War games
While the single player campaign of the original Modern Warfare was a major success, the multiplayer was undoubtedly where the real action could be found. With the massive community, seamless matchmaking and accomplished leveling system it really was an almost flawless online experience. In Modern Warfare 2, Infinity Ward have tweaked the negative points out of the equation and thrown plenty of goodies on top for good measure. 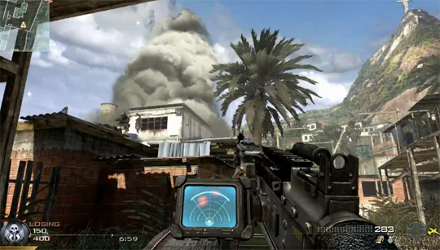 If you think that's a big boom, wait til you experience a tactical nuke

The experience as a whole still feels very familiar, the core mechanics such as the matchmaking and leveling system have remained more or less the same which I think is a wise move on Infinity Ward’s part. A few nice unlockable features include custom killstreaks (although the level of customisation is pretty minimal) and also death streaks, which give you a little boost if you die so many times in a row. I also like the special killcam that lets everyone see the kill that won the game after it’s finished. The new perks and streak rewards are all pretty handy, with the Predator missile being an extremely satisfying tool to use against campers.

Multiplayer vets will be glad to know that Martyrdom only exists as a death streak now, so the chances of getting caught out are greatly reduced. Unfortunately the noob tube is still extremely prevalent with lower ranked users. The new maps are all very well thought out, although Estate is perhaps geared a bit too much towards snipers leaving all of us non-campers at a major disadvantage. The multiplayer in Modern Warfare 2 isn’t breaking any new ground at all really, just perfecting what already exists (Which is probably the story of Modern Warfare as a whole), but after clocking up hundreds of hours in the original, I have no problem with starting it all over again.

The biggest change in terms of Call of Duty’s multiplayer is the addition of the Spec Ops mode, which gives you and a friend the opportunity to play through a selection of 23 cooperative missions. Most of the missions are based on sections of the single player campaign, except with the narrative taken out and a heap of extra enemies dropped in. While it would have been nice to play through the full campaign, narrative and all, it’s nice to see that those of us who wanted a bit of co-op carnage haven’t been completely ignored. Carnage is definitely the best way to describe the Spec Ops missions, especially as you progress through to the more difficult ones. They’re pretty strictly timed and you’ll not be able to stop for breath if you want to get all 3 stars for the mission, but in a similar fashion to the single player campaign each one is packed with action.

I was pretty impressed with the variety in the missions as well. The bulk of the objectives are standard assault or defend missions, but a couple of curve balls are thrown in as well, with a particular highlight being a tense hunt between yourself and a squad of “ghillied up” enemy snipers. Spec Ops is relatively short and doesn’t break any new ground when it comes to cooperative play, but completionists can spend a good few hours trying to get all 69 stars. There’s also a lot of scope for expanding this with DLC, and a bit more depth in the statistics tracking and leaderboards could give it a more competitive edge and a longer lifespan as a result. While it doesn’t come close to competing with the unparalleled competitive multiplayer, it’s a welcome inclusion and hopefully a precursor of things to come in the series.

Modern art
One of the main aspects of the scripted events working so well in the Call of Duty games is down to the unprecedented levels of visual polish that is applied to every one. Lighting and textures have always been very sharp, explosions and fire (which was really World at War’s biggest selling point, an indictment of how uninspired everything else was) looked great and character animations were silky smooth, especially when the action died down a bit. Modern Warfare 2 doesn’t greatly expand on any specific graphical elements in the game engine, although the fact that they are all now applied to bigger environments with more action going on inherently makes them more impressive to look at.

Explosions and damage effects have been a real treat to look at since Call of Duty 2, and what better way to improve this than simply blowing up more stuff in every corner of the map? While I wouldn’t go so far as to say the graphics look dated, Modern Warfare 2 is really just more of the same, and in particular there wasn’t a specific first moment that made me sit up and just take notice of how nice the game looked. When firing up Modern Warfare on the other hand, I was practically drooling when Captain Price first lit up his cigar while flying through a storm in a helicopter.

The varied locations throughout the campaign also allow for a wide range of special effects to be applied, most of which look really great. I particularly liked the blizzard in Cliffhanger, which blocks your vision only to dissipate momentarily and giving you a brief glimpse of a patrol heading your way. Environments are also more destructible and seeing chunks of wood, metal, masonry and chicken feathers (Ok, only in Brazil) flying through the air as you hide behind cover is an impressive sight.

Modern Warfare and World at War showcased some fantastic motion capture, particularly in more dialogue orientated scenes when the action died down, and Modern Warfare 2 is on par. Moments such as Soap smashing a Russian guard against a set of lockers and stabbing him in the neck, or breaching a room full of hostages in an oil rig all look superb. Even little touches like the way squad members check their corners when entering a room really immerse you in the experience.

Kaboom! Kapow! Kablammy! (It’s a word, look it up)
When it comes to providing a cinematic experience, I think the quality of the audio is just as important as how pretty the game is to look at. This is something that has been particularly well done throughout the Call of Duty series, and Modern Warfare 2 is no different. All of the sound effects are loud and unashamedly epic, and I get the feeling experiencing them with a proper surround setup would be pretty insane. Bullets whizz by so loudly that you’d think they’d give you a haircut (a close shave?) if they got any closer, explosions and flying rockets sound groundshakingly forceful and when combined with the constant panicked chatter between squad-mates, it helps to turn a challenging firefight into a breathtakingly tense one.

The dialogue itself is also pretty exceptional on it’s own thanks to the cast full of big hitters in the realm of voice acting, with a few movie actors thrown in as well. It helps that the script is solid and the actors all do a good job of conveying the mood of each scene. The calmer moments (all two of them) showcase some enjoyable banter between the characters, while Soap and co will mostly be going absolutely berserk during firefights and chases. Even the dialogue between stock characters is well done, as they point out enemies or objectives by using landmarks on the map as reference points. This does help to add to each conflict, and I particularly enjoyed listening to Soap and Ghost frantically shouting directions at each other while chasing an arms dealer through Rio De Janeiro, as you try to flank and cut him off. As an aside, it’s a bit odd having Gaz from the first game voicing such a prominent character as Ghost, especially considering how much dialogue he gets. You’d be forgiven for expecting him to compliment your fruit killing skills at any moment, but alas it doesn’t happen.

Buy it, try it or avoid it?
At the risk of inciting the wrath of Call of Duty’s shall we say “passionate” community, I think Modern Warfare 2 is the best game in the Call of Duty series so far. The campaign is the most spectacular one so far and while it is painfully short, even more so since you never get a chance to stop and take a breather, it’s 6 or 7 hours of epic fun. While I think that it won’t go down well in the future if scripted events are used as heavily as they are now, Infinity Ward do enough to get away with it in this case. The multiplayer again is where the longevity lies in Modern Warfare 2.

Modern Warfare has kept the gaming community engrossed for years now, and while the changes are all mostly cosmetic there’s enough content in there to keep everyone interested until the hype starts building for Modern Warfare 3. Then again, that’s probably not saying much since speculation is already rife about the third installment, but to put it another way, I haven’t seen my girlfriend since this game came out. Be prepared to say a tearful goodbye to your social life.