Match-three games are a dime a dozen, a genre about as over-played as the hidden object genre, which I still cannot grasp why they are even made. Something about ‘it relaxes the mind’ apparently. So needless to say, when Clickgamer.com entered the iTunes store to make a quick buck on a match-three style game, I immediately thought that the experience was going to be dull and boring. I expected a twitch game that kept you interested for all of five seconds before it became condemned to the shadows of your iOS icons, but were my preconceptions warranted?

I’ll take you to the Candy Town

Candy Town (which sounds like a 50 Cent song), is actually a very cute game. There really isn’t much of a story at all though, and what little does exist of a plot is all very nonsensical and not really worth the mention.

Diabetes-developing delights
The premise of the game is very simple; match three or more of the same coloured cupcakes and you gain points. It sounds basic, but there are a few noticeable variants to the genre that make the game a little more interesting. Firstly, it uses the swipe feature of the iOS devices, and you can chain as many same coloured cupcakes together as long as they are close enough together. This means you can use circle gestures, squares, triangles and arcs to burst the cupcakes off the screen. 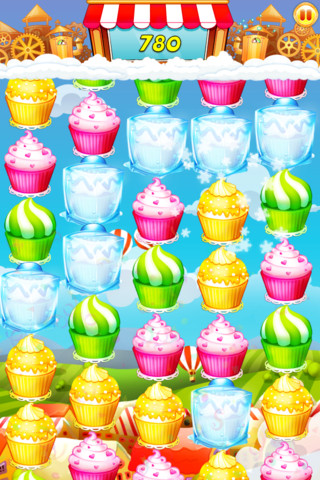 The second variant is that the screen will scroll with different coloured sweets, which means that you have to be extremely quick to chain together your score, and ultimately in the Story and Flash mode, stay in the game for longer or progress within the game. As you begin you’ll start off with three rows of cupcakes to join together, and as the story mode progresses this will increase to four or five rows.

To aid you in chomping cupcakes down like Lisa Riley after smoking a bud bowl, you have the ability to freeze the board with the ice power-up, chomp through a chain of cupcakes, substitute a colour with the multi-coloured cupcake, and also bomb confectionary out of the playing field. All of these power-ups need to be utilised in the time-based game modes to have any chance of progressing.

There’s also an Endless mode which does what it says on the tin, allowing you to play the game at your leisure. As an added sweetener, the game utilizes Crystal for leaderboards and achievements. 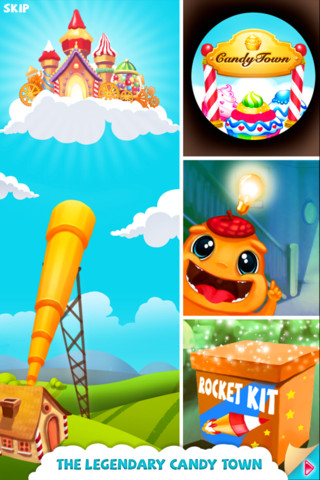 The story mode is rather pointless.

So cute!
Candy Town is one of the cutest games I have played on the iOS platform. The colours are so vast and vibrant that it lights up your mobile device with a juice of camp fanfare. The creature that chomps on the cupcakes is adorable, and the graphics are well presented when chaining combos or using the bomb, chomp and freeze power-ups.

Audibly grand
The game’s sound is also delicious in itself, full of interactive trinkets and bells with background audio that is very much upbeat. The charming overall presentation of Candy Town is definitely one of its strong points. 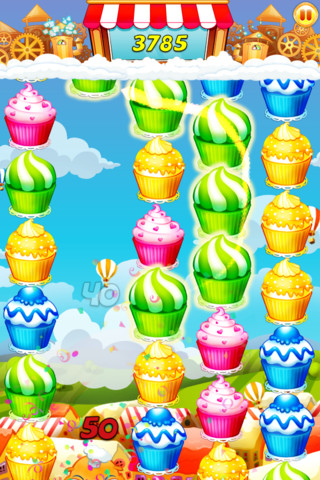 Have your cake and eat it?
Whilst the game is fundamentally simple it is challenging, and is a great distraction on journeys to and from work. What it doesn’t have is particularly strong addictability, but for shy over 60p, just to sample the visual delights this game has to offer and its quirky swipe-based gameplay, it’s a bit of a no-brainer really.

Candy Town is a ‘sweet’ game with the cutest of vibes; it’s got plenty of sass and will appeal to the girliest of gamers.