Ever since EA stopped making good versions of Sim City, several companies have tried to make their own versions of the popular city building game to saté the demand of all the mayoral wannabes.

Perhaps foremost among these is the Cities XL series, which has been digging out itself a niche. Now, Cities XL 2012 has just been released. Does it add much to the series? Or is it more of an incremental upgrade not worth the planning permission?

This is how Cities are made

For those who don’t know about the Cities XL series, it was originally a massively multiplayer game designed for players online to build their cities and trade among themselves. Unfortunately, the servers were shut down and so the latest version is devoid of any multiplayer content.

Instead, you are presented with an area based upon real world terrain (chosen from a globe view) and from there you set up the road system, zone out areas for residents, industry and retail, and then watch the people roll in. There is a huge number of unlockable buildings, ranging from varying densities of housing up to landmarks, with every service in-between. I’m not keen overall on the way these games limit you to certain tiers of workers and industries by population, which seems a little counter-intuitive. 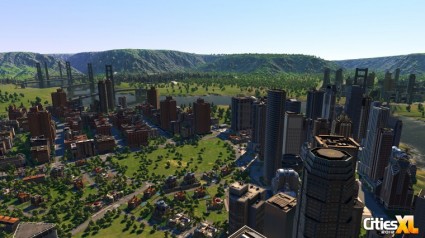 The cities start out pretty normal...

Each city requires resources to survive, but not every map includes all the fuel or food resources you need. This is where the multiplayer lineage is apparent as you can trade between the various cities you have made via trade buildings. It is a very strange system, which is cool, but does very much feel like it was the developers fixing a system that had most of its back-end ripped off.

Despite all of this, the city building still feels really powerful; if you had the time and inclination you could quite happily build model versions of most of the world’s cities. Cities XL includes several real world landmarks just to add a little extra to your starting city. However, these are the end-game units that take a lot of time and resources to build.

The main thing that 2012 adds is a huge selection of new buildings complete with new models to include in your city. Many of these are part of the various location packs, which allow you to customise your city to have a certain look, be that of a traditional medieval European town or a snowy hotel complex up in the mountains. It does certainly make your cities look more visually themed as opposed to the generic American towns, but overall they are simply alternative models for other buildings.

Another new feature that will make all the budding architects glow with pride is the inclusion of a tool that allows users to import models from their favourite 3D modelling programs, to make your own custom models into brand new buildings. It is a great feature that is perfect for this sort of game.

Towering buildings, microscopic framerates
Although 2012 adds some brand new objects, the engine it is running in is starting to show its age. It does the job alright, but it’s not exactly beautiful. The buildings, cars and terrain are all realistic, but the characters are stylised monstrosities which does break the immersion a little bit. The day/night effects look pretty good but they play no part on the gameplay, which is a little disappointing. Overall, don’t come to this game for its looks. 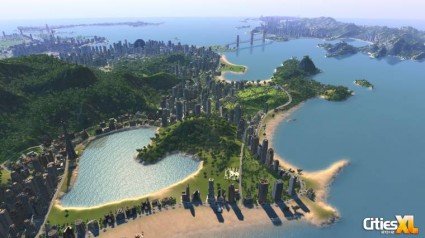 ...but can end up sprawling for miles and miles.

The real issue with Cities XL is the fact the game can run horribly even on powerful systems, due to the old engine which doesn’t support multi-core systems. On both of my machines it randomly hitched up at various points, dropping down to single digit frames per second. It gets worse when you eventually get to huge metropolises, which can make the game nigh unplayable.

The sounds of the city… quieter than expected
To be honest, the sound in Cities XL 2012 is nothing really to write home about. It is a nice ambient sound, which works well when tinkering with your city or waiting for citizens to move in. For the rest of the time it’s barely noticeable. Thankfully, we are spared any questionable voice acting.

The city goes on
Cities XL 2012 is perhaps the best city builder in the past few years. It has a solid core but the outer edge is a little rough. It is very easy to pick up and play and be building your own metropolis. However, I think it is a little overpriced when bought as an expansion; it doesn’t contain enough new stuff for its price tag.

So as a brand new game, try it. As an existing player, though, only the hardcore Cities XL players should pick it up.