Sometimes cars get fed up of driving around in circles and racing for the finish line. When this happens, what should they do? Well, how about arming themselves to the teeth with missiles, machine guns and bombs, and blasting the utter shit out of each other instead? This is the concept behind Crasher, a new MOBA, or Multiplayer Online Battle Arena game (don’t worry, I’ve never heard of the genre either), from the fledgling game studio Punchers Impact. Crasher is available for download now from the Steam Store.

Sounds awesome on paper, but will the developer’s inexperience and low funding get in the way of them reaching their ambitions? Will Punchers Impact come out on top with their efforts, or will they ultimately just Crasher and burn? (Ugh, that was awful…)

As far as I’ve seen, there isn’t really anything that even resembles a storyline to flesh out the gameplay with. Not a lot is explained about why you’re blowing each other to smithereens; you’re just left to get on with it. It’s definitely apparent that you’re in a post-apocalyptic world, so I can only presume that the story is that everyone is bored now the Internet and daytime television have been eradicated, so they amuse themselves by killing each other.

Total carmageddon
You can understand their decision, because the battles to the death to be had in Crasher are bloody good fun. Fifteen different vehicles are at your disposal from six different classes: Tank, Defender, Melee Destructor, Range Destructor, Repairer and Constructor; these are all self-explanatory in their abilities. They have several skills each, along with weapons and bonuses that are customisable to your liking. Unfortunately, each vehicle can only be chosen once, which stops boring battles of everyone having the same attacks, but means there’ll be playground style tantrums if someone nabs your favourite from under your nose. 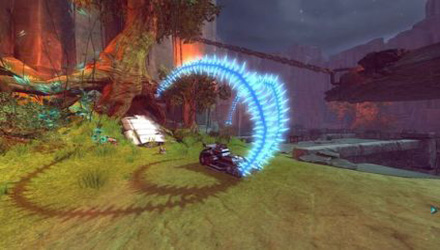 I whip my hair back and forth...

Two modes are available: CTC (Crasher Territory Control), where your team has to secure capture points, and CBA, as in, “Can’t Be Arsed to mess about with all this objective crap; I just want to shoot things”. The cars whizz around each other like deathly figure skaters, trying to lay as much hurt on their opponents as possible with their armaments, and skills that are cast like spells from an RPG, with cast-times and cooldowns. The downside of this is that a lot of the time you’ll have expended all of your attacks, and will have to either let your automatic-fire mounted weapon do the job, or make a hasty retreat to recharge. While this is happening, you can at least zoom round the level hunting for pick-ups, like health and shields.

The majority of online games these days include RPG-like elements of levels and unlocks, and Crasher is no exception. Participating in battles earns you experience to allow you to go up levels, and different weapons and perks are unlocked, increasing your health, attack or speed for example. If anything, there don’t seem to be enough, and they don’t get unlocked fast enough. Perhaps I’m just greedy and impatient.

Crasher’s roster accommodates all playing styles, letting you be nippy and hard-hitting, hefty and difficult to take down, or have a utility style in healing your teammates or setting up turrets. Some of the abilities are quite imaginative, like turning your vehicle into a flaming meteor that crashes down, or creating an irritating field that leaves your opponents floating in the air like sitting (or hovering) ducks. The gameplay is exhilarating and keeps you on your toes, but unfortunately Crasher has far more than its fair share of shortcomings. 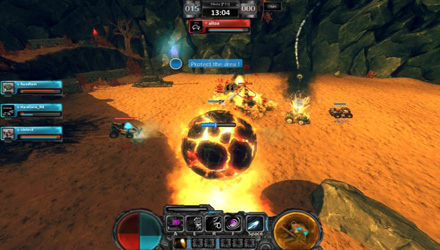 Bitches be all over mah balls!

Firstly, the controls are more awkward than steering a car with your feet whilst playing the violin, implementing a standard WASD movement, but requiring holding right-click and moving the mouse to turn. You also need to use mouse movement to aim your abilities, which are activated by the number keys and set in place if required by the left-mouse button. This really isn’t conducive to fluent combat, and will have you cursing like a madman whilst you spin around in front of your foes and launch rockets in the opposite direction.

The selection of levels is also extremely paltry, providing three CBA maps and just one CTC map. They are well built and have some interesting features, like Eruption, requiring you to head to higher ground whilst the map fills with scorching lava. The pitiful selection, however, means that you’ll get tired very quickly of always playing in the same environments.

The general polish of the game is sorely lacking overall. Both network and performance problems are rife, with servers quite often jittering along or completely losing connection. Game-breaking bugs pop up on a regular basis, like getting stuck in scenery, everyone being able to talk but do little else, and once my vehicle inexplicably decided that obeying the laws of gravity was getting rather dull and that flying around the level would be much more fun instead. That was awesome while it lasted… but really not acceptable. On both of my computers that happily handle all recent releases at reasonable graphics settings, Crasher stutters around if the settings are increased much further than minimum. 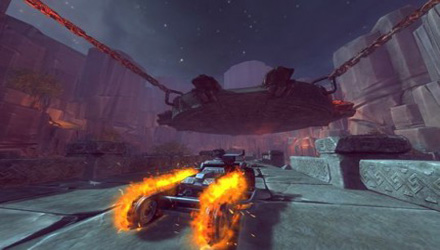 Crasher definitely feels like it’s still in the beta stage. It’s a work in progress, with the developers frantically releasing huge patches weekly or even more often, but it’s still not enough. The game had blatantly gone over budget and was rushed out of doors far too soon for it to be considered a finished, quality product.

Have Punchers made a visual Impact?
The visual style is surprisingly attractive, opting for a cel-shaded look that closely parallels Borderlands. Areas are created with an interesting artistic direction, especially the CTC map Entalia, featuring ruins and statues amidst a fantasy-esque landscape. Crasher is colourful and quirky-looking, with the graphics arguably qualifying as one of its main strengths. Unfortunately, due to the terrible optimisation that I mentioned, you’re unlikely to see the game at its best, unless I’ve just been particularly unlucky. 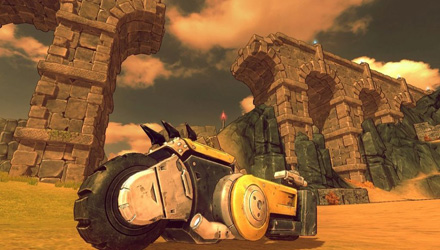 Good luck getting the game to look like this, if your computer isn't powered by a nuclear reactor.

Rev it up?
The audio is not quite as exciting as the visuals, comprising of a generic techno-rock soundtrack that fails to get you pumped, and some fairly naff sound effects at times. Little is particularly offensive, but the lacklustre sound generally just inspires a feeling of indifference. The game has a lot more to be worried about than its less than stellar audio, in all honesty.

A Crashing defeat?
I love the concept of Crasher, and quite often it’ll really get your blood pumping and its essentially solid gameplay will shine through. That said, it’s little more than a failure overall and does not even begin to live up to its potential, as it just plainly isn’t finished. So much about the game is broken and absent, like its pathetic selection of levels and the fact that there is only one Steam achievement… one that doesn’t even work.

One all important deal-breaker is that everyone else has obviously gotten wind of Crasher’s issues, or hasn’t even heard of it in the first place, because barely anyone plays it. This is a few weeks after release, when the game should have been well-marketed and have built up a strong community by now, but the servers are like a ghost town. Sometimes there are ten people playing at once; sometimes there are zero. Just to put this in perspective: there are no bots, and no single player modes. Real people are your only way of playing the game, unless you like driving round all by yourself all day, shooting at rocks. 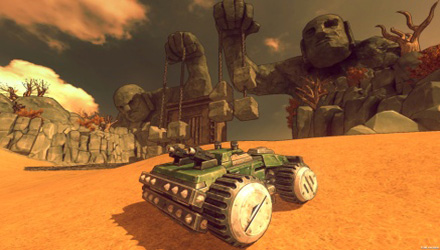 It's just you and me, creepy statue dudes.

It’s disappointing when I think about what Crasher could have been. So much potential has been wasted by its obviously inadequate budget, and unimaginably poor planning. At the end of the day, creating video games is a business, and they just can’t have an infinite supply of money and resources poured into them. That also means, however, that if the end result is inadequate, then it’s not worth the consumer’s money. As a result, although it saddens me to say it, when it comes to Crasher, I recommend that you steer clear.