When you mention Harmonix you think of plastic guitars, shameful karaoke and scaled down drum kits. You certainly don’t think of flailing your arms and legs around your living room to the latest and greatest club tunes. That’s right, Harmonix has decided to take a slightly different route and has opted to jump feet first into the creation of Dance Central, one of the most exciting and hotly anticipated titles for Kinect, a game that claims to be able to teach you how to dance. This is of course not a guarantee, and if you have two left feet and no sense of rhythm whatsoever, do not expect miracles.

At the moment Dance Central doesn’t really feel like a party game, nor does it exactly feel like a training game either. There is no doubt in my mind that Dance Central will be a hit at house parties because you can’t beat a bit of drunken flailing about to bring in the new year, but in my opinion this could have really benefited from some sort of Story Mode. As it stands this is essentially Lips but with dancing instead of singing. Where it may have been a bit strange for Guitar Hero to suddenly introduce some epic career mode, it really workedas it also did for Rock Band, which included a system where you gradually gained fans and worked your way up to stardom. A series of dance offs would have been an improvement perhaps, working your way up from basic rookie to master dancer, giving you the chance to earn the support of fans and fellow dancers alike.

Break it down and bust a move
Dance Central will break you out into a bit of a sweat if you’re not the fittest person in the world, such as myself, but from what I could tell there is no serious dancing skill required here. This is not a bad thing in my books as the lack of any seriously masterful dance moves gains thumbs up for accessibility. A lot of the actions are very similar and will be expanded upon with each song. This kept a nice feeling of familiarity and helped with my pathetic short-term memory. That doesn’t mean this is an easy game to play though. While some of the moves may not be the most complicated, some of them are extremely high impact or will require you to remember starting positions, footing and sometimes exact angles for your arms.

It always pays to take a quick master class in each song before you perform it for the world to see, and this is possible with Break It Down mode. This mode allows you to slow down some of the moves and repeatedly practice them until you get it right. That is unless the virtual trainers gets bored of watching you fail and just move on in the hope that you will suddenly pick it up in the next lesson. 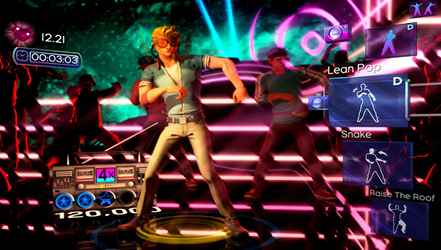 Thankfully, you don't have to mimic your trainers fashion sense

Once you have acquainted yourself with each dance through a quick training session with the Break It Down mode, you can jump straight in and start earning high scores and stars for your performances. After earning four stars on a set amount of songs you will then be given a challenge which will incorporate all of the moves you have learned so far into one huge mash up. Obviously these get harder as you go along with more moves to recall from memory and longer performance times. As you move up in terms of difficulty, the speed and pace of the dances become more intense, and a few more difficult moves are thrown in for good measure to keep you on your toes.

There are a variety of different dance trainers that are chosen for you at random unless you happen upon a favourite. None of them differ in any way aside from appearance and level of vocal annoyance. In the middle of each routine you are given the chance to show off your very own choreography with a few friends if you desire and capture every single moment of it. The shame of seeing your performance sped up afterwards is both entertaining and absolutely mortifying, but hey, that’s what friends are for right?

The game is sometimes very forgiving if you’re not doing it quite right, and will give you a round of applause for essentially just standing in the middle of your living room and sipping on a beer when you should have been doing something completely different. Other times though you have to be so precise that it really does seem to be a little bit unfair when you can clearly see that you are doing exactly what your virtual dancer is, but it tells you that your arm or your leg is in the wrong position. When this happens, the Kinect sensor is usually content with a quick flail of rage and lets you off the hook. This could be an issue with the set up of the Kinect hardware, but I have tried the sensor in several locations and had the same issue.

For those who have had formal dance training this will surely be easy as pie. For those of us who have not danced since being forced to in school during shameful P.E lessons, this will not be so easy. I found that the style of the song tended to indicate the difficulty and not necessarily the difficulty rating the game provided you with. It was also a lot easier to dance along to the select amount of songs I already knew and enjoyed, in comparison to the ones I was not familiar with, which in turn felt more difficult and confusing to grasp. 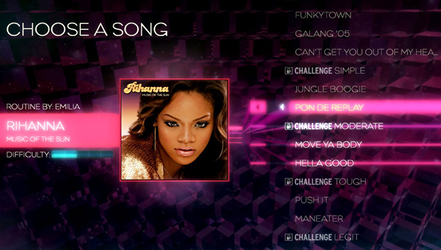 The start of a labyrinth of menus

Workout mode acts as a tag-on to the other modes and adds a calorie counter to the top left corner of the screen for those of us who want to shift a few pounds, or at least shave off a few calories so we can have that chocolate bar and not feel too guilty about it later. The only problem is this; there is no way to create a seamless set list of songs, so workout mode can feel extremely disjointed and doesn’t really provide the high action workout some players will be looking for. This is a general problem I had with Dance Central due to actual playtime feeling severely broken up due to the countless menus you have to navigate in order to get to the next song. This is another reason that a structured Story Mode would have been a huge advantage.

Haven’t I seen you around before?
The graphics of Dance Central really cannot be faulted. A crowd surrounds you as you bust out your moves and the character models are essentially the same as what you would see in Rock Band and Guitar Hero, as if just to remind us of who exactly made this game. A clearer representation of your body and its movements in the top right hand corner would have been preferable to an occasionally blurry and greyed out silhouette, but you can’t have everything in life. A more exciting menu screen would also have been nicer, but there is a limit as to what you can really do with it before it starts to become over the top.

Un cha un cha, un cha un cha…
When it comes down to musical choices, it has to be said that Dance Central does not cater to my musical tastes at all, but while the selection of songs may not be to everybody’s taste, with a rather unbalanced mix of modern hip hop and retro classics, it is definitely a fun experience. I have said this about previous Harmonix titles and the same still applies with Dance Central; you will never keep everybody happy when you include music as a focal point in a game. If Dance Central were to cater to my music preferences, then there would be little to no dancing and a bit more moshing and head banging, and let’s be honest there’s no real skill, or indeed fun for that matter, in throwing yourself around the living room and likely breaking everything and everyone around you. Naturally the influx of DLC has already started to pour in, providing players with a broader choice of songs but with no indication of the difficulty level before you purchase, try before you buy should really be introduced here. 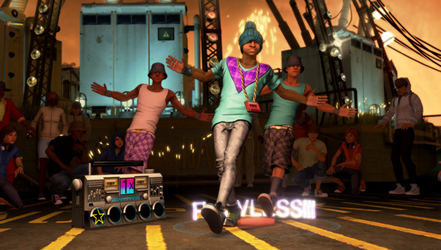 One of my major gripes is this; none of the songs appear to be full length. This for me is just not on. This is like giving me half a song to play on the guitar, and is more like watching the X Factor with some half-assed attempt to cut a song into its best bits. If I’m going to dance and make a fool of myself, I sure as hell want to dance along to the whole thing, not just one verse and a repeat of a chorus.

Two’s a crowd, three is just impossible
Currently there is only a battle mode in which players will literally battle it out with each other for the best score in a song. Do not think that this means you will be busting your moves side by side though. Each player will have to jump in and out of the song and take it in turns to strut their funky stuff. This may be for the best in terms of avoiding physical injury and for the sake of keeping your living room in one piece, but the lack of synchronised fun is a little bit of a hindrance to the fun we were promised in early previews and live demos. This will likely not be amended however, unless players are willing to knock through several walls to increase the size of their virtual dance floor.

Save the last dance?
Dance Central is an exceptional early release for the Kinect but is limited by the occasional hardware issue which can make playing it a very frustrating experience. While it may have a whole list of faults and even though I may not be very good at all the dances the game has taught me, it will be making a bold appearance at any parties I have so that myself and friends can all look like prats together under the drunken illusion that we have some mad dancing skills.