The Dead or Alive franchise has recently been lacking in any titles that actually take its fighting roots seriously, opting instead for spin-offs making the most of its pretty girl characters and famous boob-jiggling physics. For the last few years, the majority of releases in the series have replaced brawling with volleyballing, special moves with sunbathing, and combos with camera voyeurism. Enter Dead or Alive: Dimensions, choosing Nintendo’s new 3D handheld as the platform on which to get the series back on track.

My review of Super Street Fighter IV: 3D Edition left me seriously impressed all round, so Team Ninja have got their work cut out to live up to Capcom. Should they have just stuck with totty and titillation? Are the series’ fighting foundations truly Dead, or still very much Alive?

Gratefully received after Street Fighter’s lack of a proper story is Dead or Alive’s Chronicle mode, vaguely weaving together all of the characters and plotlines present in the series to date. I say “vaguely,” because most of the time I genuinely had no idea what was going on. The main gist that I desperately managed to grasp of the game’s exposition is of a rather dodgy company called DOATEC, which has some shady goings on behind the scenes, resulting in the subsequent reveal and termination of said shady goings on. 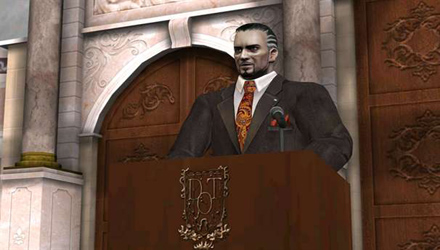 Never trust a man with a haircut and tie this dreadful

Chronicle’s five chapters erratically leap from scenario to scenario in lengthy cut-scenes, shuffling between different characters and settings, and shoehorning remarkably brief (and sometimes completely unrelated) fights in-between. The cut-scenes are very pretty and dramatic, but oddly the characters are rarely animated, acting as if they are action figures stood around, with someone pulling a string in their backs to make them talk. Maybe the team’s animator got fired part way through development?

Nevertheless, Chronicle mode is a welcome inclusion that comprises of a few over-the-top hours of bewildering fun. Its prevailing merit is that much of it is essentially a glorified tutorial mode, gradually guiding the player through learning the different types of attacks, combos, counters and other necessary facets of battle. For total amateurs (like myself), this is an absolute godsend.

It’s alive!
Dead or Alive’s fighting style contrasts greatly with Street Fighter, discarding fireballs and magical flying headbutts for something a little closer to the ‘realism’ side of the scale; fast and intricate combat emphasising chains of moves, and judging the situation correctly to administer counters. Thankfully, this means that the 3DS’ already limited library hasn’t now been populated with two games that are exactly the same, and the two different styles nicely complement each other. 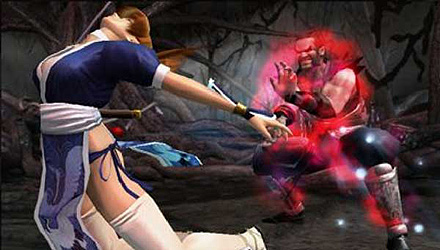 Oh sorry; I said this was more realistic, didn't I? Did I forget to mention the bad guys with magic powers, and the genetically modified superhuman fighters?

In my opinion, the fighting style and control scheme are a better fit for the Nintendo 3DS than its rival’s, leading to far less exasperating fits of rage at failing the same combo for the umpteenth time in a row. The bottom screen serves as a handy moves list that is also touchable to activate the combos, although in practice, this is far too fiddly and distracting to be of much use.

Along with Chronicle mode, Dead or Alive: Dimensions also offers a deluge of other game types for solo players. Arcade challenges you to win several battles in a row in as fast a time as possible, Survival pits you against an endless onslaught of competitors with no breather in-between, and Tag Challenge pairs you with an AI fighter, taking it in turns to face increasingly difficult foes.

The depth of these three modes is a little short and sweet, but altogether when combined with Chronicle and a Free Play practice mode, the single player offering is much more extensive than Street Fighter. Extra bonuses include Throwdown challenges received by Streetpass, which emulate the player’s fighting style through AI, and a whole hoard of unlockable costumes and character figures to collect. You’ll be kept busy for a fair while, especially if you fancy viewing and taking photos of the trophy figures in Showcase, a mode pervy enough to get the game banned in several countries on grounds of paedophilia. Ho-hum.

Tell me your… dimensions
Aside from the peculiar cut-scene animation (or lack of it), Dead or Alive: Dimensions, on the whole, features some of the most impressive boobi… I mean, graphics, I’ve seen thus far on the 3DS. The visuals are crisp and full of detail, on par with some of the best efforts of the last home console generation. Character models are excellently crafted, as are the level aesthetics, and great lighting effects are the icing on the cake. 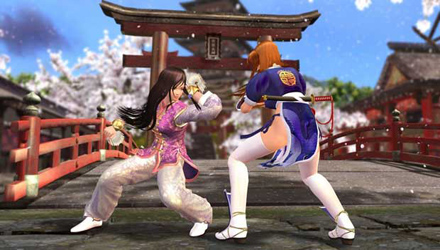 The 3D effect isn’t overly remarkable during regular battle, but is put to good use during cut-scenes, menus and in the short scenes where characters dramatically topple onto a lower section of the stage. Unfortunately, as with Street Fighter, 3D enabled gameplay runs at 30FPS, whereas fully switched off, the frame rate doubles. This is noticeably more smooth and responsive, so is recommended for any competitive multiplayer fights.

Fighting talk
Dead or Alive’s audio mostly does the job well, mixing upbeat music tracks with the boisterous sounds of people getting their face kicked in. It all sounds engaging enough, albeit nothing to write home about. One of the worst aspects is the sometimes dreadful voice acting, which includes some cringingly cheesy one-liners that are repeated over and over at the start and end of battles. On the other hand, this does add to the typically over-the-top bombastic fighting spirit.

A match-made in heaven?
Fighting games are a competitive breed, so a multiplayer mode is right up there as one of the most important inclusions. As well as local play, Dead or Alive comes equipped with an online mode, matchmaking you against brawlers all over the world. Similarly to Street Fighter, winning or losing fights places you in a rank from F to S, and in an interesting touch, people are allowed to wimp out if they’re matched against someone above their experience level (not that I’d ever do that personally, of course…) 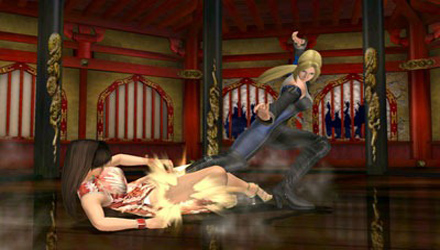 Never kick a man while he's down. A woman though? Go ahead, apparently.

Players can choose whether they’d prefer 2 or 3 rounds, and to pit themselves against the entire world or just others in their region. Sadly, regardless of your choice, network lag is rampant. It’s disappointing in such a fast-paced game relying on quick wits and reflexes, when the action is stuttering along like you’re back on 56k. A great shame, as other than this the mode is excellent, but the poor network is just inexcusable at times.

Dud or Alive?
The 3DS library is unfortunately still a bit sparse at the moment, especially in the way of original releases. For this reason in particular, I would definitely recommend the purchase of Dead or Alive: Dimensions, but that’s not to say it isn’t a good game in its own right. Network lag lets down the otherwise solid online multiplayer, and the quirkiness may confuse and alienate at times, but overall the game has a lot going in its favour. Boasting perhaps the best visuals so far on the 3DS, some top-notch gameplay and a richer solo experience than Street Fighter, Dead or Alive is undeniably one of the strongest contenders on the console.