Games that don’t take themselves too seriously have become something of a rarity these days. The types of titles that spoofed and poked fun at themselves as well as other areas of the media were once released in abundance, but seem to have become lost in the gritty and realistic seas of greys, blacks and browns that make up the vast majority of games on the market in these times. That’s not to say that comedy games don’t appear at all anymore, Tim Schafer’s work stands testament to that, however comedic releases have been too far and between for my liking.

Vicious Circles ‘Eat Lead: The Return Of Matt Hazard’ (released February just gone) was one such title that tried to come in and fill part of the void. Having managed to pick it up fairly cheaply not long ago, and figuring that with the unusual glut of high quality first-quarter releases it would have slipped under many people’s radars enough so that it’s probably still worth evaluating. Read on to find out whether I laughed or cried after parting with my spondoolies.

‘This joke isn’t funny anymore…’
Eat Lead takes place in a world where the lives of videogame characters don’t just end when someone isn’t playing their games; they have lives outside the industry, and Matt Hazard (voiced by legend Will Arnett) is a character whose popularity had seen a spectacular fall from grace. After a successful early career stemming from 8bit side-scrolling shooters (an obvious nod to Duke Nukem), Matt secured a new contract with his developer ‘Marathon Megasoft’ that allowed him more creative input into his games, his subsequently skanky games nearly ruined the company.

After years away from the public eye in light of his indiscretion, Marathon Megasofts newest CEO Wallace Wellesley (Neil Patrick Harris) decides it’s time to bring Matt out of retirement, only he has an ulterior motive in doing so; to kill Matt off once and for all. Using his team of developers he has the ability change the environment around our protagonist, code in enemies from his previous games and generally make things difficult. The player as Matt must complete the game to foil Wellesley’s plans with the help of the ‘Cortana-alike’ QA, while taking snipes at all areas of the industry in the process. It’s here where we find our first issue with Eat Lead; the humour.

You see, the gags and parodies you find within Eat Lead are very hit and miss; at their worst they are absolutely terrible and predictable, at their best are mostly only worth a chuckle. The problem with this is that if your game is being sold primarily on how funny it is it pays to keep that humour at least consistent. While the actual gags are lacklustre, there are one or two extremely clever set-ups which had me laughing, such as the battle against a stereotypical J-RPG protagonist in which he selects his attacks from a menu, but these moments of true inspiration are rare. There are too many nods and parodies to name them all, but it pokes fun at the likes of Mass Effect, Bioshock, Tomb Raider, Duke Nukem and many many more. Overall it’s like they were aiming for a ‘Spinal Tap’ style satire and ended up at the crude ‘Scary Movie’ parody style instead. Not brilliant when you consider the game has other issues, which we’ll approach very shortly. 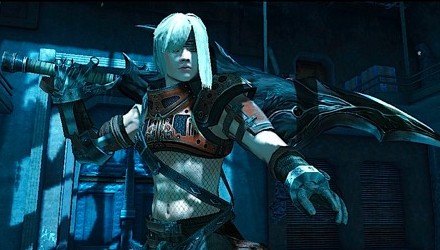 Could actually be from any J-RPG ever...

‘It’s Hazard Time’
Playing like your normal ‘stop ‘n pop’ experience; nearly everything about the cover and shooting mechanic is fairly accomplished, or at least it feels that way very early on. Eat Lead features a clever ‘cover-to-cover’ system as seen in the likes of Wanted: Weapons of fate; from behind cover you can look at your next location, hit the required button and Hazard will run there automatically. The cover itself is semi-destructible; if it takes enough damage it will ‘De-raz’, leaving you exposed.

Occasionally there were times I found the aiming to be a little unresponsive as if there was a dead space in the centre of the analogue when popped out from behind cover, however in comparison lining up shots while in cover it was almost too easy; letting me rack up an unprecedented amount of headshots. Over the course of the game you will earn a couple of powers in the guise of ice and fire, and occasionally you will come across power-ups such as temporary invincibility. The combat flows well and remains fun throughout, however I did discover a notable glitch here; if you don’t snap to cover, and creep out just enough to land your cross hair on the nearest enemy you can shoot through walls and negate the cover mechanic altogether.

At times the experience is dogged by awful A.I.  Occasionally if you rush to cover too deep in the map, the enemies seem programmed to go to certain positions and won’t deviate from that path, which can have them running directly at you leave you heavily under fire. This can lead to other problems, a couple of times in small rooms I made a run to the right and sought cover there, but the enemy didn’t counter that by taking a different position and just kept running right at me, after a couple of attempts I realised that the only way around it was to head to the left and then take out my attackers; this was pretty early on in the game and it’s something that becomes more obvious later on as you are faced with more foes.

Another sticking point to an otherwise fun system is the mediocre level design. The game is fairly linear, which I have no problem with as long as it suits the story or other areas of the overall package make up for it; here it really does neither. You fight your way through a samey section of corridor until you are faced with a contrived reason to be locked in a particular area. There you face a few waves of enemies and then you are back to the corridors again. Rinse and repeated until you finish.

The enemies themselves are extremely varied, ranging from zombies, to cowboys all the way to space marines. Each type has its own set of weapons that you can pick-up along with their own level of power and weaknesses. For example, zombies can only die from headshots; space marines require an unholy amount of ammo from non-futuristic guns. Each weapon is different, but the way the game tends to concentrate on throwing certain enemies through particular passages of play, you are never really left in a situation where the weapons you have aren’t effective, leaving little room for inventory strategy. It also has that light feeling when firing, almost like a weightlessness that is reminiscent of the Hitman games. 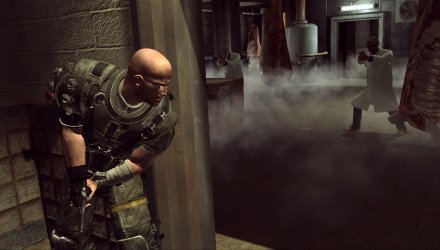 SHUT UP ABOUT YOUR COVER-TO-COVER MECHANIC!

Visual humour
Graphically Eat Lead is pretty clean looking and in some areas well stylised, however with the long levels the environments tend to get very tedious very quickly. The character models are well rendered, and there are some really neat touches; for example seeing the 2D ‘Waferthin’ soldiers navigating a 3D terrain is an extremely cool visual feat, but with that comes inconsistencies. I mean, if the Waferthin get introduced in their retro form, how come the rest of Matt’s enemies from previous games are fully rendered by today’s standard? It doesn’t quite add up. It’s definitely not what I’d call an ugly game, but it won’t win awards for graphical achievement either.

Repetitive audio
Despite having two fairly big names on the box cover in Will Arnett and Neil Patrick Harris, who both put in decent performances despite the sketchy material they were given, the repetitive speech will be cause for annoyance for many. I lost track of the number of times that Matt Hazard exclaimed ‘I love this cover-to-cover mechanic’, and other such unintelligent one-liners when popping heads and the same is true of the enemies too.  The soundtrack is adequate, yet uninspiring. It kicks in when in the full flow of the action and lulls in the quieter spells, which are few and far between. I had some technical issues here too, where the action-packed audio would cut to silence for little reason.

Is eating lead hazardous to your health?
I’ve picked up on a lot of chinks in Eat Leads armour in this review, but the overall gameplay experience is competent and there are some rare genuinely humorous moments to be found amongst the dross. It had enough at least to keep me playing through to the finale, but whether others can be bothered to persevere and find enough fun in the combat against lot of repetition and poorly written gags is another thing entirely. It is just about worth a look at the right price; if only just to experience the sheer random brilliance of killing a zombie with a super-soaker.

I think I’m clear in my conclusion, if you see it at a no-lose price; snap it up, at the very least it’s worth a rent in a meagre release period.