As part of Popcap’s quest to dominate the casual and puzzle market, they have been known to acquire smaller, independent studios along the way. One such smaller studio is Spintop Games, who haven’t exactly set the world alight with their contribution to the industry (I’d never heard of them before), however their latest game, Escape Whisper Valley, became available to purchase through Popcap and has received a fair amount of marketing. Billed as a ‘Hidden Object Game’, I had no idea what to expect when going in. The title intrigued me, but the premise intrigued me more in what I found to be a very strangely put together package.

Implying there’s a story when there really isn’t…

To hear the chilling music, see the title and the opening screens, you’d be forgiven for thinking that this was not your typical Popcap game. All signs seem to point to some sort of dark narrative, but there really is no narrative at all. The premise of the game is to escape from what seems to be a remote and deserted Silent Hill-esque American town called Whisper Valley. With this you’d expect a point and click game, or something that requires investigation, only bizarrely, the way to escape is to find objects from a 2D image and occasionally solve puzzle mini-games. The grand finale is the only scene that requires any lateral thinking and it sticks out like a sore thumb in comparison to the rest of the game. It’s a set-up that is bizarrely inconsistent, and it comes across scatter-brained. Thankfully, the core gameplay mechanics do actually work in the midst of a game that doesn’t quite know what it wants to be.

‘Where’s Wally’ crossed with Silent Hill…
The main bulk of the game seems to take inspiration from the old Virgin Digital Music quiz that did the rounds a few years back. You are presented with a picture of a decrepit and cluttered area, such as a library or train station and provided with a list of ten items to locate. To tick an item off the list you simply click on it. Some of the items in the list might be presented as cryptic clues, or they might require you to fulfil certain criteria, such as using tape to repair a wire, or putting items in a box. The items themselves are very well integrated into the environments, with a lot of items either acting a part of the scenery, camouflaged cleverly or just represented in a way that you wouldn’t expect. The game has this ability to leave you sat looking blankly at the screen for ages when the answer is right under your nose, and it’s here where the game really excels. For the more visually challenged amongst us, the game offers a hint system, which once used highlights the area of something you’re looking for. This can be used many times but there is a short regeneration period before it can be used again. 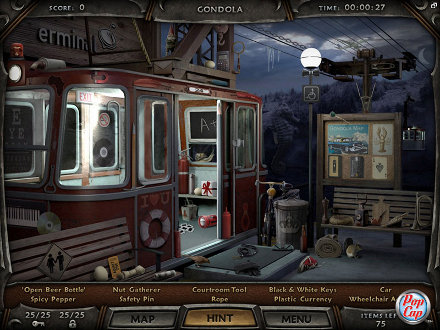 Don't ask me why there's a gnome in this picture.

The game is separated into twenty-five levels, with each level giving you a couple of these cluttered locations to search for items in, and a time limit to in which to complete them all. The main problem here is that there are also twenty-five of these locations too, but as a level can have up to eight of these, the locations get boring very quickly. The game tries to balance this with the huge amount of items in each stage meaning that you’re looking for different objects each time, but it really doesn’t help with the repetition. In this sense, twenty-five levels is probably too much for the main mode, and you’ll find yourself going through the motions by the end.

What is left of that time limit after beating all locations in a level is used to complete one of seven totally unrelated puzzles, and finishing a puzzle will unlock a ‘clue’ to escaping the town. Once you’ve powered through and found all the clues, you’ll be left to assemble them in the form of a jigsaw, before you’re left with the only lateral-thinking puzzle to complete the game. The puzzles themselves are a total let down and are painfully easy. Whisper Valley features four variations of a jigsaw, a tile sliding game, a wordsearch, and a Bejeweled clone. These feel like completely arbitrary additions, included only as padding to prevent a one trick pony from getting old. Only if that was really the aim, they fail miserably. The only one of these mini-games with any depth is the Bejeweled clone, which managed to earn itself status as one of two unlockable modes. This is a slightly different take on the Bejeweled formula, whereby you have to eliminate the grey squares behind the items to complete the level. 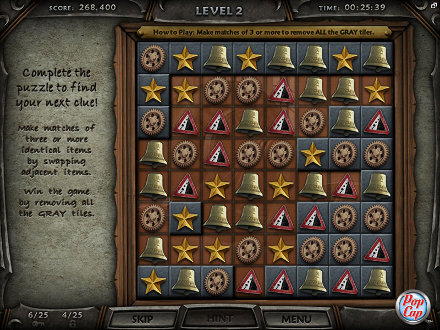 The other mode to unlock is ‘Unlimited Seek & Find’, which is easily the best mode of the lot, and probably a lot closer to the original concept that what the clustered main ‘Escape’ mode turned out to be. Without the mini-games getting in the way, you’re left to go through all the stages finding every item on each (hundreds), which makes for a far more relaxed and focused experience. To unlock both these modes, in each stage over the main game you will find one hidden lock and one key that you can click on; find all twenty-five of each, and these two other modes will be at your disposal.

As pretty as a picture.
The artwork in Escape Whisper Valley is a particular highlight, and goes some way to recapturing some of the atmosphere that Spintop have tried to create against what is a basic puzzler. The backgrounds, of which you’ll be looking at a lot over the course of the game, are all greatly detailed, that raises a very rustic, old fashioned feeling, while adding a touch of loneliness with the desolate nature of the environments. The objects and items all blend seamlessly into the backgrounds, which is essential to a game that is all about making you miss the obvious.

Sounds like a not-so-Silent Hill.
While there’s not really a lot to say about the soundtrack in Escape Whisper Valley, the music is actually very well produced. It’s a genuinely creepy track that conjures up images of the likes of Silent Hill, and as such I’m sorry to say that I think it could have been put to far better use in another game. It does suit the feeling of isolation Spintop were aiming for, so on that front it does succeed. 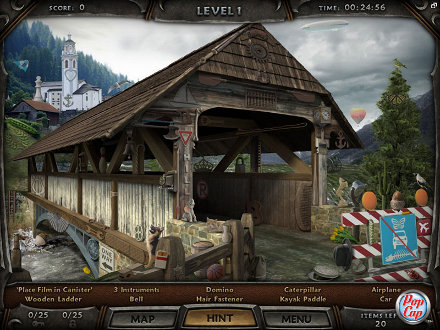 Reminds me of Beetlejuice for some reason...

Less would have been more.
It’s fair to say that Escape Whisper Valley certainly isn’t one of the better games in the Popcap library. Like with most puzzle games that Popcap put out, you simply can’t argue with the production values; the core mechanic works flawlessly, it looks and sounds nice, but it lacks clear direction. In this particular case, the pointless addition of mini-games simply stand to make the main mode very lopsided and it really detracts from the game’s real strengths. My advice is to give it a go, and if you decide to plump for it, aim to unlock the additional modes as soon as humanly possible.