Review: Fate of the World

As part of writing for games, you will always receive shovelware to review. Unfortunately most of them come from the educational or kids lines, where the games don’t receive the money or attention they deserve. Luckily one educational game that has received the time and money to make it a decent game is Fate of the World, the latest game from the team behind BBC 1’s Climate Challenge.

Only you can save the world!

The setup is pretty simple. You play as a multi-national governing body, set to help out the world by offering aid and setting political agendas for local governments. You need to keep their support and funding as the years go by while you also attempt to minimise the environmental changes. Each of the seven different scenarios require different things of you from raising the world’s HDI (human development index) to even playing the opposite role and sending the world to a fiery grave by raising the world temperature to a toast 6 degrees above pre-industrial. 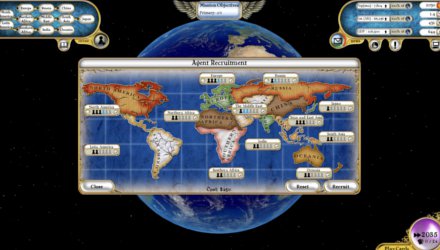 Recruit your agents to help spread your influence.

The mechanics of the future
So how does all this work? Well the game takes place over a series of turns, each representing five years. To make a change in an area, the corporation has to deploy agents, each of which costs money. Each turn, an agent can use a card which represents one of several policy changes that can be enacted to change the world. As you tweak the world’s policies, they can change metrics such as population growth or literacy rate, but they also effect what the world thinks of your organisation. Neglect a region or make the wrong choices and they may cut you off, losing you a big chunk of funding and often causing you to fail a mission. Playing the right card in the right place at the right time is vital.

So is knowing what the heck each card does in a certain situation. The game is designed to be educational, but most of the learning has to be done in encyclopaedia included in-game. Unfortunately the tutorial is a little lacking (it’s the first campaign, focusing on Africa) so I recommend you read up before playing.

A vision of the future
Fate of the World is far from the best looking game on PC but it does have a certain style to it. The artwork is all really good in spite of the technology not being the best, but it presents itself with an easily readable interface that makes playing the game pretty simple. Most of the game’s events are relayed in either static artwork or talking heads, so expect to read quite a bit of text. 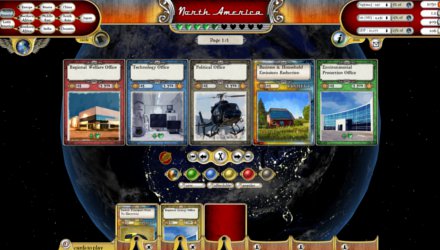 Play your cards right and we may not all be burnt to a crisp.

World music
The sound design is minimal to say the least. There is a little background music and that’s about it. It does the job and it doesn’t risk the bad voice acting that normally characterises this genre. However, the background music is really suitable for the game, giving an air of the far-reaching changes you have to make every turn and the various cultures you must preserve as you carry on.

To the future!
Overall, I really enjoyed playing through the challenges in Fate of the World. It makes learning about the possible events of the next few years interesting and actually enjoyable. Being told to save the world is something gamers are always told, this is one time where it’s not just about killing the bad guy. I heartily recommend it.