It would have been hard to imagine many people saying this a couple of years ago, but you have to give EA Sports credit for the work they’ve done since the release of FIFA 08. The general perception of them was a poor one with most football fans seeing them as the big bad corporation churning out fully licensed phone-ins as they gleefully raked it in. A massive overhaul and gradual improvements in subsequent iterations has seen FIFA deservedly place itself at the top of the league, even overtaking PES which was widely regarded as the football sim for purists.

EA Sports now convey an image of genuinely caring about the quality of the content that they release which is particularly evident in the recently released FIFA 10. That being said however, we are still talking about one of the many arms of Electronic Arts here, who have no qualms about asking for a bit of incentive to release any new content (and what better incentive than cold hard cash?). With that in mind I felt it was healthy to approach the appearance of the Ultimate Team game mode with my cynicism levels readily stocked. The idea of building my own team and showing the rest of the world what they can do is just too sweet of a nut for me to ignore however, so the only way I was going to find out if my £3.99 was cruelly wasted was after I had taken AS Nutrageous to the top of the world.

The mechanic of building up your world beating team doesn’t come in the conventional, with form players, managers, stadia, contracts and performance enhancing drugs (or stat boosts); it comes in the guise of old school card packs. You know the ones I mean; those inviting tin foil packets of ten or so flimsy scraps of paper that you already have firmly attached to your despairingly empty looking Panini book. Presumably EA Sports are aware of just how much money we all vainly pissed away into those sticker books as kids (or I did at least) and wanted to recreate that same feeling of senseless addiction, although I have to say that it does work pretty well. Cards are split into Bronze, Silver and Gold categories with each category having both common and rare varieties, allowing for a range of players with skill reaching the heights of Lionel Messi, right down to the lows of Sol Bamba.

Although you are granted a free set of bronze players to get you started, it’s necessary to build up your collection early on which is where the store comes in. Buying a pack of cards adds a random combination of players and consumables to your collection, which can then be assigned to your active team as you see fit. The feeling of anticipation is always palpable in those few seconds before you find out what you’ve actually bought, although disappointment will often set in as it’s very difficult to acquire some of the more exclusive player cards. The interface is pretty minimal but still slick enough to allow you to switch cards between your collection and active squad without too much fuss.

My main point of contention with the Store system however, is how accessible EA Sports have made the option to spend MS Points or cold cash on cards. Ultimate Team has an internal currency system which allows you to build up coins through selling cards to other players or playing games, with the rewards becoming sweeter as your challenges become more difficult. It works well and I found spending my hard earned coins on a new player or card pack to be immensely satisfying. It intensifies the feeling that I’ve actually gradually built a team and earned my new batch of players. However every time that I choose the option to buy a card pack a prompt is displayed reminding me that I could spend my points, or I could just skip all of that bothersome hard work and throw down some notes for a bit of instant success.

The playing field would be considerably levelled if the option to spend MS points was removed, although I suppose that’s a bit of an unrealistic suggestion considering the countless transactions that have probably passed into EA Sports coffers since Ultimate Team’s release. As it stands at the moment a considerable portion of Ultimate Team players have clearly taken the Roman Abramovich route, with my ragtag group of plucky underdogs regularly being drawn against what is essentially the Brazilian national team, led by Alex Ferguson. Then again, it does make it all the more satisfying when I register a win against the lazy sell-outs.

As I gathered a more impressive looking team I found that better transfers could be had in the trading menu, which provides an auction system for you to buy individual cards as well as offload your old ones. It works in a similar fashion to pretty much every online auction in existence but certainly isn’t any worse of for it. It’s a perfectly functional system that allows players to be a bit more specific with the cards that they add to their roster. I also like that any bids made on cards within the last few seconds of the auction will result in an extra fifteen seconds being added to the auction, which should deter all of those speculators waiting until the last second to snatch away that elusive Cristiano Ronaldo card. 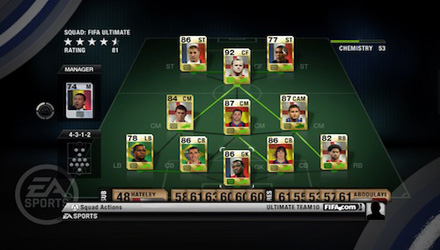 You can have a lineup like this too! After you hand over about thirty notes...

There’s more to Ultimate Team than simply amassing as many Messi cards as you possibly can, although it certainly goes a long way. A significant factor in how your team plays is the chemistry that your players have with each other, which is affected by an impressive number of conditions to give you a little bit more to think about than each player’s skill. Putting players in the right position and picking a formation will yield positive results, but the way that players interact with each other has much more of an impact. Players of the same nationality or who are based at the same club play better when they are positioned next to each other and as a result successful managers will have to juggle their formations depending on where the majority of the squad hails from.

The chemistry system is a necessary one as it forces an extra level of strategy upon the players who want to build up a Galacticos style team, however the effect that poor chemistry has on the pitch can be drastic at times which can cause a lot of hassle for up and coming teams. Passes will be misplaced, cross will float into the keeper’s arms, shots will be sliced and crucially, players seem to insist on taking an extra touch before releasing the ball. It’s a bit too drastic, especially considering the cards that you’re initially provided with barely manage to get your team chemistry near 40%.

Consumable cards are available to subtly convince players to your way of thinking however, such as changing their preferred formation. Training cards can also be used to temporarily boost player stats, fitness, morale or heal injuries. It’s good to see that a player’s stats can only be increased for the next game, as in FIFA 09’s Ultimate Team it was possible to indefinitely improve every aspect of a player’s game until even Kirk Broadfoot was capable of scoring from the half way line.

After assembling my team of stars it was time to throw them into the deep end with a couple of games. Single standalone games are an option but the real excitement comes through the Tournaments, which are implemented with a surprising level of depth. Tournaments are split into Single Player and Online categories with your team being allowed to enter one of each at any particular time. To keep things interesting each tournament has a specific set of entry requirements, which range from only having bronze players in your team to having no more than two players of the same nationality in the squad. The combinations of different criteria result in prospective managers having to think about what kind of players they want to buy and means that amassing a squad of gold star internationalists won’t always mean success across the board. The restrictions on tournaments could have made switching the different players between squads awkward, but a simple mechanic that allows you to save formations and specific squads makes it much easier to flick between them prior to your next cup run. EA Sports also appear to be making an effort to keep the community as active as possible through the Feature Tournaments, which are limited edition competitions with their own unique pre-conditions.

As long as this is regularly updated then I can’t see any reason why the lifespan of Ultimate Team can’t extend right up until the release of FIFA 11. For gamers like myself who love the idea of taking a team that was crafted with their own hand up against other players, FIFA 10’s Ultimate Team is a relatively safe purchase. Even if that’s not your bag however don’t be put off straight away, as Ultimate Team provides a surprisingly in-depth new game mode for a very reasonable price. At £3.99, Ultimate Team actually sits at the top end of the value for money spectrum, which is especially shocking considering its source. Then again, how much money you’ll be tempted into blowing in the aid of actually winning a few games, I wouldn’t be surprised if EA Sports haven’t already made a pretty tidy return on their investment!