Despite half of the developed world claiming to have no religion, and religion itself slowly being purged from every aspect of daily life to be replaced by realism and science, we just love to play God. From the careful nurturing of Civilization to the all-powerful nature of Black & White, ‘God games’, as they’ve come to be known, have dominated PC top-ten lists since time began.

They haven’t done so well on consoles, however, most likely due to the difference in gamer preference and the notable absence of a mouse pointer. From Dust, an XBLA release by Ubisoft’s sunny, south-of-France studio Ubisoft Montpellier, is set to change all that. With a simple, controller-based system and a shit-ton of hype preceding it, can it really be the one to break the mould? I think not, and here’s why…

The plot hole
This is usually where I’d start harping on about the epic (or not so epic) storyline, but frankly there’s little to say. You play a sort of smoke-snake, tasked with nurturing a tribal civilisation from a tiny group into a massive race. There’s some nonsensical bullshit thrown in during cut-scenes that, I suppose, to the more Impressionist thinkers out there could actually mean a great deal. To me, however, it means absolutely nothing. It reeks of ‘written for effect’, and engages you about as much as paint drying.

It’s also difficult to honestly give a shit about both your ‘character’ and those you protect. After five minutes of gameplay I rapidly began to hate my little tribesmen. They make annoying noises all the time, they are thick as two short planks and they never do what I ask them to. Why am I protecting these idiots? There are animals and plants and all sorts here; why am I tasked with leading these ignoramuses to progress? My motivations are never outlined or explained, and as such the game feels like a curse. I am a snake made entirely of greenhouse gasses, and I am forever bound to aid these moronic little people in staying alive and building a civilisation for no apparent reason.

Now if the actual method of doing this was enjoyable maybe I could overlook the gaping hole marked ‘Plot’. Unfortunately, that’s just not the case. 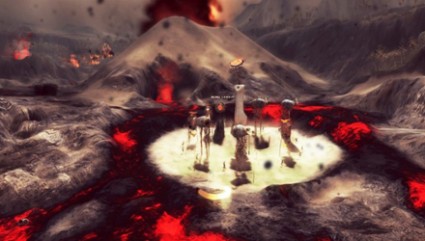 They realised too late that the volcano was in fact not a new form of entertainment...

Take a mile and it gives you an inch…
The first thing that strikes me is the lack of fine control. You can guide your snake about with the stick as you would expect, but the camera is so bad you can hardly ever see where you’re going. Rather than offering a fully manoeuvrable 3D camera, From Dust settles for a 360 degree view and a couple of angle options, both of which are terrible.

The first is so low that trees and hills get in your view constantly, and seeing where you’re heading is impossible. The second is so high that all you can see is the ten feet around you, and yes, it’s impossible to see where you’re heading. The only vague solution is to activate the zoomed out camera, which gives you a wider view of the whole area but makes your snake so small it’s impossible to accurately position it.

Once you’ve wrestled with the camera there’s the issue of the main game mechanic being useless. To win in From Dust you have to guide your little blokes to various locations, so they can complete tasks. But it’s not as simple as just telling them to go there; much of the time there will be water, lava or other obstacles in the way. Your job is to use your God-powers to rectify that. You can pick up water or sand with one trigger, and drop it with the other to clear lakes or make bridges. Simple, right? Wrong!

The problem is that it just doesn’t work properly. I pick up a huge amount of sand, forming a giant ball of swirling dirt. I then drop it on the ground to make a hill. Not only does it seem to drop less than half of what I picked up, it all sinks down too. So my huge ball turns into a tiny mound. This may be correct but that’s beside the point; it’s fucking infuriating. I have to clear an entire desert to bridge a gap no wider than my house. Sand dams wear away over time, but I never seem to get enough time to make the build worthwhile. I spend ages building up sand to stop the water, yet by the time my bloke gets there it’s broken, or the water has found another route.

When lava is brought into the mix it gets worse. Dropping lava cools it to create rock, but the same sinking issue applies; a massive ball of lava makes a tiny rock. When building up some rock defence or topping off a mountain range is a key objective, it’s frustrating to have to lay so much lava for such little result.

Worse still are the natural hazards. After a brief tutorial, you have eight minutes to get a bloke to a shrine to gain the power of water repelling, before a giant tsunami wipes the entire village out. Given that you’ve barely got to grips with the controls or the pick-up-and-drop system, it’s a nigh on impossible task. You send him over, see his route and realise you have to make a bridge. So you spend ages building a bridge, and finally he walks over. If there is but one inch of water on the bridge, he stops and cries. When he gets the ability, he has to take it back to the village and teach it to everyone, so you have to get him back. Only your bridge is now gone, and he wants to go a different way. More than likely the tsunami will hit during your second bridge-building session and it’s back to the start… after watching the entire level intro cut-scene again. 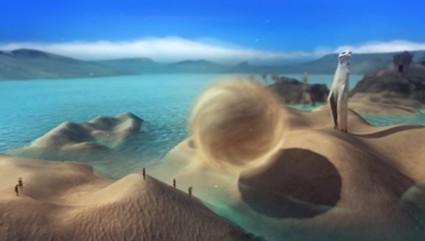 It's hard to resist the urge to just bury the little fuckers and be done with it...

It’s infuriating, tiring and unnecessarily difficult. Every single element of the gameplay has a flaw, or seems to be designed in such a way as to purposely enrage you. The biggest downfall overall? The lack of story and characterisation makes it hard to really care about your people, and the urge to just let them die is much too great.

Oooohhh, doesn’t it look pretty?
I suppose From Dust’s one saving grace is that it looks nice. The physics are pretty, especially the water, and the rolling hills and jagged mountains of the various island levels are pleasing to the eye. If you ever get a spare second between saving tribesmen from imminent natural disasters, it’s quite nice to just snake around looking at the scenery. It’s a shame that good looks don’t make a good game.

Not everything is pretty though. I gather the tribesmen are supposed to represent the first human tribe, similar to Mayan or even possibly Mesopotamian peoples. Yet they have no character; they are masked, dark-skinned copies of each other that either wander about like zombies, or flail around like crazy baboons. They are the bog-standard ancient tribe, with seemingly no thought put into their creation at all.

The animals, however, are a pleasant surprise. They come in various original shapes and sizes, and are more reminiscent of Pokémon than real-life creatures. Each looks unique and interesting, and has its own habits and life cycle.

The grunt brigade
We’re back to the bad again. Aside from the dismal soundtrack, which seems to be composed mainly of whale-song and (sigh) tribal drums, the rest of the audio is bland. Most things sound as they should, but nothing really stands out at all.

The tribesmen grunt, squeal and generally attempt to speak, but consistently fail. They sound like big babies, generally making a fuss and pointing at what’s wrong. I get that it’s set before spoken language (at least as we understand it today) and there isn’t much Ubi Montpellier could have done about it, but this doesn’t change the fact that it’s consistently irritating and entirely pointless.

That last sentence pretty much sums it up folks…
Blustering onto XBLA, enveloped in a heady whirlwind of hype, From Dust epically fails to deliver on almost every conceivable level. The lack of plot, coupled with the broken mechanics and boring premise, make for a gruelling and stressful experience. Sure it looks nice, but so does a mushroom cloud. A game is supposed to be enjoyed; we are supposed to be taken on a journey, or be allowed to live out our fantasies.

From Dust offers neither of those things, and is about as much fun as going to the Job Centre: it’s noisy. You have to wait for ages to get anything done. It’s impersonal, and leaves you feeling cold afterwards. Nothing works as it should, the whole experience feels generally pointless, and a massive waste of time.