The paint option features another rather perplexing choice. Instead of allowing the player to freely chose the color in a palette swatch, the only colors available will be the ones he collected during his career, and each of those paint “chips” will be usable only once, forcing the player to find another one before he can use it on another car. While this adds a little to the “collectible” value of the game, allowing people to go online with their cars painted in “rare” colors as bragging rights, it doubtlessly detracts from the customization freedom, and the results are honestly hard to defend. It’s also to be noted that there’s effectively no way to preview how a color will look on a car without actually using up the “chip”, reducing the flexibility of the painting function even further. It’s indeed possible to quit the game after painting the car and before saving if the result isn’t satisfactory, somehow working around this limitation, but it’s indeed a quite awkward workaround, and by no means a solution to what seems a rather odd design oversight. The last option included in the GT Auto shop is the racing modification available to some of the cars. Activating this rather costly option will completely overhaul a car turning it into a custom model prepared for racing, applying both performance and visual changes.

Some complained about the fact that this option is available only on seventeen vehicles between all the cars in the game. While the number seems indeed quite low at first sight, there’s one fact to be considered. Every car, after being race-prepped, is a completely different car, with new textures, new 3D model (both for the exterior and the interior) and new physical model. So every race-modified car available is effectively one additional car over the game’s total, making it a maybe small, but definitely welcome extra. Obviously I would have loved to see more cars eligible for the race modifications, but considering the amount of work necessary to make a complete new model for each, I can’t really complain. 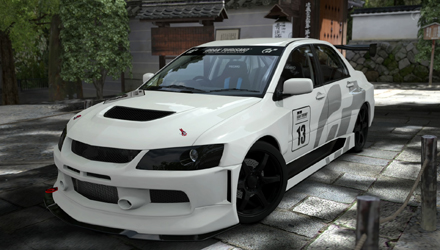 Another option available in GT Life is the photo travel mode, that offers twelve (some are available from the start, some need to be unlocked) real world locations ranging from the classic Kyoto to the small German city of Ahrweiler (where the Nurburgring is located) to act as three dimensional backdrops for the game’s stunning photo mode. Here the player is given free-reign to snap pictures of his beloved (and pimped) rides from every angle and with a visual fidelity that really has no equal in the gaming field. Every snapshot taken in this mode will easily rival a real life picture, and will challenge the most keen-eyed observer into deciding if he’s looking at a game screenshot or at a picture of a real sports car.

The final GT Life option is the mandatory practice mode that allows the player to take any car he owns for a spin on all the tracks he unlocked. While the mode is rather self-explanatory, it hides one of the best “hidden” features of the game, a full suit of advanced telemetry tools that has basically no equal in the racing sim market. The most hardcore hotlappers will love this tool, and even less experienced players will find it very useful to improve their times.

Gran Turismo 5 features twenty-six different locations, split in seventy-one different tracks and variations, providing a nice (while not exceptional) variation in environments and racing conditions. As in previous chapters of the series, some of the tracks are fictional, some are semi-fictional (for instance the Tokyo R246, that is based on an actual area of Tokyo, but the track itself doesn’t exist in the real world), and some are real racing tracks, like the aforementioned Nurburgring or the Monza circuit. The variety is quite good, and while the fictional tracks provide ideal racing conditions for a game, the real world ones are reproduced in maniacal detail, at least from what my experience can testify. Living near the Monza circuit, I had the chance to drive on it a number of times, and the experience in Gran Turismo 5 is impressively similar, not to say actually identical.

The package is made even more varied by the addition of the course editor, a feature that allows the player to set a number of parameters to create a customized racing track. While decidedly not as full-featured and powerful as the track creator included in games that revolve around it, like for instance ModNation Racers, it’s still a nice addition, that definitely helps in keeping the game fresh over time.

The variety of vehicles available in the game is downright great, and definitely unrivaled in the genre. We have cars from every corner of the world (even if there’s a bit of a dominance of Japanese cars, which is nothing to be surprised of, considering that the game is developed in Japany), and representing most categories of Motorsports. We have small family cars, sport cars, exotics, supercars, classic cars, muscle cars, hybrids, almost every kind of race cars (from Nascar to Super GT and F1), karts and rally cars. We’re even treated to some rather exotic historical jewels like the old classic SambaBus and the Kubelwagen. Unfortunately not all that lovely automotive wealth comes with the same detail, and only 20% of the 1031 included cars are defined “premium”, featuring the maximum detail and a cockpit view. We’ll talk more about that later, while discussing graphics. 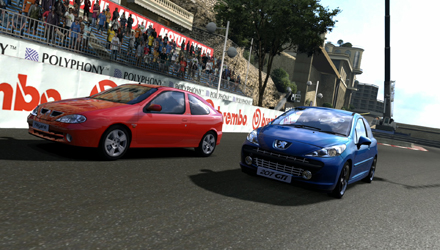 A standard car and a premium one side by side.

As you can see, the features of the game are extremely rich, providing what’s probably the most complete and varied package of simulated racing goodness in the history of gaming. We can’t really judge a simulator, though, without considering its most important feature; physics and handling. That’s why to discover the true value of Gran Turismo 5 we have to pop the bonnet and give a look at the engine that makes everything go round.

As I said before, this is the first time Polyphony Digital has the chance to work on a console that features enough computational power to run a full-fledged simulator, but were they up to the challenge? The short answer is: Yes, they have been.

First of all, we have to consider a rather important premise; it’s very difficult to really enjoy any racing simulator to its fullest potential with a normal controller. The weak  force feedback provided by the dual shock 3, the complete absence of steering force feedback and the smaller input ranges for braking and accelerating mean that you won’t be able to get even near to “feeling” the car, removing a lot from the experience. Not only basic driving maneuvers like throttle feathering will be nearly impossible, but the amount of vital information you’ll receive will be radically lowered.

To give an example, when a real car is about to lose grip and stability, it sends signals through the steering wheel to the driver, allowing him to avoid actions that would worsen the situation and prompting him to take possible countermeasures. For instance, there are situations where the wheel will become much heavier, telling the driver “ease-up, or you’ll lose control”. With a wheel all that information will be at your fingertips, with a controller, it’ll simply be lost. You won’t “feel” that the steering is stiff, you’ll very possibly overcompensate, and you’ll send your car into an irrecoverable spin.

That’s why, if you want to fully enjoy what I’m going to describe next, I have to advise to get a steering wheel. There’s no need for an extremely fancy/costly one like a logitech G25/G27 or a Fanatec. Even just a Logitech Driving Force GT or a Thrustmaster F430 are more than enough if, being an all-round gamer like me, you cannot justify spending 3-400 dollars/euros on a controller that will work only on a few games. Personally, I used a Logitech Driving Force GT for this review, and I can definitely confirm that, considering the price and the features, it’s one of the best “bang for your buck” options, and will improve your experience tenfold from a controller. Playing with a controller is still enjoyable, don’t get me wrong, but I can’t help defining it a lessened experience in comparison. Having gotten that premise out-of-the-way, let’s get more in detail on how cars handle in Gran Turismo 5.

From the first few  moments you put your hands on the wheel and your feet on the pedals, you’ll easily notice that GT5’s physics are a keeper. Not only cars with different drivetrains behave exactly as their real life counterparts (it seems basic, but most if not all of the prominent competitors on consoles don’t even get near to getting this right on all cars), but every single car in the game has its unique driving personality, little physical details and idiosyncrasies that indicate GT5 as a pure-bred simulator. While quite obviously I drove in real life just a small portion of the thousand rides included in the game, I can say that those that I did try are absolutely spot-on, from balance to small details like those pesky dead-zones in the shifting of older cars. The level of simulative detail is, to say the least, impressive. 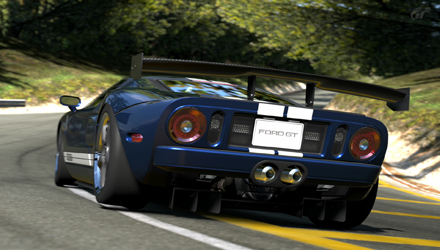 Other areas in which the physics engine excels quite visibly are braking, weight transfer and suspensions, that determine a level of  interaction between the asphalt and the wheels that has no close rival on consoles, creating a driving “feeling” that gives an impressive sensation of control (or lack of thereof in case of errors). I don’t think I’m overstating by saying that Gran Turismo 5 features the most solid and powerful physics and handling engine on consoles, creating a simulative experience that gets quite close to the one offered in the most advanced PC simulators. While it doesn’t overtake them due to the superior power of the PC platform, it gets near enough to be considered quite the breakthrough.