Weather effects are just as incredible, with rain and snow looking great both from inside and outside  the cars. The accumulation of rain on your windshield as seen from the cockpit view looks amazing, and includes lovely details like drops shaking and falling as you happen to catch a bump in the road. Add to them the aforementioned lighting effects and the transition between day and night, and some of the combinations present in the game (for instance racing at night with rain in the artificially illuminated Special Stage route 7) can only be defined absolutely spectacular.

It’s impossible to describe GT5’s graphics without mentioning some little details that really show the amount of love and passion that has been poured into this game by the developers. Many will chalk them as marginal, but I always firmly believed that it’s what you don’t see at first sight that shows a lot of the quality of a game. Just to bring a few examples, the grass on the sides of the track will actually bend dynamically when hit by the turbulence created by a car speeding nearby. Rally cars will actually carry the logo of the rally competition that they’re taking part in (like in real racing), changing automatically as you move to another rally, and many cars actually feature dynamic headlights patterns when flashed, like their real counterparts. 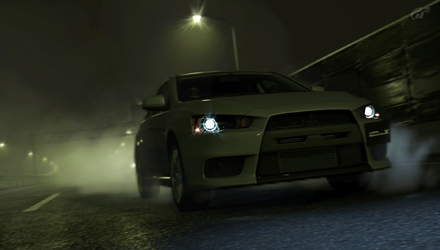 Last but not least, Gran Turismo 5 features the best sensation of speed I have ever seen in a racing simulator without the addition of artificial effects like motion blur and similar. Of course to fully enjoy it it’s necessary to drive from the cockpit view, but there are quite a few places in the game where pushing a powerful car to the limit while approaching a corner gave me that familiar tight sensation to the stomach, tempting me to chicken out and brake early. That’s, in my career as a racing simmer, quite unprecedented, as I previously experienced it only while driving in real life. It is definitely a testament to just how immersive Gran Turismo 5 can be.

If the pictures included in this article aren’t enough for you, and you want to see more and bigger, you can check my massive flickr gallery.

From roaring to whining in a tight package

Gran Turismo 5 features a wide variety of cars, some of which no longer, or don’t even have a functional engine anymore. So it’s a little unrealistic to demand all the cars to have perfectly real engine sounds. That said, most of them have, at least to my experience, realistic engine roars, at least in their stock incarnation.

With this kind of game, though, the real problem for the developer comes from tuned engines and after-market mufflers. They can’t go around souping-up the engine of every car in the game in real life to record how it sounds, so they need to settle for a bit of approximation. Unfortunately Polyphony approximated a tad too much, with the result that the difference between engines tends to be flattened gradually the more they are elaborated and the pitch of the sound raises, sometimes turning into a whine that while not necessarily unrealistic, it tends to become a bit annoying.

Other sounds are definitely more pleasant to hear, at least realism-wise. The squealing of tires and the kickstart of the engines, for instance, are definitely top-notch. On the other hand, the sound of collisions shows a fairly weird choice. When heard from an outside view, it will sound metallic, while when heard from the inside of the cockpit, it will be more akin to the sound of plastic or carbon fiber colliding, even in cars that feature a fully metallic body. 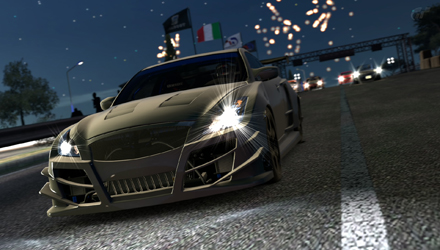 Music is more of a matter of taste, considering that the soundtrack is the usual medley of pop/rock/punk more or less on the same level of what we saw in previous chapters of the series. The variety is relatively good, and fits a wide array of genres and sub-genres. More notable than the choice of tracks itself, is the ability to actually remove one or more disliked tracks from the ones that the game will actually play during the game, and the ability to create personal soundtracks from MP3 files present on our hard disk, effectively allowing everyone to drive to his own favourite music. Personally, for instance, I have a nice collection of songs from the Initial D anime, and have found that their upbeat rhythm actually shaves quite a few tenths of second from my usual times, as it helps me in keeping my driving pace steady.

A possibly marginal, but rather annoying detail is that Sony Europe/America and their marketing offices actually decided to stick their noses where they don’t belong, replacing the classic Gran Turismo track “Moon over the Castle” (present in the Japanese version of the game) in the intro with a rather lackluster song by My Chemical Romance. Again, it’s a marginal detail, but “Moon over the Castle” is a really great and fitting track, not to mention a classic staple of the series, and seeing it go for a completely forgettable and not really fitting piece of punk/emo music is rather sad.

An extensive multiplayer suite, with a few gaps
Gran Turismo 5 is the first of the series to feature online multiplayer, not just featuring online races, but also a full online suite that includes web-based profile and image sharing, personal message boards, fully customizable lounges and leaderboards for seasonal events. The racing lounges include some very nice features, like the ability to just practice driving and drifting until a race gets started, and the full ability to customize the courses and the cars available and their power/weight ratio. The option to include mechanical damage and exclude some driving aids also allows the host to customize the level of challenge quite nicely.

Racing itself is a pleasant experience without many hiccups, provided the presence of a good internet line and that you won’t race against players from the other side of the world (in that case lag could become more noticeable). Connecting with friends is relatively painless thanks to the integration with the PSN friend list (something that’s surprisingly missing from quite a few other PS3 games), that also allows players to send and receive cars, paint chips and museum cards. 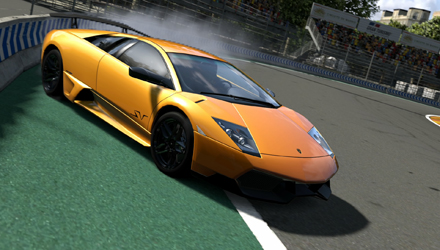 Cutting it close. Don't try this at home!

While the lounges are indeed very nice for established groups of friends, they are a bit under-featured when someone is looking to actually make new friends, missing the relatively random thrill of an automated matchmaking system. A hopper system on the side of the lounges would solve the problem nicely (I would say, though, that the lounges are way better than having just an hopper system, but nothing prevents polyphony from implementing both in the future). Also, extending the online leaderboards beyond the seasonal events would improve the competition, allowing people to compare their times with their friends and with the best on every available course, and not only on the ones chosen for the seasonal events.

The “Real Driving Simulator” is here to stay
Having played Gran Turismo 5 rather extensively, I can easily see that it’s not a “perfect” game. That said, it’s definitely a great game, and most definitely the best racing simulator available on consoles. While it doesn’t go as far as overtaking some of the most powerful physics engines featured by the best PC simulators (but it gets quite near to them), it makes up for it with an astonishing visual fidelity and with an unparalleled richness and variety of content.

There are a few flaws here and there, but Polyphony Digital have already demonstrated that they plan to keep building over the game, not only solving problems, but also adding new features and content, getting nearer and nearer to Yamauchi’s idea of a “driving MMORPG” always changing and evolving the experience.

In a market in which developers tend to forget too easily and too quickly the problems of their games, focused as they are on generating more revenue with paid-for DLCs, this attitude and continued support can only be defined as refreshing and commendable, even more so on a game that can easily be classified as the best of its genre on consoles, by a long shot.