In computer gaming days of yore, point-and-click adventure games were all the rage. I have fond memories of playing the Monkey Island series on my Amiga, along with others like Indiana Jones and even Zak McKracken and the Alien Mindbenders. This eclectic genre of gaming has lived on, albeit nowadays in more of an underground, cult form. I haven’t dabbled in any point-and-clicks for ages, so was excited at the prospect of getting my hands on the latest title by WizarBox, Gray Matter. I’m feeling generous, so I’ll go along with its Americanised spelling and try not to complain too much.

One reason why Gray Matter is particularly promising is that the development team included Jane Jensen, the person responsible for the popular point-and-click Gabriel Knight series from the 90s. With this experience and heritage under its belt, will Gray Matter bring the genre refreshingly up to date, or will it be too stuck in the past?

A tale where not everything is black and white

Arguably a point-and-click adventure is nothing without an interesting storyline, and thankfully Gray Matter delivers this in abundance. Taking the role of quirky alternative girl Sam, your motorbike breaks down, forcing you to seek refuge at the creepy house of Dread Hill, owned by the mysterious Dr Styles. So far, so generic. Thankfully however, the plot develops in a much more fascinating way than the intro could lead you to believe. Sam ends up working as Dr. Styles’ assistant, gathering subjects from the nearby Oxford colleges for his experiments, and uncovering mysterious paranormal mysteries that beg to be solved. 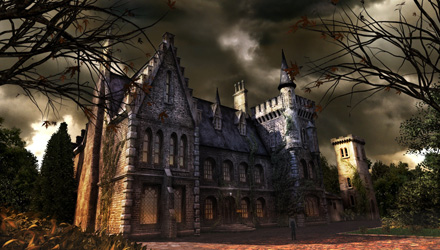 The storyline is often communicated through animated cut-scenes, which do the job but are a bit basic, with characters and objects just literally sliding around rather than being properly animated, akin to an amateur Flash movie. Okay, I’ve probably made them sound worse than they actually are, but the bottom line is that they can sometimes look a little clumsy and awkward, like trying to create a romantic lovemaking scene with hand puppets.

This certainly doesn’t take away from the compelling narrative that unfolds, however. You discover that Dr. Styles tragically lost the love of his life several years ago, and his life has been disrupted and solitary ever since, always living in the past and refusing to move on. When Sam first arrives at the house you have the chance to explore, and listen to her comment on all of the bizarre furnishings and knickknacks to be found. Several chapters in though, and you take control of Dr. Styles himself, who then guides you through the house from a much more personal perspective. His recollections of how beautiful his deceased wife Laura looked in the dress that still hangs in his closet, and how she brushed her hair in her vanity mirror every day are resonant with emotion and really tug at the heart-strings.

Clicking finger at the ready…
Gray Matter gameplay-wise is a classic, old-school point-and-click adventure game through and through. Little has changed of the basic mechanics through the years, although there are just a few concessions to the modern audience, like detailed progress meters displaying how far you are from solving a mission, and the map highlighting locations of importance and greying (or should I say graying) out places that you can’t do anything more in for now, saving you from pointlessly wandering around in irrelevant areas like a muppet.

This game certainly still requires patience, however, with puzzles ranging from insultingly easy to exasperatingly difficult. Some of the solutions are staring you right in the face, but others are truly a little obscure and need to be solved with brute force trial-and-error… or a quick Alt-Tab out into Google… 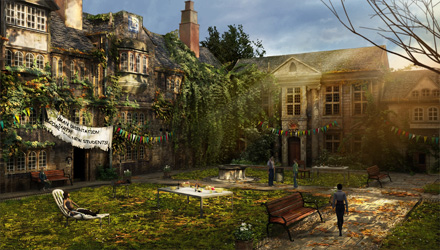 This game is no walk in the par... oh wait

The puzzles are usually well-crafted and rewarding on the whole, at least. An interesting twist is that Sam is an amateur magician, and beguiling others into giving you what you want often involves performing a magic trick. These are listed in a pocket-book that she carries around, and you will need to pick the right trick for the situation, and plan out all of the steps in advance. It’s a shame that you often feel detached because of this pre-planned method, with no real direct interaction. Games of this genre by nature rarely involve true real-time interaction though, usually letting you take as much time as you need to solve a puzzle… or do they?

Heavy Rain is essentially a point and click adventure game that has been properly updated to the 21st century, and features a lot of ‘Simon-Says’ style button mashing that directly affects the outcome depending on your performance, even possibly killing off your character. Whichever style you prefer is down to personal preference, although I feel both are equally as valid, even though Gray Matter’s gameplay is essentially about twenty years old.

There are some other flaws in the design, however. For instance, Sam at times has the amazing foresight to know exactly which magic props she needs to buy from the local magic shop ready to solve puzzles that she hasn’t even encountered yet. Spooky future-predicting magic, or just sloppy game construction? 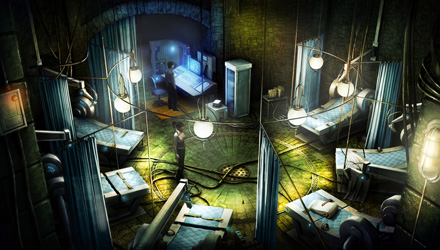 Now that I think about it, I could do with a nap... and a brain dissection

The interface and controls at times are also terribly clunky, with characters sometimes getting confused and walking around in circles when you’re trying to tell them where to go, and the magic book mystifyingly taking a frustrating amount of time to navigate. I’m sure my Amiga could have handled the page turns faster. Some trigger points are also a bit too well hidden in the levels, and can be awkwardly all grouped too close together, leading to you end up pressing the wrong object.

It’s all too easy to forgive the majority of Gray Matter’s shortcomings however, as by and large it’s a captivating game drenched in atmosphere, and driven on by an engaging story. Solving its many puzzles will make you feel like a detective genius, and there’s always the option of a cheeky peek at a walkthrough if you get hopelessly stuck; life is too short, after all.

Brains AND beauty?
The visuals of Gray Matter are a mixed bag, as the cut-scenes are massively underwhelming, and character models are adequate, though not overly impressive considering the amount of potential graphics processing power that could be available, thanks to the majority of the game being rendered in 2D. Its saving grace are that these 2D backdrops are at least beautifully drawn, with a real painterly feel and gorgeous little details embellished on to avoid them looking too static, like puffs of smoke from chimneys. 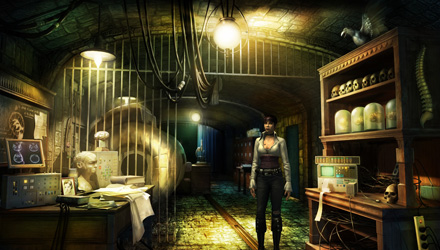 The presentation overall is a little lacking, though, with in-game menus and interfaces like the magic book, trick setup menu and computer screens looking a bit naff. This is a lower budget title however, and it can’t be disputed that Gray Matter certainly looks more up-to-date than its ancestors.

Music that Matters
The sound of the game is actually surprisingly well done. First and foremost, the major relief is that the voice acting is pretty competent. Point-and-click adventure games involve a lot of your character talking to you and others, so shoddy voice acting would have made it a nightmare. Some of the lesser characters are perhaps a little more amateurish in performance, but on the whole the voice-overs are fitting to their roles and a joy to listen to.

Furthermore, the music is perhaps an even bigger achievement, with a folk theme tune that ties in with the storyline (think modern folk music, not lutes and pipes), and a score that is very effective at evoking atmosphere throughout the game’s numerous settings.

Puzzled over the verdict? Not at all
Gray Matter has not left me disappointed. In fact, I was pleasantly surprised to find one of the most engaging storylines in a video-game that I have seen in a long time. The gameplay provides some rewarding brain teasers, and the practically faultless audio is the icing on the cake that really helps bring it all together. 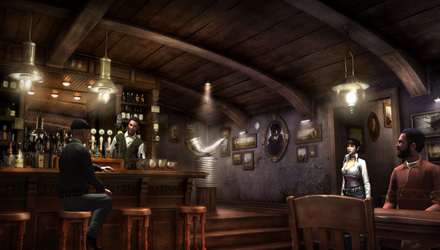 A woman walks into a bar, and asks for a double entendre. So the barman gave her one. *grabs coat*

I know I said that Heavy Rain feels more modern in its gameplay, and it is certainly the more visually attractive of the two, but having played both I have come to the shocking conclusion that I actually enjoyed Gray Matter more. It’s not just a compelling game, but also an enthralling work of fiction. If you don’t have the patience for this genre, then steer clear (although you’re missing out), but for anyone who’s willing to happily get absorbed into a thought-provoking and charming narrative, then point your cursor over to your favourite online retailer, and click the ‘Buy’ button.