Today, the most debatable topic at hand for many gamers is whether or not to consider each game an experience or simply a game. In terms of just being a game, Halo 3: ODST not only falls short of expectations and some standard requirements for modern first person shooters, but it does little justice to the extortionate price it’s been tagged with. As for an experience, ODST will not only immerse you more than Master Chief’s misadventures ever could, it will really make you feel like an Orbital Drop Shock Trooper, if only for the six or so hours it lasts.

We are ODST
In ODST you’ll be set in the boots of the Rookie, the newest member of an elite squadron hand-selected to repel the Covenant attack on New Mombasa. If you’ve read any of the Halo novels, you know full-well what the end result will be, but if you’ve stuck only to the games you’ll find a rather shocking ending to a game which is an innovative step forward in the series. The plot isn’t at all interesting, and the characters are extremely cliché and static, but the cut-scenes are short and progress the story along well enough that they don’t become cumbersome on the gameplay. It works out well in the end.

The Rookie
The most immediate difference you’ll notice in ODST is the difference in capabilities you have from when you’re playing as Master Chief. The Rookie is a regular human. Okay, he may be highly trained, fitted with the best in weapons technology and be amazingly perceptive, but at the end of the day he’s still just a human, unlike the Chief, who is a Spartan. This means you won’t be able to jump as high, toss grenades with as much precision, or take as much damage as in the previous Halo games.

Much like Halo: Combat Evolved, you start with a rechargeable shield which doesn’t last for very long. Once that is depleted, your health bar takes the brunt of it all. The health bar doesn’t recharge itself like Master Chief’s; rather it can be refilled with health packs scattered around the level. It’s hard to guage how close you are to death, though, for most of the time in battle. This is due in large part to the fact that whenever you’re hit even once the entire screen is drenched in a deep red. 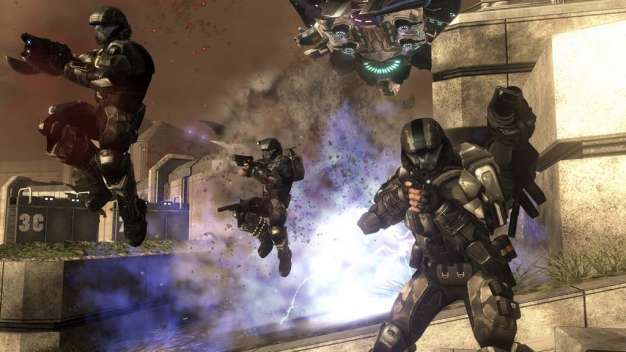 This is a feature that is both overused in shooters in general and overbearing in ODST specifically. Most shooters, even of past generations, would only have a slight bit of red tint to the screen if you’re hit, and the more you’re hit the redder your vision gets. It’s a viable solution to having less HUD necessary to indicate a player’s distance from death’s cold embrace, but I guess Bungie just couldn’t get it right this time around.

I CAN’T SEE!
It was a classy move, what Bungie did. They decided to give ODST a film-noir perspective to go along with the whole detective-like gameplay. To this end, they made the times in the game where you play as the Rookie take place in the dimly-lit New Mombasa streets at night.

To see, you must don your trusty visor, which illuminates any area without the need of a flashlight, and puts outlines on anything you can see. The visor is a very cool addition which only serves to improve the ODST experience and make you really feel like a futuristic soldier behind enemy lines. What wasn’t a classy move by Bungie was the decision to make nearly every other time playing the game take place outside in the daytime.

Because most of the time you’ll be playing under the digital sun, it’s always too bright to use the visor without crying tears of blood. Yet at the same time, the lighting is so poor everywhere that if you don’t use the visor you’ll be squinting so hard your eyes are liable to pop out of your head. This one visual foible puts a dent in nearly every moment of gameplay, which depletes how much fun can really be derived from all the entertaining Halo gameplay.

I’m classy because I listen to jazz
The music in ODST is very fitting for the style. The jazzy style infused with an orchestra is both a joy to hear and very immersive. It’s also a nice change of pace from the usual theme song reused in nearly every Halo game before this one. Sound effects and voice-acting are of the high quality to be expected in any Halo game, so no one will be disappointed there. This one aspect of the game makes up for some of the other issues with the experience at times, but not completely.

Danger: possible t-bagging hazard
The previously mentioned red-drenched screen not only puts a damper on campaign play but comes up in Firefight mode too, a mode which is new to the franchise. Firefight, like Horde and Nazi Zombies before it, puts you and up to three other friends in an arena in which you’ll have to fight off waves upon waves of enemies. The differences between Halo’s Firefight and the similar modes from other games are, for the most part, a detriment.

While the fact that it’s generally just much more difficult than Horde or Nazi is a huge bonus for the hardcore shooter fans, the downside being its lack of online matchmaking doesn’t seem to even out. By lack of online matchmaking I don’t mean you’ll get randomly placed without any reference to your rank. I mean that there is no way to play with anyone online other than through your friends list or an invite. With preceding games already setting a higher standard for modes like Firefight, it’s really hard to say that this is a legitimate reason to consider ODST. 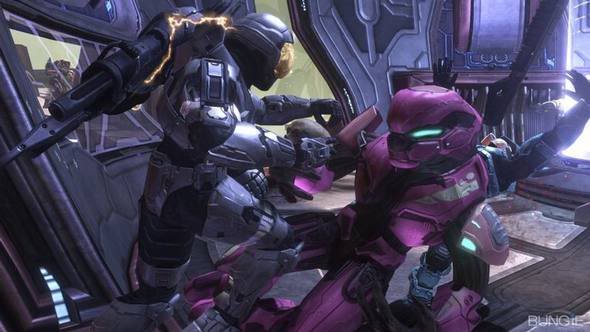 On top of that, the competitive multiplayer offers very little to those who already own Halo 3. ODST comes with Halo 3’s award-winning multiplayer along with every downloadable map ever released and three more which are exclusive to the game. What this means is if you’ve bought every map pack for Halo within months of their launch, you’ve probably paid more than the cost of a retail game just for those. Now the only way you can experience the campaign and Firefight modes of ODST is to buy the maps again.

Effectively, to any customers in this boat, Bungie has donned iron boots and stomped on their toes while chanting “Nananana boo boo!” Thanks so much, Bungie. What a class move. This in mind, I’m sure you’ll understand why I can’t help but refer to ODST as a frankly stupid package. Unless you don’t have Halo 3 or you do and have not purchased any maps, there’s not much of a reason at all to burn the cash on ODST unless you’re a die-hard fan to the end. Researchers believe that most of the most commonly prescribed antibiotics are quite compatible with alcohol. In any case, one or two glasses of wine is not a reason to interrupt the course or think that antibiotics have ceased to act and the treatment should be re-started. Researchers say that mixing alcohol with antibiotics was banned during the Second World War. Then the production of the drug wasn’t mass, and it was used repeatedly- patients collected urine, from which they received new penicillin. Beer drunk by the soldiers increased the volume of urine, and it became harder to process.

The Rookie or the Chief
So if the question is whether or not you should pick up a copy of this game, the answer rests solely on your wallet and your judgement. If you still have money left over that you didn’t spend on the downloadable maps the first time around, ODST is well-worth the experience you’ve been missing out on and a new campaign that’s entirely entertaining. However, if you’ve already burned a hole in your Microsoft points on these maps, there’s nothing on offer here worth the price of a full retail game. As it stands, the best decision you could make in deciding whether or not to get Halo 3: ODST is to try it out first.