Puzzle games were something of a dying breed until the DS brought them back with a bang. The touchscreen interface proved perfect for the genre, with cult hits like Another Code making the best of the system’s capabilities before Brain Training, Hotel Dusk and (especially) Professor Layton took the reigns most recently.

Not to be outdone, Ubisoft have thrown their own new puzzler into the mix. Cue James Noir’s Hollywood Crimes 3D; a puzzle game on 3DS set in 60’s L.A., where a murderer is at large…

James Noir’s Hollywood Crimes places you at the centre of the story. After passing a simple audition, having your photo taken and signing your contract, you’re officially a contestant on Hollywood’s most popular quiz show, ‘The Incredible Puzzle Masters’. After an impressive first round, you are invited for a drink by the host, and you both head to the local watering hole. Halfway through your Martini, your enthralling conversation is interrupted by an old buddy of yours, now an FBI Agent investigating a series of murders that are strongly tied in with the TV show.

It turns out that previous winners are being murdered one-by-one. The FBI require your help in solving the dastardly puzzles left at the scene of the crime, while also ensuring your victory in the TV show. A dangerous balancing act.

Wait a second… L.A.? Hollywood? Murder investigations? Noir?! This sounds a lot like a certain Noire game that Rockstar put out midway through the year… if it sounds like the game is trying to cash in on the success of L.A. Noire, that’s because it probably is, a little. In reality, though, they have very little in common. James Noir’s Hollywood Crimes is an entirely different kettle of fish, as the setting is only there to present a myriad of puzzles in the most fun way it can.

It’s an enjoyable little plot while it lasts, though it’s far from deep, told in a style that’s so camp and kitsch in style that it’s parodying itself at times. It’s just got this vibe; almost an air of one of those TV soaps that’s so irredeemably terrible that everyone involved knows it, so they just have great fun hamming it up and playing up to it. I can certainly imagine the developers having a great deal of fun putting this together, and that fun definitely rubbed off on me. 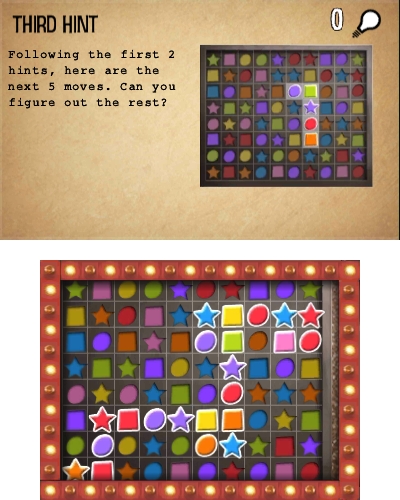 The game show puzzles are bight and colourful...

Click, drag, tilt…
James Noir presents the puzzles to you in two very different ways, and their styles contrast quite spectacularly. The first you’ll experience is in the game show, where your aim is to beat the score of the previous week’s contestant (and your regular opponent). You get to choose four puzzles out of a selection of twelve (you can see their premise before you agree to them), with their points split evenly and based on their difficulty.

Over the course of a round, you’re allowed to use up to five hints, but doing so will mean you get less bonus points on the board as you aim to beat your rival. By completing the puzzles without hints, you’ll earn ‘fan hints’, which can then be used in the murder investigations.

For the most part, they just use the stylus, asking you to draw lines between numbers while entirely filling a grid; slide worms around a maze; solve jigsaw puzzles with a variety of different sub-rules; or play tweaks on many real-life solitaire games. Some might have you writing out an answer or working out maths puzzles; some might be more about spotting patterns. Some of the puzzles make use of the 3DS’ gyroscope, allowing you to slide blocks around a maze. Be warned, though; a lot of these repeat over the game’s six rounds, but they get progressively more challenging as you work your way through.

In-between the rounds of the game show, you’ll see the other side of the game as you get taken to crime-scenes to solve the puzzles and riddles left by the murderer. These, in contrast to the glitzy graphical style of the game show, are told a bit more grimly, but it loses none of that charm in the process. These puzzles tend to be a little more inventive and original too and, especially towards the end, were the most satisfying that the game had to offer.

No matter which portion of the game you’re in, at any time during a puzzle you can open the side menu, activate hints, restart the puzzle, or (my favourite) open a note-pad overlay so that you can jot down notes and work out routes or sums, without it affecting the core puzzle; a nice little feature truly welcome in my eyes.

At any time you can retire to your hotel room, and this is acts as the hub of the game. From here you can continue the story, complete the puzzles that you didn’t choose in the game show sections for additional hint points, and even read the fan letters you’ll earn as you play through the game. Some of these fan letters have puzzles in too, and are totally worth checking out as they offer some further variety to those found in the other areas of the game.

While all of these puzzles are definitely fun and none are inherently broken, what I will say is that I was hoping for some more imaginative use of the 3DS’ tech when it came to the solutions. For example, Another Code, an early title for the original DS had me using my console in ways I couldn’t possibly have imagined, and I think that without that, games like this can’t help but feel a little formulaic in comparison. Some thinking outside the box would have really made James Noir shine, especially when it came to the murder investigations. 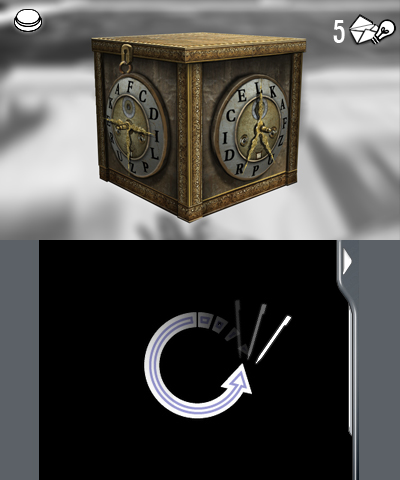 The murder scene puzzles are darker, but infinitely more enjoyable...

Give me a Kitsch…
I mentioned it above, but the game is coated in kitsch, and it’s very classily presented. There’s a very small cast implemented here, but they are all motion captured, with their general, conversational animations all sped up and on repeat while they talk. It looks terrible, but in a way that makes it funny and charming.

You will also get incorporated in to the game in clever ways thanks to the photo you take at the beginning. You’re used in the stylish intro, which has more than a few shades of ‘Catch Me If You Can’ about it. You’ll also catch yourself on newspapers and other parts of the game. It’s really cool to see and it’s implemented flawlessly; a nice bit of thought from the developers.

The use of the 3D is delicately used for the most part, though for some of the puzzles it does bring them to life. It fails to bring anything to the top-down mazes, for example, but anything that requires the rotation of a 3D item really helps it pop out of the screen. It’s not a game that focuses around a 3D experience, but it’s slightly richer because of it.

Pure Noir!
It’s in the audio where you’ll be reminded most of L.A. Noire, where the gameplay is accompanied by the soft, lucid tones of jazz music. It really does fit the era portrayed, as does the voice-acting. Again, much like the rest of the game, it’s purposely cheesy and so bad it’s great; there’s a surprising amount of dialogue on there, too.

A pleasant audible experience that doesn’t grate or annoy. 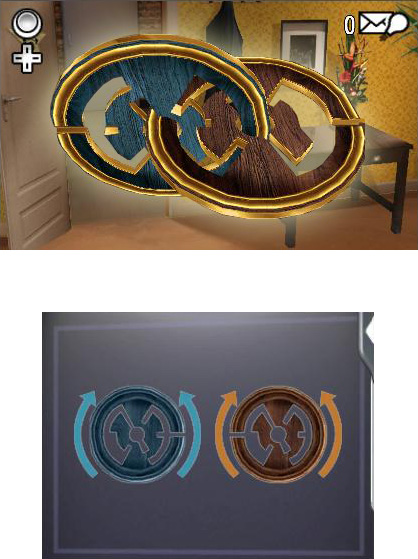 The butler didn’t do it…
James Noir’s Hollywood Crimes could certainly have been better in some respects; the puzzles could have been a little more varied or they could have made more imaginative use of the 3DS’ capabilities (to be honest, I think this genre will ever be ruined for me in this respect thanks to Another Code), but you know what? I really liked this one while it lasted.

If you’re looking for some challenging head-scratchers and don’t mind a side-order of cheese along with them, then you can find far worse puzzle games on the market than this. Just be warned that it’s the campy vibe that helps its lifespan greatly, and if you were looking for a pure, menu-driven puzzler, it probably won’t hold your attention as long.