There are some phrases I’ll never want to say in life, such as ‘well done on winning the league Manchester United’, or ‘that was an informative episode of Eastenders and much better than gaming’. There is a time for firsts however, as this week I muttered another sentence I would never have thought myself saying; ‘my barbarian just reached level 40’. Already I can feel my inner nerd cringing at the sheer thought of that even crossing my mind.

What’s so wrong with that? Well I love RPG’s, but I really hate ones set around the realm of high fantasy. Dungeons & Dragons, Lord of the Rings, Conan? I just listed three things I find a massive turn-off. Why I find (equally dorky) sci-fi games more enjoyable I can’t really say, but it’s a matter of taste. Something else that usually turns me off is hack ‘n slashers. At this point you may be thinking ‘Andy, you hate high fantasy, you hate hack ‘n slash games… what the hell are you doing playing a game that encompasses both the things you dislike you maverick?!’ Namely Neil’s Deals, and the fact I was able to pick it up for less than the price of a games magazine.

There isn’t even a kingdom…
Having never played a KUF title before, in research I became aware that this title was intended to be something of a spin-off from what apparently is usually a Dynasty Warriors style affair. This time developer Blueside has ditched a lot of the strategy that fans of the series enjoyed previously, to concentrate on creating an action RPG-lite. You pick your chosen character that suits how you want to play, and set off slaughtering as many of the enemies that inhabit… erm… wherever the hell you are; it’s never really explained.

Usually around this part of the review we tell you about the story, the setting, the set-up, but that’s pretty difficult to do when the game practically has none of those things to its name. The basic premise is that the Light and Dark forces of the world made a pact to share rule in equal measures. As the Age of Light is about to end, Nibel, the leader would not give up his rule to the dark as was promised. The leader of the dark legion, Encablossa, becomes enraged and is now using the heroes to achieve his goal. Surprisingly other than that, this game has no real storyline, character development or even so much as an explanation as to why you are doing the things you are doing. In some cases depending on your selected character, what story there is doesn’t even start until you are a third of the way through the game.

Press X… a lot
As mentioned above, before you start you pick the character of your choice out of the initial five on offer, each having their own benefits and disadvantages. Regnier for example, is a powerful melee character and can take a whole lot of punishment but is agonisingly slow. Celine (not Dion thankfully) is a quick and nimble focuses on projectile attacks but soaks up more damage than a kitchen roll. Rest assured you’ll find a character that suits your type of play here. Combat is extremely basic; you assign certain weapons to certain buttons and go from there.

Melee attacks, for example, are defaulted to the X button, you can set a projectile attack on A, and the other buttons are used to assign powers and potions too. A SP bar manages the amount of frequency you can perform certain attacks, and can be affected by the weapon or equipment you are using. This simplistic combat system is a blessing and a hindrance in that yes, it’s easy to set cool-looking combos in motion using only one button, but with the amount of enemies you’ll face during your play though the game becomes pretty tedious very quickly, with the repetition really starting to grate at the halfway point.

To try and help vary things up a bit, each playthrough will never see you traversing the same dungeon layout as the maps are randomly generated to a degree. The overall map might differ a lot throughout different campaigns, however each square is a template meaning that you will often see the same locations repeatedly, dressed up slightly differently depending on what region you are in. The character’s individual story quests are dull, and I struggle to see why they are labelled quests at all. All they involve doing is engaging in combat and killing a set amount of enemy types… there is no questing about it in the slightest. The ‘quests’ are gained by speaking to the same character repeatedly in the ‘dream world’, which is accessed by sleeping areas where the idols are located (with whom you can trade and synthesise your armoury), and this is where nearly the entire story happens.

Speaking of enemies, there are a reasonable amount of different foes to fight, however a lot of them are slight deviations on ones you’ll see early on, with fire, ice, wood, and flesh variations. A special mention must go to the guy who came up with the name ‘Explosive Flesh Spear’. There are some types restricted to certain areas, such as the magma men who might seem somewhat out of place in a forest. There are six boss fights, one for each region and are fairly enjoyable, with each having its own weaknesses to exploit. My advice is to learn how to synthesise your weapons properly otherwise you may have issues with bosses after the half-way point, leading to much frustration and subsequent grinding. Elsewhere it’s your typical loot-drop RPG adventure, with a heavy focus on upgrading your kit and customising your character the way you want him to fight. 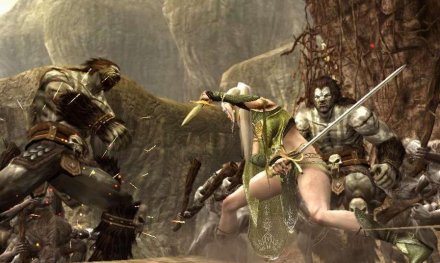 Not as exciting as it looks.

Buns of steel
One of Circle of Dooms strongest points is definitely visually, all character models are masterfully detailed, and when you make changes to equipment it is reflected and to great effect. The way the varying types of armour and outfits move are impressive but are prone to clipping issues where capes are involved (except for Regnier early on as he spends much of the time half naked, so if gratuitous amounts of ‘man-ass’ are your thing then you won’t be disappointed). When you lay into enemies satisfying spurts of blood jet out (providing you switch blood on beforehand) which prolongs the interest in the combat a little. There were some technical issues I found with the camera getting stuck in confined spaces which made it a pain to manoeuvre out of and seemed to cause some frame rate problems in the process. This was especially apparent in the ‘hall of arrogance’ levels.

Swish, swish, swish, swish
Sound effects are generally sub-par, with most annoying part being the footsteps almost sort of drumming out some monotonous beat. Projectile effects for weapons such as the cannon sound dull and flat, while sword play sounds great with a sickening thud as your weapon hits those who stand in your way. The score was something I really enjoyed, ranging from the gentle twinkles of the forest area, the hard rock of the desolated castle area, all the way to the dirty synth that accompanies the lava populated areas. This gives each environment its own distinct sound, and does get you hyped up to fight, despite the combat being lacklustre. There are limited vocal performances in the game but the small amount there are have a semi-decent quality, except for Encablossa who sounds stuck somewhere between a Patrick Stewart and Emperor Palpatine impression.

Take the tedium online!
KUF does include a pretty competent online co-op component, with four players being able to jump in at once to power through the campaign. A nice feature being that you are able to pick up from whatever progress one of you has made on the single player mode. I’ll be honest; I didn’t spend much time tinkering online with this mainly due to the age of the game at the time of review. Instead I quickly jumped in simply to see how stable it was and to its credit it ran pretty smoothly. There was talk of Blueside not even wanting to incorporate a single player mode at all, and this is evident when playing on your own, as the loot-drop system really comes into its own when working in a party, however it can’t really save the gameplay from being dull.

Avoid it, try it or buy it?
I find myself at somewhat of a cross-roads here, as had I purchased this at full price I would have instantly said avoid, but at under a fiver I found it at least worth a look and a play. The game actually starts off as mindless fun, however the more you progress the more you realise just how little there is to experience. Looking at it objectively and ignoring the current price I will have to go along with my initial stance of avoid, but should any hardcore fans of hack ‘n slash games or loot-drop RPG fanatics be able to convince some like-minded buddies to invest as well, it might still be worth a look, otherwise, give it a miss.