Mystery P.I. is a point and click puzzle game created by Spintop Games and published on Pop Cap games for what I believed to be quite a hefty price tag for what it actually is. My initial thoughts before playing the game, purely based upon what I had read about it, was that it would be similar to the Broken Sword series, or possibly Sam & Max. Unfortunately, I was proved very wrong.

I think it was Colonel Mustard with the candle stick in the kitchen…
Stolen in San Francisco is the sixth instalment in the Mystery P.I. game series. The story is simple; you are the world famous Mystery P.I. hired to look into the mystery of stolen gold in San Francisco. Up against the clock, you must find as many clues as you can to wrap up the mystery and return the gold to its rightful owner before time runs out on you.

I’m getting a serious sense of Déjà Vu
There are 25 different locations to explore for clues in Mystery P.I. but I use the word explore in the loosest of contexts. Each level has a set amount of locations to explore and you are tasked to discover the vital objects within. There is no movement and all you have to do is scan your eyes across the screen and pick out the items listed at the side. Sound easy? It’s not. Items are made to blend in with their surroundings, some are downsized and some are made a little larger than life.

One of the massive downsides to the gameplay is the way in which the hints for the items you need to find are written. Some of the clues are extremely specific, but a lot are also phrased in a very American way and those who are not used to this terminology will perhaps become confused and frustrated by the ever changing phrasing for the same item.

Sadly, as soon as you start to get into the flow of Mystery P.I. it starts to repeat locations you have already been to. Even though you may be looking for different items, this adds a sense of frustration and dull repetition. Difficulty also begins to start jumping all over the place, despite the fact you have seen these locations before items have been added or removed to bump up the difficulty.

Once you have found all the necessary objects, which seemingly have no relevance to anything, you are then given a quick mini game at the end to gain a vital clue. These mini games take the form of many different puzzles. Some will involve flipping tiles around to recreate a picture, others will play almost like Bejewelled or a very simple memory game. There are 25 clues in total, which makes for a rather tedious task. 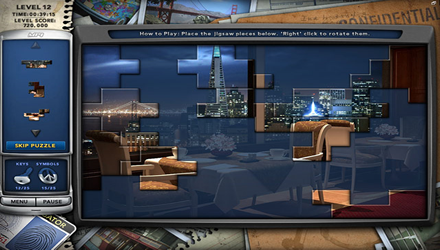 This scene seems a little familiar

Yes, there really is a U.F.O on top of that scrap heap. Oh, and a fox.
As there is no movement within the game, each location you are sent to is simply one huge painted scene. The graphics aren’t terrible but they aren’t anything to write home about either. The real locations set within San Francisco have just been littered with a peculiar assortment of objects for you to click on in the hopes that you are right. Most of the scenes look like someone has just opened a door and thrown out a load of old junk that should have been taken to a charity shop.

Are we in an elevator?
The only music there is in the game is a quite dull and uninspiring murder mystery style loop that does begin to grate after a while. I found myself turning the music off completely so I wouldn’t fall asleep whilst playing and could have my own music on during the game.

Keep your money and stop wasting my time lady
Mystery P.I. starts off as a reasonably enjoyable game but soon becomes monotonous and more than just a little bit aggravating. It’s not a bad game but it’s not good either. By the time you finish it, there is no sense of satisfaction but more relief that you never have to look at any of these locations ever again.

If you rush through the game then it should probably take you no more than five hours to complete. This is a very long and laborious five hours however, and unless you particularly enjoy brain teasers and picking random objects out of a bunch of other utterly pointless stuff, then I would certainly think hard before purchasing the full game unless you have tried it out first.