Amongst the Wii’s library of well-established first-party juggernauts and family-oriented shovelware, the occasional title sticks out from the rest. Released in 2007 by Suda 51, No More Heroes was a prime example of one of these games. With a more mature slant than the average fare and an utterly barmy attitude, it provided something a bit different for the discerning gamer.

Fast-forward to 2011, and the developers have decided that it’s finally time to unleash No More Heroes on Sony fans, for better or worse. Subtitled ‘Heroes’ Paradise’, this updated version promises HD graphics and Playstation Move support. Will Suda 51 have done a top job with this PS3 remake, or will it be more ‘zero’ than ‘hero?’

I would argue that there are several factors which determine an engaging narrative for the audience of a video-game. A likeable protagonist, logical content and structure, and a compellingly virtuous quest for the protagonist to undertake. No More Heroes: Heroes’ Paradise doesn’t conform to a single one of these criteria. Yet, my morbid curiosity for discovering what happened next in the bizarre story was one of the main factors which kept me going. 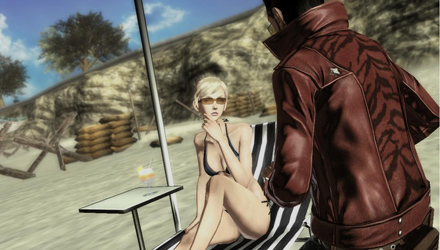 Women: The downfall of men, since the dawn of time

Tempted by the promise of earning money and renown, not to mention getting laid by the flirtatious French she-devil Sylvia Christel, Travis embarks on a questionable journey to assassinate… assassins, until he is number one, armed with a Star Wars-esque ‘Beam Katana’ he buys off the Internet. These eleven ‘ranking fights’ reveal some truly absurd characters to face, with equally ridiculous dialogue, rarely making an ounce of sense. Cut-scenes are mesmerising in their insanity, however, and as a result the plot is dangerously addictive.

Assassin’s creed
This is a good thing, because No More Heroes regularly falls far short of Paradise. Fighting is a monotonous button-mash fest, only broken up by the occasional wrestling move and the ultra violent finisher with which Travis dispatches every foe. Levels generally consist of bland, linear corridors, populated by repetitive waves of enemies. It’s the boss fights which are the game’s true strength, offering a real challenge in the form of battling each eccentric, yet uber-powerful, assassin.

In contrast to the outrageous story and cast, the town of Santa Destroy is a mostly characterless shell of a locale. Its only real purpose is to serve as a hub in which to access missions and shops. To get him from ‘A’ to ‘B’, Travis has an outlandishly enormous futuristic motorbike, fitted with gallons and gallons of nitrous oxide. A great idea in theory, if it were not for the fact it has some of the most criminally abysmal handling physics I have seen in practically any game I’ve played. Ever. 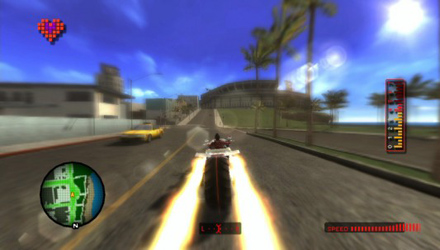 What's this button do? HOLY SHIIII...

Hurtling down the road in a straight line with the boost button pressed firmly down is all well and good, but attempting to corner is a nightmarish endeavour. Thankfully, half of collisions just end in an awkward-looking rebound, like everything is made of rubber. Not just that, but no matter how many multiples of the speed limit Travis is cruising at, the brake instantly brings him to a jarring halt.

Add to this the tendency to get stuck in scenery and jerk clumsily all over the place like the game doesn’t quite know where to place it, and Travis’ bike can probably only be beaten in driving-physics-unrealism by the vertical-scaling, infinitely accelerating trucks of Big Rigs: Over the Road Racing. Oh, I’ve just spent several paragraphs going off on a whinging tangent, haven’t I? I don’t care; it’s an absolute disgrace that really brings down the game’s apparent production values.

The inclusion of Playstation Move controls is dampened by the fact that you still have to mash a button to swing your sword like in the Wii original, with gestures reserved for finishers and wrestling moves. Every so often, Travis’ beam katana runs out of juice, requiring you to shake the Move up and down in a blatant reference to masturbation. As you can imagine, this becomes less funny each time you do it. The rest of the attempts at humour throughout No More Heroes are equally as crude and unsuccessful, such as the fact that Travis sits down on the toilet in order to save the game. 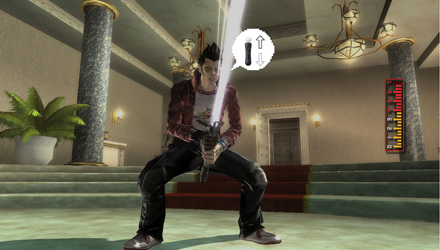 What a wanker. No pun intended; he genuinely is a tosser.

Between each ranking fight you’ll have to scrounge together enough cash in order to pay for the next one, in a cheap and uninspiring method of prolonging the game’s length. The real stinker is that this is achieved through repetitive all-you-can-kill missions, and mini-games composed of menial tasks. Mowing lawns and picking up litter are amongst the chores Travis must grind through to earn himself enough dollar, and Suda 51 have really triumphed with regards to the realism factor here; every errand is genuinely as boring to perform as in real life.

In fact, No More Heroes would probably be an excellent moral story for children about the importance of work despite its triviality, and for promoting aspirations of aiming high and reaching for the top. The only minor detracting issue, of course, is the glorification of murdering countless people for cash, sex and fame in lavishly gruesome ways. On second thoughts, scratch that idea…

Something to Marvel at?
No More Heroes opts for a colourful, cel-shaded graphical style to complement its bombastic attitude and comic book references. Retro screen overlays and arcade scoreboards are charmingly fashioned as throwbacks to the 8-bit era in appearance. Fights gratuitously shower sparks and coins all over the place, and, in a new addition to this ‘Director’s Cut’ release, copious torrents of blood. Along with the glowing lightsaber weaponry, battles are flashy enough to cause severe concern to epileptics. 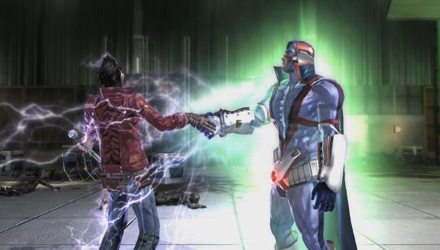 Should have known you couldn't trust a grown man in a superhero suit.

Visuals are arguably more style than substance, however, with naff textures, unappealing environments, and jagged aliased edges letting the side down. The game is far from an eyesore, but hasn’t taken as much advantage of the PS3’s extra grunt as it could have done, after being ported over from the Wii.

Aural assassination
Dialogue throughout the game is ridiculous nonsense, paired with equally atrocious voice acting. I get the impression that the script was translated from Japanese with complete grammatical accuracy, but little consideration of the actual meaning it was trying to convey.

8-bit tunes and sound effects further show some love for classic gaming, and even though the background music has a more modern style, the tracks still sound retro in composition. Too retro in fact, as one of the main fight tunes is extremely repetitive and is used very frequently throughout. This gets drilled into your head like an electric screwdriver, and feels just as pleasant to listen to.

Paradise won, or Paradise Lost?
For a game that is so action packed at heart, it’s baffling how much the proceedings are interspersed with drudgery. Frequent, disruptive load times also frustrate and slow down the game’s pace. Overall, a disappointing effort on improving the fairly archaic graphics, gameplay and design makes the title feel distinctly too much like it is from 2007, or dare I say, even older than that.

No More Heroes: Heroes’ Paradise is undeniably unique and profoundly bizarre, but then again so would be blindfolded-battle-armour-underwater-foot-fetish-porn. Is that justification enough for its existence? I’m not so sure.