If you’ve read any of my previous reviews, you’ll know my hate affair with Nintendo’s Wii knows no bounds. The pre-launch hype about the control method was, in my opinion, just setting us up for a big fall and the general quality of the games has been shocking. It just feels wrong; like a cheap and nasty way of coercing people into playing tawdry excuses for video games in an effort to include a group that have next to no interest in the field. Occasionally however, a developer will use the Wii and its unique, if not twee, control options to its advantage and produce a gem.

While developer Grasshopper Manufacture haven’t quite managed to achieve this with their latest release No More Heroes, they have managed to make a quirky little game that can be lots of fun to play. It can also be the most irritating, boring and downright confusing pieces of entertainment on the console. Let’s take our beam katana to it and find out why.

No more heroes anymore…
So let’s start at the beginning. Travis Touchdown (yes, you read that right) is an ex-Mexican wrestler and wannabe assassin who splits his time between sleeping and lounging around in his dilapidated motel room watching porn and drinking. Oh, he also swears a lot, and would probably be serving time in the local prison for being a pervert if this was the real world, which it isn’t. Instead Travis lives in Santa Destroy, a mixture of Sin City and Venice Beach where it’s almost perpetually daytime and everyone is either beautiful or very weird-looking. After winning a beam katana (a strip light/lightsaber hybrid) on the Internet, Travis bumps into sexy young thing Sylvia, a representative of the United Assassins Association.

Skint and bored, he accepts a contract to kill the eleventh badass on the UAA list, in order to take said badass’s place. Defeating number ten locks Travis in a sticky situation; for some reason no one cares about you unless you are in the top ten of all assassins; now he’s claimed his place on the list, he must battle through to reach number one before he’s taken out himself by a young whippersnapper. This extreme flip in roles is jarring and confusing, but has little effect on the gameplay. The rest of the story is reasonably written and colours the game somewhat, but its obvious from the start it’s there solely to break up the violence. No bad thing, considering how fun the violence is.

Cartoon violence for the win!
The main words that come to mind when actually playing No More Heroes are; monotonous, fun, repetitive, fantastic, boring, crazy. Ok so those words contradict each other, but so does the game itself. It’s split into two distinct parts; the first is the meat, the beef in the sandwich; the combat. Playing like God of War if it was made by a hyperactive child, it consists mainly of hitting A until an arrow appears on-screen, then flicking the Wiimote in that direction. There are kicks, throws and special moves thrown in for good measure, but the bulk of the combat is repetitive, sometimes monstrously so. Spicing up the mix however are the bizarre ‘Dark Side’ bonuses, activated by lining up three slot reels at the bottom of the screen.

Explaining this will go some way to getting across just how odd this game can be. You do a finisher (the Wiimote flicking I mentioned earlier) which starts the reels spinning. If all three match up, you get a bonus. This can be anything from bullet-time to instant kills. When it activates, a small, pixelated tiger which sits constantly in the top right of the screen begins to move left, to reach a newly created goal symbol. When the tiger gets there, the bonus is over. That’s just a small example of how eccentric No More Heroes is. 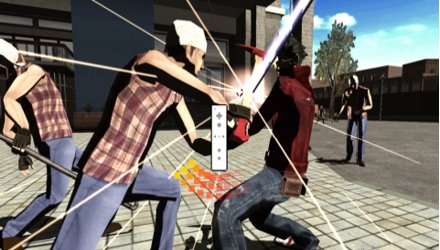 Lightsaber vs Crowbar. Take a wild guess who's winning this one...

Despite what I’ve said, the combat is actually a lot of fun. Hacking and slashing through an army of suits is more exciting than it sounds and the range of specials and bonuses keeping it fresh, for the most part anyway. Hitting the A button over and over inevitably gets old, but the boss battles serve as a reason to endure. Each one is unique, in both character and fighting style. Some require lightening fast dodges and blocks, others quick combos or power moves. The variety of these battles go some way to rescuing No More Heroes from drowning in its own monotony juice. Shame then, that the other half of the game pushes its head down further.

When you’re not on a mission to kill another assassin, you are forced to do menial tasks to earn money. This money can be used to buy trendy new clothes, upgrade your beam katana and, most importantly, buy your way into the next fight. If collecting coconuts and cutting grass for a grumpy employer wasn’t enough, you’re hindered further by the size of the city. With only around 20 places to go, why did Grasshopper put them all over the city?

Riding Travis’ oversized motorbike is the only effective way to get around, and I got tired of riding across the city over and over to earn a pittance. The mission office is on the other side of the city to the actual mission. In games like Grand Theft Auto, travelling is fine because there’s stuff to see and do. In No More Heroes, it feels pointless and annoying. Hit other cars or people and nothing happens. The city reminds me of the Truman Show; it appears to be bursting with life but look a little closer and it’s all just for show. The amount of time I had to spend driving to and from jobs and shops almost made me put the game down for good. I only continued because I had to finish it so I could tell you guys how annoying it can be.

Walking on the beaches, looking at the peaches…
Instantly you can tell that No More Heroes has had a lot of care and attention put into its looks. Brightly cel-shaded and vibrantly animated, every frame explodes with life and eccentricity. The concepts are typical Grasshopper, and the art style and twisted designs seen in their previous hit, Killer 7, are more than present here. The city of Santa Destroy does beautiful and grimy in equal measures and the general look of everything screams cheap-but-great 70’s cop show chic. The character designs are a car crash of East and West, combining Manga tradition with Western retro styling’s.

Even the identikit bad guys are stylized, albeit not as much the stars. While much of it feels unnecessary, it adds polish and sheen. Unfortunately the technical limitations of the Wii are very apparent, with jagged edges, poor renders and even graphical tears evident on closer inspection. Despite this setback, Grasshopper have done a great job with the mediocre tools they had, and No More Heroes manages to achieve a unique style that’s instantly recognisable. 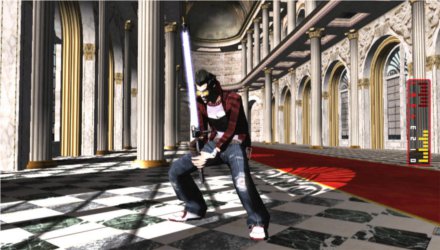 I'm recharging my sword! No really, I am!

Nice ‘n sleazy
No More Heroes soundtrack is a bizarre mash up of typical J-metal silliness, the likes of which proudly adorn the F-Zero games, and Oriental hip-hop. Sometimes combining both in one song, other times switching between the two, it sets the scene brilliantly. It also, at times, gets on the old nerves. The range of actual songs is small, playing the same chuggy rock track for every single fight. The looped hip-hop didn’t really do it for me either. The game’s charm renders this forgivable, but there’s still no need for a shitty soundtrack. The characters are voiced well, if a little woodenly with some genuinely funny lines. The beam katana ‘vrrrums’ like the lightsaber it blatantly is, sparking and crashing when it hits enemies and lending the game some solidity in the combat sections. While offering nothing special, No More Heroes audio is functional, although it suffers from the repetitiveness experienced in other aspects of the game.

Walk on by
Ok, so it’s fun, but is that really enough to make me care? Unfortunately in this case, not really. I get the distinct impression Grasshopper found a winning formula, made it look very nice and then copy-pasted it ten times over. The story is engaging but only on a superficial level, the between-mission boredom grates very quickly and the simplistic combat will bore most people in the first ten minutes. It feels like No More Heroes was conceptualized by a four year old, then written by an eight year old before being passed though a committee of ten year olds who decided it was ‘way cool’ and published it.

Problem is, there’s something about it. Unusually for me, I can’t tell you exactly what it is. It could be the charm, the style or the swagger. It could be because I like cutting things up. Whatever it is, it kept me playing until the end, despite the game’s sometimes infuriating shortcomings. Far from a classic, No More Heroes sits in a niche carved by its stable-mate Killer 7 before it; a game that is full of annoying ‘WHY?!’ moments, that you will enjoy for a reason you just can’t place.