Pictionary has been around for about 25 years now in the form of a popular family board game, involving frantically scribbling down picture clues for your teammates to guess. With its touchscreen and stylus, the Nintendo DS is perhaps a no-brainer of a platform for bringing a drawing game like Pictionary to. This obviously must have occurred to THQ games as well, and the rest is history. I’d heard of the Pictionary board game and knew of its basic concept, but had never actually played it myself, so trying it out on the DS was an entirely new experience.

What you have to take into account is that this is essentially a game of a game, so an important question is whether bringing Pictionary up to date with the use of technology was either a worthwhile exercise, or akin to the motorised ice cream cone in pointlessness.

A narrative that really draws you in

In Pictionary DS, you and your entire family have been kidnapped by cruel trolls and taken to their secret cave. For their amusement, they challenge you to scrawl pictures on a cave wall with your fingernails that your family must identify. If your family wins, you escape with your lives, but if the trolls win, you are barbecued and eaten. I’m kidding; Pictionary has no storyline. I’m kinda beginning to wish it did though, now…

It’s a bad habit to play with yourself
The good news is that this iteration has made it possible for people to play on their own, something previously impossible for a board game requiring four players and up. The bad news is that in my opinion, the single player mode sucks. Sorry to be brutally harsh, but if you were planning to buy Pictionary for its single player component alone, I’d tell you right now not to bother.

On popping the cart in your DS and switching the game on, you have to select your language every single time (presumably in case you’re multilingual and fancy mixing it up every now and then), and then create a profile, with a hand-drawn avatar. So, one obligatory crude phallic illustration later, you select the one-player board game mode, are spoon-fed some brief instructions then get to dive straight in. With little more than a straight A-to-B board to reach the end of, increasing in length with the difficulty mode, the objective is fairly straightforward. 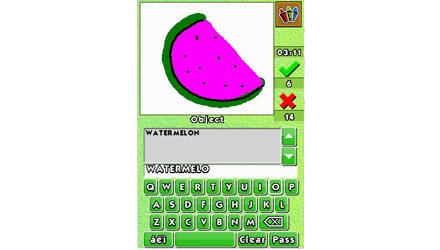 Yeah, don't let this innocent-looking image fool you. The AI drawing in this game is maliciously incompetent.

To progress, you have to beat short challenges to guess what a picture clue represents within a minute, then get to roll the dice to move forwards. Obviously there is no one else around to draw these picture clues for you, so the computer takes the role. This is where the problems start. If you’re playing Pictionary with mates and they draw something that looks more like a deformed primate than a dog, you can just scold their incompetence or slap ‘em about, and have a laugh. Working together with the computer is an entirely different matter, however, as when faced with something completely indiscernible you will want to scream about how unfair it is.

In my experience it really seems to go from one extreme to another, with the computer giving you either three sixes in a row and perfectly lucid drawings of cake and teddy bears to work out, or refusing to let you roll any higher than a two and electronically vomiting all over the screen to illustrate Einstein’s theory of relativity. Three strikes and you fail the game, so even with a predictive text function that can help you solve some words and doesn’t display any answers that don’t exist in the game, this can still be quite a difficult challenge considering it is a title that will likely attract kids. Often, even the easy mode can elude you for a few tries in a row, as the clues don’t really seem to get any easier, just the distance to travel on the board gets shorter.

If you like your frustration nicely compounded, there is a streamlined Quiz mode that throws drivel picture after drivel picture at you in quick succession until you get three of them wrong. This is unsurprisingly even less enjoyable. Overall, for a solo experience, Pictionary is a consistently poor offering. Probably the aspect of the game I enjoyed the most was getting to manually roll the dice with the stylus. Wahoo, look at it go! 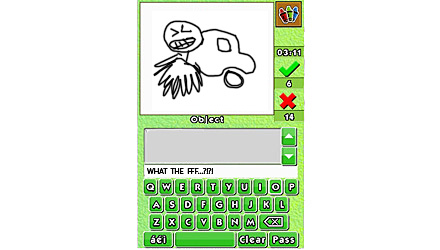 This is more like it. A mock-up of a genuine picture I received once. Answer: "Blow Out". Blow it out your ass.

Picturesque?
Obviously by today’s standards, the Nintendo DS is really showing its age in terms of graphical power, just a few months away from the release of its much more impressive-looking successor. This combined with the fact that it is essentially just rendering a basic board game and some doodles on a piece of paper, means that Pictionary is decidedly lacklustre in the visuals department.

That said, it does what it needs to do, albeit with little fanfare. The graphics are at least colourful, and there’s the occasional animation, usually of the dice rolling about or your player counter bouncing along the board in a jolly fashion. To be honest, this isn’t the style of game that needs a lot of visual pizzazz, as it would probably just be distracting. 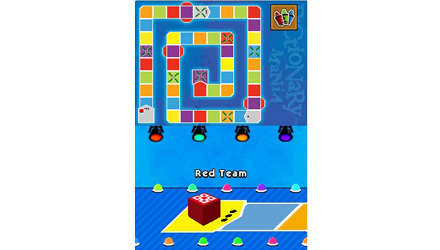 “Let’s play Pictionary!” *reaches for the off button*
If a board game title doesn’t need pretty visuals, it certainly doesn’t need good sound effects either. Thank god for that then, as everything that Pictionary blurts out from your DS speakers is utter tat. The first thing you’ll be assaulted with is the over-excitable announcer, as well as a delightfully torturous theme tune that loops over and over every few seconds until you’re whistling it against your own will, and slapping yourself as punishment for doing so.

There’s little else but the odd sound effect, like a dice rolling, or your head smacking itself against the wall. The soundtrack for Pictionary really isn’t very likeable, but here’s a pro-tip to make it more enjoyable: Locate the small slider on the bottom left of your Nintendo DS, and firmly slide it all the way to the left. There, isn’t that better now?

Time to party like an arty… ist.
Surely for Pictionary, a multiplayer game at heart, this mode is its saving grace? You can all breathe a sigh of relief folks, ‘cos this is where things start to look up. The bad news first: Just like the board game, to get the best out of it, multiplayer shouldn’t really be played by any less than four players. So if you don’t have many friends, you’d better start making some.

Once you’ve got together enough begrudging players however, Pictionary is quite an achievement for the amount of fun that four, six, eight or potentially even sixteen people can have from one portable console; a piece of tech that is essentially designed to keep one person amused at a time. The DS is passed between the teams, with one person designated the ‘Picturist,’ and the others in the team having to work out the clue. Essentially like Microsoft Paint, there are a variety of different colours and tools to choose from when doodling your ‘masterpiece,’ affording a little more creative license than the old pencil and paper method. 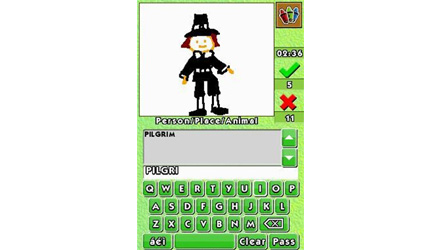 The game in general magically becomes a bit more in-depth and exciting when in multiplayer mode also, particularly in Pictionary Mania mode. This brings in randomised conditions to give an extra challenge to drawing, such as Ink Limit, No Peeking and Off Hand, all quite self-explanatory. These really make the game a good laugh, by turning your attempt at Mona Lisa into what looks like a cabbage on a mountain, for instance.

In multiplayer a certain amount of seriousness and honesty is required to play the game properly, but the same is true for all board games. Who hasn’t slipped themselves a few notes as Banker in Monopoly, or moved their chess pieces around when no one was looking? Pictionary DS, just like its less technological ancestor, really comes alive with lots of people playing, and heroically rescues the title from being an utter flop.

A final neat little addition is the ability to make your own clues to appear in the various Pictionary modes by drawing them, or even taking pictures with the inbuilt camera if you own a DSi. The latter in particular is a little stroke of genius, even if it is potentially open to horrific abuse.

A work of art?
It’s a shame that single player Pictionary is such a failed experiment, but perhaps due to the nature of the game it will never be the same as when played by four or more people. What this game offers is a great little party experience to enjoy with mates, where you only need a single DS console and one copy of the game; wireless play with multiple consoles is a possibility, but only optional and not really necessary.

The problem is, is that any attempts at amusing less than four people at once are utter rubbish, so this will probably only be a title you play occasionally. On the upside, it’s already a bargain-bin title that can, at this time of writing, easily be found for less than a tenner from popular online retail stores. So as long as you’re not a hopelessly reclusive outcast, Pictionary DS is worth a try.