Ah Ubisoft. Your cunning plans of using evil DRM were thwarted via the gaming public so you decided to go with the sensible option on your latest strategy game. A good choice too, as R.U.S.E. is an excellent entry into the RTS genre that takes a familiar setting and puts its own spin on it through the use of cunning plans.

The story, or is it?

R.U.S.E. takes place in World War 2, with you taking control of a single General on the Allied side. For the first half you are General Sheridan, fighting from Tunisia to Germany via Italy and D-Day and seemingly responsible for most of the major breakthroughs of the war and saving French troops left, right and centre. It’s the standard strategy game campaign, with wooden acting, annoying voice actors (the American female advisor is perhaps the most) but it acts a good tutorial for multiplayer, introducing you to all the concepts required to play the game. Each location is split into three or four missions which play over the same area, making it feel like you’re part of an ongoing operation, especially when your allies are advancing alongside. There are also a set of bonus objectives, most of which are just common tactical decisions with bonus points but others are strange and arbitrary additions. 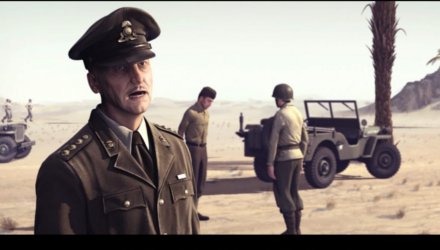 I have a cunning plan…
At first glance, R.U.S.E. appears to be a very simple ‘build units and attack’ sort of game. You must maintain your supply line while building up your forces from a selection of types and then gain the highest score before the time runs out. Unit types lead to a rock-paper-scissors-aircraft style of game, although in some cases you can simply just swarm the enemy units human-wave style.

The main change to this formula is the addition of the RUSES system. These are power ups that can be applied to sectors on the map to gain an advantage. They range from camouflaging your buildings or units up to decrypting enemy orders so you can work out what the opposition is planning. Unlike other games, where the little additional elements (such as Company of Heroes’ Company Commander Abilities) are optional and battles can be won without them, R.U.S.E. requires you to use these twelve abilities to win. There is no reason not to; out of all twelve, I can only think of one that I haven’t used regularly in both campaign and multiplayer but even that one, which switches around the appearance of unidentified units, is still a neat thing to use. All of this can lead to cool setups, where a fake assault on the left, combined with radio silence for your units on the right, allow you to blitzkrieg the enemy defences and to take their base.

There are six building types which produce a whole host of different units, from light infantry all the way up to super heavy tanks and strategic bombers. Each has its own proper purpose and the correct use of these differences, along with the RUSES, allows for a rather satisfying victory. Some of the units are cool in themselves, such as watching a fleet of bombers getting ripped to pieces by some mobile AA or an infantry column having a metric ton of lead dropped on it by at least three different artillery pieces.

I do have one point to make about the gameplay of the campaign; you eventually reach a point where you are close to having unlocked all the units and buildings available to you but are still missing one or two units. I found this bit so frustrating; there a situations where the best tool for the job isn’t unlocked for a purely arbitrary reason despite having used it in the mission previously. Due to this, the later levels have a massive difficulty spike which can be really frustrating but it does work very well as an intro to the multiplayer.

As well as the competitive multiplayer I’m yet to talk about, there are also two other single player modes to increase the amount of playing time. “Battles” is simply skirmish games against the AI. The computer seems pretty clever, using RUSES and unit combinations like a real player would and also reacting to your choices. Operations on the other hand are a series of challenges that are designed to see if you can solve the problem given to you. These are a combination of realistic scenarios and purely fake but unique set ups such as fighting against Russian’s, German’s and French all at once. They are an interesting inclusion but I prefer the multiplayer. 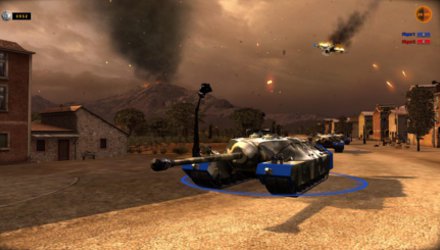 A giant angry house, or is it?

Graphics:  made of wood and cardboard to fool you
R.U.S.E. is the best looking RTS game in a long time. It has a very similar look to World in Conflict (a game it also shares its camera controls and fast paced battles with) with units swarming over maps while aircraft buzz over head. When zoomed in it looks stunning, as properly proportioned units drive through the streets and rounds smash in the ground alongside cowering units. You don’t see them hugging cover, like those in Company of Heroes but that is a small price to pay based just on the scale. The game also implements a bit of camera shake, so when you place your camera close either firing units or places of impact it shakes like crazy. It’s a pretty nice effect.

Rolling the mouse wheel zooms you out ever so slowly. As you move away, units change to chips, clouds begin to appear and it starts to look like an old tabletop game (sadly no hex’s). Zoom even further and you soon notice that it actually is a table in one of several war rooms such as on the bridge of a battleship for D-Day, or in a desert tent for those in North Africa. This is a really cool cosmetic feature that helps to make you really feel like a WW2 general.

Wait a minute, that doesn’t sound right…
Apart from the voice acting in the single player, I’m quite impressed with the audio in R.U.S.E. Notification sounds, alerting you to facts such as buildings destroyed or supply lines under attack, are crisp and to the point while also easily audible above the sounds of battle. Artillery sounds really powerful (especially as it flies past the camera) while all the other weapon sounds are a joy to hear. The unit’s vocal responses are also pretty good, though the audio is mixed slightly strangely so they are really quiet. This might be another way for R.U.S.E. to maintain your position as a general, giving you a muted link to your units.

Lying to friends
RTS games often have a feel to them about what the dev team was focusing on and R.U.S.E. definitely feels like a multiplayer game. The game is insanely well-balanced (due in part to its several months long beta) and so it is down to player skill in the use of units and RUSE’s that lead to victory rather than some huge imbalance. I’ve played a few matches and it seems pretty populated still weeks after release. It’s also great fun to play in all its various team set-ups, despite being limited to simple points amassing rather than king of the hill style modes. 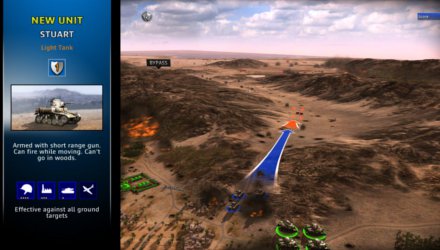 R.U.S.E. uses Steam for all of its matchmaking and stats tracking, so on PC a steam account is required. I do also like the fact the save games are stored in the steam cloud, which was very useful when my PC had issues mid-review (unrelated to the game). The game also uses Uplay, which does require you to login and gain points if you want to unlock a multiplayer map and an upgraded version of a standard unit. Ubisoft, please don’t do this; we already have enough achievement style incentives from Steam, Xbox Live and the Playstation Network and locking out key content is kind of a big deal.

Some final, truthful, thoughts
R.U.S.E is one of the few games that has taken the RTS genre and shaken it up a little to create a game that is easy to play but tough to master entirely. It also is presented beautifully with excellent graphics and sound. I look forward to seeing where this game goes next, hopefully Ubisoft will use Eugen’s Irisoft engine to pump out some more large-scale battles. I recommend R.U.S.E. to everyone from newcomers to hardy RTS fans.