Load up your weapons and fasten your seatbelts, you’re about to take a ride through the good old Red Planet, and it’ll need your help. Your mission, should you accept it, will be to liberate the planet Mars from the domineering Earth Defense Force. Your methods will vary. You may choose to stealthily avoid your enemy in order to safely rescue POW’s, and then blast your way out with brute force; or you may locate the enemy’s stronghold and bring the building down with everyone inside. Whatever you decide, you’ll enjoy every moment of this awesome experience.

In this game, you’ll take on the role of Alec Mason (not to be confused with Alex Mercer from Prototype) whose first day on Mars ends up much more exciting than he expects it to be. Within the first five minutes of the game his brother is killed, and he’s conscripted into a terrorist organization called the Red Faction.

The story’s pretty dry, and the single twist is made so painfully obvious right at the beginning that you may wish you could’ve written the story yourself. The characters aren’t anything to brag about either. Alec is one dimensional, and all of his Guerrilla buddies are absolutely static and uninteresting. Luckily for us, though, there aren’t many cutscenes. In fact, there aren’t more than ten. 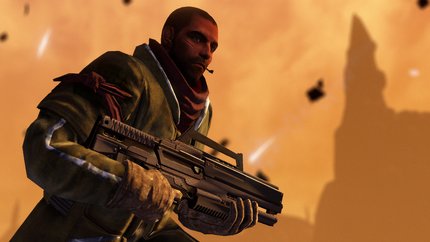 Attack of the Martians!
So, now that you’ve lost a sibling, joined an anarchistic order, and committed your first act of public vandalism, what’s the first thing you’re gonna do!? You should probably just break out your trusty hammer, bash through the supports of a few buildings, and watch them succumb to your might. The level design of Red Faction’s Mars is, delightfully, unable to be addressed confidently. About ninety percent of everything you’ll see is completely destructible, and if your wish is to bring it all down then you may.

If you want to perform a quick hit-and-run, you might grab an armored vehicle and ram it right through one side of the building, drive out of the other side, and continue to whatever destination you’re searching for. Whatever method you unleash upon the armed forces of the EDF, you can be sure they’ll have their hands full dealing with you—especially once you get behind the wheel.

Be careful how you drive though, because the cars in this game don’t have the best handling. Controlling your vehicle is good enough to be passable once you’re used to it, but the moment you climb behind the wheel of any automobile in the game, you’ll wish you had a little more control. It’s made up for by the fact that you can turn your out-of-control vehicle into an out-of-control weapon, though.

You’ll mainly be running your cars into the previously mentioned EDF (Earth Defense Force), an armed military force which represents the presence of Earth, and its powerful grip on your beloved planet. Enemies will mostly stand in tight groups, firing on you with an unremitting volley of bullets, gauss rounds, and more bullets. In defense, you can take cover behind the highly destructible walls around you, but this is at your own caution. The cover system is completely imprecise, and seems to choose when it will work and when it won’t. If you’re a stop-and-pop shooter fan, mostly into the likes of Gears of War or Uncharted, you’ll struggle to enjoy the gunplay here. 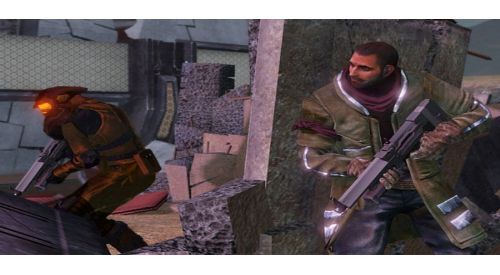 When you’re not fighting the cover mechanic, though, the gunplay is really enjoyable. It’s nothing that’ll make you want to put down the hammer or the Nano Rifle (which disintegrates the enemy in one shot), but it’s fun enough that sometimes, rather than running, you’ll hop out of your vehicle or turn to the army firing on you and pump round after round in their direction. Most of the time, you’ll probably prefer to bring down the building your enemies are in anyway.

Your cause for firing on the oppressing EDF army won’t be just to stick it to the man at your own discretion, either. You’ll get the chance to find many cool missions scattered around the towns. It’s really immersive and fun when you join a group of Faction members to perform a raid, or you’re on your own attempting to take down an important building and get a call on your radio that some of your friends in an important stronghold are in trouble. Then and there, you and Alec will seem to have arrived at a crossroads—should you abort your current mission, possibly of equal importance or more, to help your distressed teammates, or should you stick to what you’re doing and take the loss? Unfortunately, one of the roads is shallow because it seems that choosing not to help your friends won’t bare any punishment.

The greatest fun will be had during the game’s most important Guerrilla Missions. In these you’ll be assigned seemingly suicidal objectives against insurmountable odds, but if you complete them the payoff is well worth it, because most of the time completing a couple will unlock a new area. You unlock the Guerrilla Missions by completing the normal missions, such as finding cars which the Faction can use for whatever ambiguous reason, holding off a group of EDF attackers as one of your fellow members completes a job, driving around destroying important buildings with your good buddy Jenkins, or completing raids and things like that.

Woah… Look at all those mountains!
The visual style of Red Faction isn’t very unique in itself. Everything is really drab and beaten, which matches the  theme of the towns and cars belonging to poor miners, but doesn’t set it apart the way the landscape does. As mentioned before, the areas are all different, and they’re all really cool to see. This is mostly because the colors of the land are a huge contrast to most games of today which are gray or, if based outside, green and brown. You’ll see that one of the early areas, Parker, is extremely bright red, which one might typically expect to see of Martian land. On the other hand, towns you’ll see later will have landscapes which range from gray, beige and brown to orange, and purple.

As for the characters, well… when Alec is shot, he starts to sweat blood profusely, as though absorbing the bullets are more of a workout than painful. When you avoid damage for a short while, your blood/sweat will dry up, and you’ll look good as new again! Yay! As well as that, all of the characters do have a fluorescent outline which makes it easier to distinguish the characters in the blurry background from the landscape at times.

KABOOM!
The sound quality in Red Faction is top notch. Though gunfire, explosions, and building collapses sound as raucous and epic as you’d expect, they don’t make inaudible the voices of your buddies coming in over the radio. This is crucial to completing a mission, because other than the “Mission Objective” icons on your map, there’s no way to check what exactly you’re supposed to do next if you miss what you’re told. Other than that point, there’s nothing much else to say about the sound. 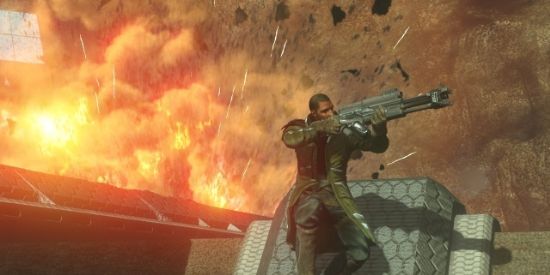 Frag faction
The online is competent. There are very few situations where lag is an issue, and there aren’t any special modes unique to the game itself. Rather, there are unique twists to the modes. Damage Control, for instance, works a lot like Call of Duty’s Headquarters. You hold multiple positions, and the more positions you hold, the faster your team’s points go up. But the positions you hold are taken and controlled by breaking the enemy’s tower and reconstructing it yourself so that it belongs to your team. You can unlock new costumes and rank up as you play on, but there’s nothing else special here.

As for the local play, Red Faction offers Wrecking Crew, a mode in which you set the amount of players who’ll participate and then hand off the controller each round. You’ll be given different situations, like who can kill the most enemies in a certain amount of time or who can destroy the most property under a time limit. The catch for these situations might be that every shot fired reduces how much time you have left, forcing you to make every shot count. It’s a pretty cool mode, and it’s definitely fun to play with a group, so if you’re playing a few games for a small party you may want to pop Red Faction in.

Mission accomplished
There you are, soldier. You’re ready to fight for the freedom of Mars. Kick some butt, change your underwear, and don’t forget to look both ways before blowing up a building! Oh, and buy this game right now. That’s an order, private!