Let’s face it: we’re already inundated with shooters at the moment. Modern Warfare 3, Battlefield 3 and Gears of War 3 are amongst the many titles that have allowed us to spray bullets in each other’s faces lately. Unsurprisingly, it’s all getting a little too déjà vu for some. After all, these sequels are not only similar to their predecessors in each respective franchise; you could argue that the series themselves are becoming more alike with each iteration.

… ‘Hang on a minute!’ I hear you exclaim. ‘Yet another World War II shooter? I thought this was meant to be something different; the World War II genre died a death years ago for being too samey!’ Well, don’t click that ‘close tab’ button in disgust just yet.

Red Orchestra 2 has more than a few tricks up its grubby, blood-soiled sleeves, opting for a uniquely realistic but mostly accessible simulation of the hackneyed and overworked era.

The Red Orchestra series has humble origins, initially coming to light as a mod for Unreal Tournament 2003. As such, the focus has always been on multiplayer. Although Red Orchestra 2 has a basic single-player campaign, the plot accompanying it is paltry at best.

Short stylised cut-scenes fill you in on what little there is to know. Set around The Battle of Stalingrad, you’ll take part as the Wehrmacht in struggles to occupy Russian territory, intersected with brief training missions. Complete this and you’ll unlock the opportunity to do it all over again, this time in the boots of your previous Allied rivals. 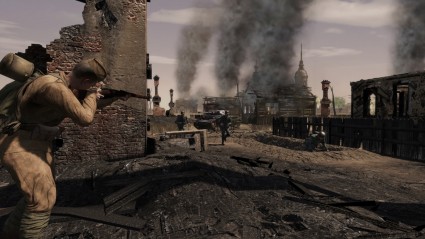 For what is one of the most realistic World War II simulators on the market, campaign gameplay is surprisingly arcadey. The experience is akin to single-player Brink; glorified training sessions to prepare you for the multiplayer mode, loosely tacked together with vague snippets of storyline. A brief introduction gives you orders and vague tips for the upcoming mission (feel free to disregard these) and then you’re plunged straight into the thick of it. In fact, your level of preparation probably emulates that given to a real World War II soldier. Well done Tripwire!

In all fairness, missions are simple enough. Every objective revolves around a Battlefield Conquest-esque style of gameplay; basically make sure that your dudes outnumber their dudes at the target location, in order to either capture or defend the position. You’ll often have a whole host of complex features at your disposal, like a clunky command wheel and even a surprisingly in-depth support radio system. These can be completely ignored, though; I didn’t resort to them once throughout the entire campaign.

It’s not the poorly implemented features that ultimately brand the single-player campaign as helplessly mediocre, however; nor is it the repetitive objectives or lack of an engaging plot-driven atmosphere. Red Orchestra 2’s biggest offence is its criminally bad A.I. Read user reviews of practically any other recent first-person shooter out there, and you’re almost guaranteed to see at least one gamer whingeing about sub-standard enemy intelligence. They ain’t seen nothing yet.

At least, not since the N64 and PlayStation One days. I’m not exaggerating. The A.I. of this game is genuinely comparable to that seen a couple of generations previous, over a whole decade ago. Soldiers recklessly frolic about, undeterred by the apparent danger of the situation; even if they do decide to take cover, it’s often on the wrong side of the wall. Their response to enemy contact varies between inhumanly potent accuracy and absolute drunken incompetence, not to mention the distinct possibility they might fail to notice them altogether and run straight past. 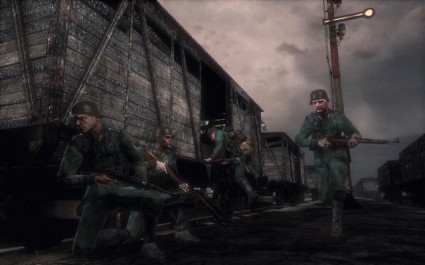 I'm opting for representing the single-player experience with symbolism here. Hint: it starts with 'train', and ends with 'wreck'.

It’s hard to fully appreciate a game’s efforts in creating an authentic and realistic experience when in-game characters are running around in circles like an excitable puppy that’s just been promised ‘walkies!’. Thankfully, these accomplishments are given plenty of opportunity to shine on the online battlefield.

The selection of armaments feel like genuine World War II weapons… or at least what I presume genuine World War II weapons would have felt like. Gunfire is subject to bullet-drop over long distances; manually dial in enemy range and you can adjust your aim to compensate. Properly aiming through the iron sights or scope is absolutely essential with any weapon, as blind-firing (especially whilst moving) will get you nowhere. 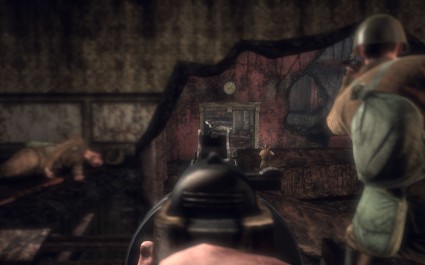 In fact, the transition from the one-man army superhero of many modern FPS games to the flawed, vulnerable soldier of Red Orchestra 2 is a little overwhelming to begin with. Your HUD is kept to a shocking minimum. Even the ammo counter is omitted, meaning you have to memorise the rounds in each clip or manually check the weight of your magazine to assess how empty it is. Soldiers can’t take much punishment before they hit the dirt, but survive a wound and you’ll have to quickly bandage it up to avoid further blood loss. Take a breather for as long as you want; you’ll never magically regenerate that lost health.

As you get to grips with the radical departure from the style of its peers, however, it’s easy to appreciate the refreshing authenticity and challenge of Red Orchestra 2. Strategy and caution are rewarded, with each confrontation a dangerous endeavour. There’s a lot more to take into account than simply running towards the enemy and shooting at them the fastest. Even a suppression mechanic has been implemented, a surprisingly effective portrayal of fear; subjected to enemy fire you’ll panic, turning your vision grey, shaky and blurred.

Content-wise, online multiplayer features a few different modes such as Team Deathmatch and Territory Control, and around a dozen maps. These generally consist of wide open spaces, rife with ruined buildings to nestle in and take cover. In scenarios such as this, sniper-spam would usually be an uncontrollable nightmare. Thankfully Tripwire foresaw this; all nine classes have limited slots available, with Marksman particularly restricted in order to curb scope-whoring. 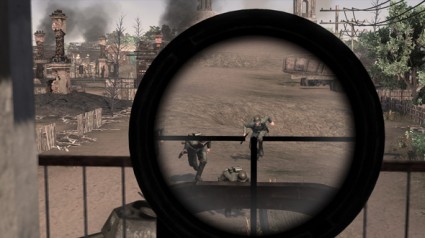 Scourge of the online shooter...

If you’re a fan of being overpowered then there’s no need to throw a tantrum if your beloved sniper position is taken, because there’s always the option of trolling around in one of the remarkably accurate tanks on offer. These need an entire crew to be fully operational, and suffer damage realistically when hit, slowly losing control and functionality.

Essentially, Red Orchestra 2 is a fantastic opportunity for WWII enthusiasts to experience a historic simulation of perhaps the most horrific war that has ever taken place on earth. That said, I’m confident that all but the most casual gamers could learn the ropes fairly quickly and get stuck in after familiarising themselves with the basics.

It’s a shame that technical inadequacies let the side down. Character-environment interactions are shaky at best, with frequent issues upon taking cover, going prone or vaulting over raised surfaces. Then there are the immersion-destroying bugs, like floating tanks and sudden, inexplicable deaths. Finally, button-mapping is baffling and seemingly arbitrary at times; the ‘Ctrl’ button, for example, is simultaneously bound to ‘use’, ‘cover’, ‘pick up’ and ‘bandage’. I don’t think I even need to explain the numerous conflicts that can arise from this downright senseless decision, and only a hack can rectify it.

War: a strain on the resources
Sadly, technical issues also hamper the visuals and performance of the game. My test machine isn’t the mightiest gaming computer imaginable, but it handles Skyrim admirably on decent settings, for example. Even after undertaking the typical troubleshooting steps, I had to set the graphical options at the absolute lowest of the low; a distressing but necessary sacrifice to gain an even remotely playable frame rate. Even then, frequent stutters hampered my enjoyment of the game. 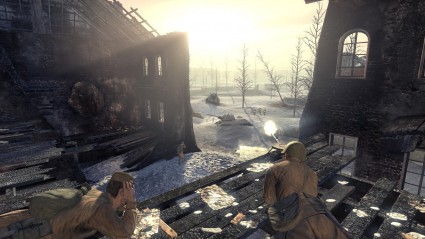 Obviously, at these settings Red Orchestra 2 looks sinfully grotesque, but ramped-up with all the bells and whistles (and at slideshow-levels of performance) it’s much more appealing. Whilst some object modelling appears outdated and the overall visuals aren’t exactly startling, it certainly has a subtle beauty augmented by attractive lighting and effects. The effort undertaken into faithfully representing World War II elements is also commendable; tanks are particularly impressive, with viewpoints inside the vehicle interiors that highlight great attention to detail in recreating their real-life counterparts.

Ready the orchestra
Red Orchestra 2 is complete with a dramatic, era-suitable orchestral soundtrack that alters dynamically according to the on-screen action. It also features some of the most sickeningly brutal sound effects I’ve heard in the World War II genre, with genuinely frantic and terrified screams, and enemies gargling in their own blood as they fade to black. It’s all slightly over the top, but chillingly impactful nonetheless.

Victory or defeat?
Tripwire have squarely aimed their sights at the demographic fed-up with generic shooters, and with Red Orchestra 2: Heroes of Stalingrad they’ve definitely succeeded at bringing something unique to the disillusioned. The level of authenticity is breathtaking, and rather than making the game inaccessible or dull, this adds to the experience and demands a different style of play than the norm.

It’s just such a shame that it all-too-often smacks of a budget release, hampered by clunky controls, iffy presentation, execrable A.I. and devastating technical issues. The developers have improved the situation since launch, but they still have some way to go. I hope they continue to support the game for a long time to come, as the potential here hasn’t yet been fully realised.