What looks like a game, sounds like a game, plays like a game but really isn’t a game? Anything labelling itself a geopolitical simulation, that’s what. Rulers of Nations, sequel of Commander in Chief, is one such product and unfortunately it is not a good game by any stretch of the imagination.

In Rulers of Nations, you take control of any current nation in the world and attempt to marshal it through 2011 and beyond via the current political situation. I have to say that the games does at least model this section quite well; nearly everything is up to date and although it’s at the start of 2011, all the events that occur are plausible. The scenario set also includes several other starting positions and objectives, such as withdrawing troops from Afghanistan or deal with the after-effects of global warming. It’s a gameplay idea I’m fully behind and would love to be in a game that does it well.

Playing the World for a fool
The problem comes when you actually start playing a bit more of the game. It starts off with small little inaccuracies (such as modified leader names) which make little sense in what is meant to be a simulation game. The biggest issue are the tutorials, which are vital in a game as complex as this. They are  broken, despite several attempts at various versions of the game. This is a fundamental flaw that makes the rest of the game next to impossible to play. There is some information in the dense manual, but even with this, the game is still pretty hard going to get into. This put me off entirely the first few times I tried playing despite the fact I really like other games in the same genre. 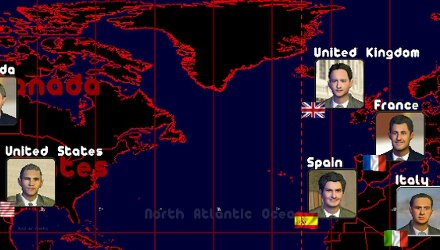 There is something very wrong with those leader's faces...

Ugly politics
Graphics in this style of game are not its forte and it really shows. Admittedly much of it is serviceable for presenting the vast array of figures it produces as you govern, with a strong use of archive footage and other such video clips to present news events or sudden changes in the political climate. Similarly the world map is a delight to look at, with its hundreds of units, towns, cities and other points of interest. However, the game also has several talking heads which are slightly unnerving, with low texture over an imperfect model with some quite rough lip-syncing.

You hear that? It’s the sound of revolution!
Sound is another area this game is lacking in. The ambient music that plays in the background is passable but entirely forgettable. The voice acting however is atrocious. I wouldn’t go so far as to say it’s painful but you’ve seen it done a lot better by smaller teams. I think the ultimate judgement on the fact is that I played most of the game with the sound muted. 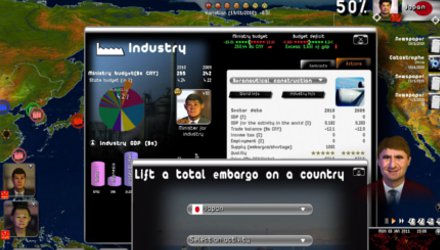 It’s lonely at the top
The game has multiplayer but at the time of writing it is lacking in players. Seriously, I didn’t find a single player to go up against in the game’s various scenarios and this is over several months of play and various attempts to get online. I get the feeling that its main draw is probably for single player.

In the end…
I really try to look for the good points in any game but unfortunately Rulers of Nations seems lacking in any decent aspects apart from its basic system. It’s an ugly game, lacking in polish in all areas and that mars a basic underlying set of mechanics that work well. Unlike one of my favourite series of games (ArmA), this is one training tool that fails to work as an actual game. I cannot recommend this to anyone.