When it comes down to it, the hardest part about reviewing a game like Scribblenauts is knowing exactly where to start. The most difficult things to capture in written words are the things we can’t begin to imagine, and yet here you’ll find a precise description of the game, from its foibles to its most incredible qualities. With pens and pads at the ready, it’s time for us to dive into the world of Scribblenauts.

A World of Trouble
Though Scribblenauts has no storyline whatsoever to speak of, the Challenge mode, which serves as its campaign, will give you more than enough content to cover for its lack of a plot. Challenge mode features ten worlds, each with twenty-two levels. Eleven of them are action levels and the other eleven are Puzzle. In case you’re bad at math that comes out to 220 levels in total.

In each level, whether Action or Puzzle, the goal is always to obtain a Starite in any way possible. When playing an Action level your only requirement is to get to the Starite, which may be hidden or at the end of a road lined with enemies. Conversely, Puzzle levels demand that you think a little more, as you may be tasked with a duty such as livening up a party in order to be rewarded with a Starite. In such a case, you might create a Disco Ball and streamers or a band and stage to put them on. Once done, though, you’ll always see a Starite emerge and be permitted to pick it up.

You Think It, We Build It!
Maxwell, the game’s protagonist, has no remarkable abilities except for one. Whereas Spider-man can swing from building to building and dodge bullets, Batman has his high-tech gear and training in martial arts, and the Hulk… smashes, Maxwell writes. Maxwell writes really well; so well, in fact, that whatever you doodle into the little pad on your touch-screen or type with the keyboard (also on the touch-screen) will be summoned into the game for your use.

As a result, no task becomes mundane. Were your mission to retrieve a Starite from a tree, you could create a trampoline and jump up and get it, create a fireman and give him an axe so that he cuts the tree down, or use a fishing rod on the Starite and pull it down. No matter what you think of, whether it be one of those things or none of those things, it will definitely be logical in the Scribblenauts world and almost definitely possible.

The term “almost definitely” is used because the objects at your fingertips only include words that are nouns, are not copyrighted, are not vulgar, do not reference race or religion, and do not reference drugs such as alcohol. That doesn’t mean the game includes all nouns, though. While playing through the game you may find a few menial words that aren’t completely necessary omitted from the list of items, but besides that you won’t be disappointed at all by what’s available. Unless you wanted to see Lex Luthor fight Baby Jesus. If that’s the case you will cry.

You control Maxwell by using the stylus and tapping the direction you’d like him to go. You also use the stylus to select and manipulate items, interact with environmental elements and characters, and attack enemies. What comes of that is a situation which may kill the fun completely at times.

In levels that require a swift hand and sharp mind, mistakes can mean the difference between achieving the ultimate goal and suffering the ultimate doom. So when you try to select an object which is thin or very small, such as an eel, rope, apple or what have you, you may end up missing it and having Maxwell sprint to where you tapped, which may ultimately lead to his death.

On top of that, Maxwell’s movements are sporadic, bordering on spasmodic. You may want him to take a small step closer to an edge or perhaps slowly pull a fragile item from the fray. What you’ll get for all your want is a sharp, quick, rushing sprint in the direction you tapped. It’s frustrating and completely unnecessary because simply swapping control over Maxwell from the stylus to the directional pad would’ve allowed camera control to be mapped to the touch-screen. That way, should you miss the item you’re trying to tap, you wouldn’t have Maxwell running headlong into failure. 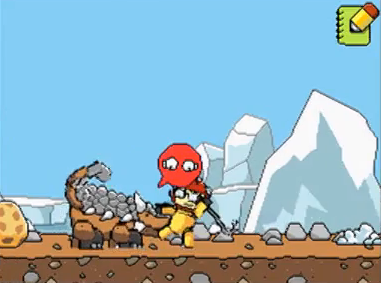 In what other game can you fight dinosaurs in a desert with huge glaciers in the background?

Those issues aside, you’ll have a blast trying to complete each level. Each is given a par, which represents the least amount of items absolutely necessary to complete the level. Should you go over par, like in golf, you’ll receive fewer points, and should you stay under you’ll be rewarded with more. These points are called Ollars and are used either in Challenge mode to purchase new worlds or in the Ollar Store to purchase images and songs.

Other than the purchasable worlds, the few items in the Ollar store and the start screen templates gained by writing in objects you’ve never before used, Scribblenauts offers no unlockables. Most platformer veterans will have grown fond of and used to unlocking new abilities to use in missions that were previously impossible. In Scribblenauts, rather than returning to earlier levels with unlocked abilities you’ll find yourself going back with newfound ideas. At the end of most levels that challenge you, if you’ve figured out a brand new way to accomplish a task, you’ll probably take a moment to marvel at the ingenuity you never knew you had. 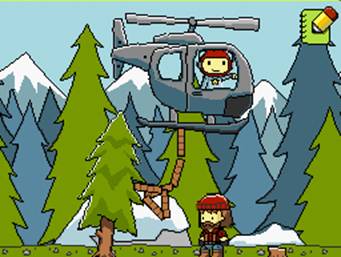 The visual representation of the game is both cutesy and comical. Scribblenauts seems more like it’s taking place in the mind of a four year-old than in a video game, and the way the game looks can clash with what’s actually happening in the game at any given time, which can be pretty humorous. Watching a chimp ride a helicopter over a flaming ditch filled with the carcasses of a Chupacabra army probably wouldn’t be as pleasing with Gears of War graphics.

What, Am I In Daycare?
The soundtrack of Scribblenauts, unlike the gameplay, does not clash with the visuals very much. The tunes you’ll hear are detailed enough so that you know someone actually worked on them rather than some short sound bytes that oscillate over and over in each level. If you don’t like the songs available at the beginning, you can go to the Ollar Store and buy up to thirty-eight new ones.

Scribble Buddies
In the aspect of multiplayer, Scribblenauts is a bit shallow. You can create and share your own personal levels online via wi-fi, as well as play those created by others. Local multiplayer will have you doing the same, minus the uploading process. That’s all there is to it. It’s about as close as the game will probably get in terms of downloadable content, though, so players who run through the game might find the online to be their life-saving feature.

All Scribbled Out
At the end of the day, Scribblenauts is a multi-faceted game which can please players looking for something simple to jump into and out of during long bus rides, and those who need a new mainstay on their Nintendo DS. Though the flaws which mar Scribblenauts are as evident as the qualities which make it stand out, the overall package will prove fun for all fans of puzzle games and platformers like LittleBigPlanet. That in mind, it’s obvious why Scribblenauts is a must-buy for any DS owner searching for the next big hit.