The Xbox Live Arcade has proven time and again to be both a depot of quality experiences, and a landfill for gaming’s trash. You may wonder, then, if Shadow Complex is one of the worthwhile titles. The answer to that is tricky; if you’re a fan of the Metroid series, you’ll love Shadow Complex, but if you’re looking for a more straightforward action game, you’ve come to the wrong place.

Epic and Chair Entertainment, the developers of Shadow Complex, have been known to brag about their love for the Metroid series, as if that earns them some prestige. Unfortunately, their fervent touting of the Nintendo franchise has made painfully clear how derivative their game is of it. In fact, after some time playing the game, you may begin to think that the only difference between the main protagonist and Samus is their sex.

A complex… of shadows! Or something…
The game follows Jason Flemming, a man who, while on a date, accidentally discovers the secret base of a powerful organization bent on ruling the world. Believing that the two are spies, the organization captures his girlfriend, and Jason proceeds on a quest to save her. As you can probably guess already, the story is about as deep as a puddle of water in the desert, so don’t expect to be clapping when the credits roll.

More like ‘Super Shadow Metroid Complex’
The gameplay consists of… well, everything from Metroid and Super Metroid. You’ll be navigating a maze-like military base on a two-dimensional plane. While advancing through the game, you’ll find yourself acquiring upgrades, rather than new abilities. As opposed to eventually being able to fly, you’ll gain boots with boosters that allow you to double and triple jump.

Finding your way around the base can be a drag, as you’ll constantly be referring to your map at least once or twice every couple of rooms just to be sure you’re headed the right way. Because you’ll have to backtrack a lot, routes become even more complex as you learn new abilities that let you take different paths. Most of the alternate paths you’ll find, though, won’t take you where you need to go.

When you’re not going the wrong way (and checking your map again and again) you’ll be caught in the heat of battle. At first, gunfights are pretty difficult, mostly because you’re armed with a pistol while the enemy has automatic rifles and explosives. As you continue through the game, you’ll unlock new weapons and upgrade your armor, which will change your play style completely from ducking behind cover and firing off a few rounds to running into the bullets and punching enemies out of your way.

The gunplay can range from intuitive to annoying. When in a gunfight with enemies on the same plane as you, you can just fire and the auto-aim will clean them up pretty nicely. When shooting at enemies off in the distance, the same applies, so long as you tilt the stick a bit in their direction. Unfortunately, when it comes to battling with enemies both on the same plane as you and off in the distance, the auto-aim seems to just up and quit on you, leaving you to aim manually, which can be a little tricky. 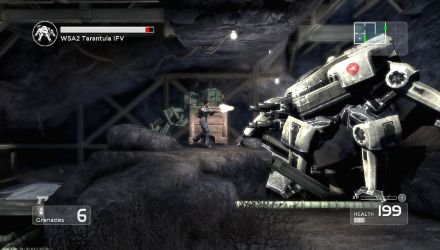 Most of the time, you’ll find that fighting the ordinary grunts can be more overwhelming than fighting a boss, too. Usually boss battles boil down to you tossing grenades until the big robot falls and lets you move on. There’s a bit of variety, like when you have to flood a huge chamber in order to defeat a giant walking tank while it launches missiles at you, but for the most part you’ll breeze through bosses with ease.

A sight for poor eyes
Shadow Complex isn’t the best looking of games. That said, it’s probably the best-looking Arcade game in the technical aspect. There are some graphical glitches, though. Sometimes you can stand half in a wall and half out of it, and enemies will stick to surfaces once they die. Once, while playing, I killed an enemy with a grenade and laughed as he hung by his ankle from the ceiling ridiculously. Considering how infrequently things like that do happen, though, you’ll definitely be able to overlook the goofy anomalies that may occur.

I think he’s drowning!
There are a few audio glitches to be heard too. When you come up for air after swimming, Jason will gasp and breathe hard, but there were times when I’d come up for air quickly and then dive back down, and Jason would still be gasping and breathing hard while submerged completely in the water. Aside from the glitches, though, the sound isn’t much to get excited about. You probably couldn’t recognize a song from the soundtrack if you listened to it right after finishing the game.

My shadow’s bigger than yours
In terms of multiplayer, Shadow Complex has its Proving Grounds mode. Proving Grounds is basically the game’s time trial mode, where you’re given specific skills to complete a challenge as quickly as you can. This can be a ton of fun and really addicting, as you’ll find yourself jumping immediately back into the challenge after dying from the smallest of errors.

You can view your score and time for both the game’s Campaign and Proving Grounds modes on Xbox Live. There you can compare your score with that of your friends, the other profiles on your system, and everyone on Xbox Live. It’s definitely a nice touch which will have you replaying the game competitively over and over just to see your name at the top of the screen.

Buy, Try, or Avoid?
Shadow Complex is by no means an incredibly remarkable game, but considering that it’s an Xbox Live Arcade game and comes at such a small cost, it’s one that you should definitely give a try before you buy. While Metroid fans may feel right at home with all of the backtracking, hidden objects, and maze-like design, newcomers to this type of game may struggle to find any reason to keep playing. Give it a try and see how you feel.