I’m not entirely sure why, but it’s a weird fit seeing Splinter Cell listed among the small number of games available for Nintendo’s 3DS. Probably because it just doesn’t really strike me as a title that would get the best out of the system’s features, in the way that the others have.

Still, it’s a run of games that I’ve got a lot of fondness for, preferring it over the silly nature of Kojima’s convolution in the Metal Gear Series. With that in mind, I had no qualms about putting myself back in the shoes of Ubisoft’s favourite super-spy, just to let you good people know whether it’s a title worth buying into or not.

The art of chaos

Bruce Morganholt is something of a computer genius. Having been working hard on deciphering the works of Philip Masse (a dangerously intelligent man who was taken out by Sam in the first game), good old Bruce finds himself kidnapped, and placed at the centre of an information tussle between most of the major Eastern countries. Sam, as always, is sent in to rescue the genius and find out exactly what the various terrorist factions are after.

Sound familiar? Splinter Cell 3D, for those that don’t know, is actually a remake of the third game in the series, Chaos Theory. Released on Xbox, PS2 and PC back in March 2005, the story remains pretty much untouched in this version.

It’s the type of story you’ve come to expect from Splinter Cell since the first game, full of political tension and intrigue. For some, it might just be told a little too dryly. Fear not, as the writing is excellent, just as it was back in 2005, straddling the fine line between fiction and authenticity pretty darn well.

Fisher, you sneaky fecker!
As this is a remake of Chaos Theory, you’ll find that most (I’ll touch on this later) of the major gameplay innovations from Conviction (and to a lesser extent, Double Agent) are gone. This means that we’re back to having meters to indicate Fisher’s visibility to others and the sound he makes, rather than the more subtle implementations that we’ve become accustomed to over the past two iterations. Going back to this system at first makes Splinter Cell 3D feel a tad outdated at times, as you’ll spend a lot of time watching two bars instead of the action on the screen. In truth, it works solidly enough; however, it could be a problematic adjustment if you’ve never played the older games before.

The complex controls also play their part in making the game difficult to pick up, at least initially. Without a second analogue stick, the camera control is mapped to the face buttons, and as PSP fans will tell you, this is never ideal. It’s functional enough though, and is made a little easier thanks to the centring feature, activated by double-tapping the ‘X’ button. I’ve seen some games on the system make good use of the touchscreen to manage the camera, and that would have been a nice option as an alternative control scheme, but you do get used to what you’ve been given over time.

Thankfully, the implemented use of the touchscreen works better than I expected. As with other 3DS games, it makes up for reserving nearly all of the physical buttons for camera control by adding additional buttons on the touchscreen. Need to whip out a gun? No problem; tap your thumb on the icon for the type of gun you want to utilise, and you’ll be in aiming mode. Want to use equipment? Touch the relevant icon. Want to access your tactical map? It’s a simple tap away. This I like. 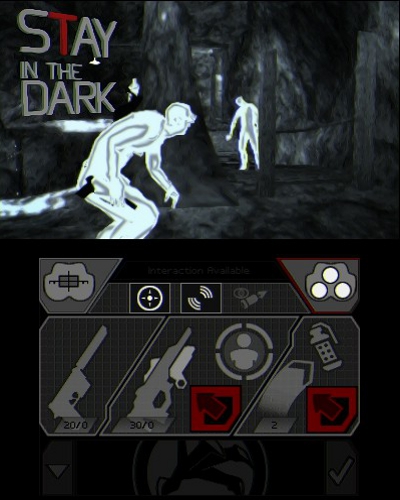 The more complicated context menus are also managed on the bottom of the touchscreen. If you stand in a spot where you have several options open to you, such as the different ways in which to open a door (believe me, there’s more than you’d think!), the options are listed in a box in the bottom screen. You can then scroll to the option you want, and hit the tick button on the right to activate. Like with other aspects of the control scheme, it can be tricky to pick up at first.

That said, despite the bitching about the controls I’ve read on the interwebs, as long as you stick with the game past the opening few chapters, it will all click into place. At first I was waddling around like a duck; by the end I was slinking in and out of shadows, and snapping necks like the pro that Fisher is portrayed. When it does suddenly click, you’ll find a decent showing of what the classic Splinter Cell formula does well, right in the palm of your hand.

This means that if you’ve played a Splinter Cell game before, then you’ll already know what to expect from the rest of it. You get dropped quietly into a mission with numerous objectives, and you need to sneak around in the shadows while snapping necks, using gadgets, rescuing colleagues and hacking for information, all to stop the terrorist threat. Stealth isn’t so much an important factor, as it is a vital one. Again, this is old school Splinter Cell, and thus far less forgiving when you get spotted than Conviction was. That’s a strength too, not a downside; there’s great satisfaction to be had from getting through the areas by being practically invisible.

Of course, you can’t shrink a game like Chaos Theory down to the 3DS and not expect to make some concessions. The obvious and fully expected omission is the excellent multiplayer, which would have surely been a headache to implement. Other missing components include custom loadouts and the ability to save anywhere at anytime.

While I can understand the removal of the anytime save, the replacement is a bit cumbersome, and if I’m honest, a pain in the arse. Saving is now managed by locating the huge floating Third Echelon logos and manually actioning the save. It not only looks ugly and takes you out of the moment a little, but it breaks up the flow somewhat too. Why saves couldn’t have been implemented as an auto-checkpoint is beyond me.

The biggest concession is that, sadly, the excellent A.I. we’ve come to know and love has taken a bit of a hit in the transition. While it in no way makes for a bad game, the NPCs feel more like they’ve been drafted in from a bog-standard stealth game, rather than a typical Splinter Cell game. As long as you’re swift and silent in your approach, you’ll find them easier to tackle than you would in other iterations. 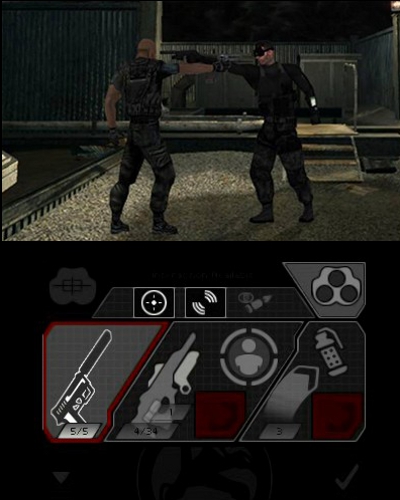 Grabbing your gun is but a touchscreen press away!

Three green lights…
At first, second, and third glance, Splinter Cell 3D looks great on the 3DS’s little screen for what is, unsurprisingly, a very dark game. It certainly took me by surprise with how good it looked, at first. The graphics do deteriorate if you get up close, however, which usually only happens when grabbing an unsuspecting guard and dragging them into a corner. Still, as most of the game is played at a distance, it runs pretty smoothly; at times you could almost be fooled into thinking you’re playing one of the original Xbox titles. Almost.

Remember when I said that most of the new innovations from Conviction didn’t make it in? Well, one did, and that is how hints and objectives appear on the walls or as part of the scenery in certain areas. It looks nice without changing the way the game is played, but it at least brings it visually in-line to what we’ve seen since Chaos Theory was last released.

I do have one major complaint; the 3D effect is pretty negligible. Really, for the most part I struggled to see any 3D effect at all when switching the slider from ‘off’ to ‘full’. In movie comparison terms, you’re talking Clash of the Titans 3D rather than Avatar 3D. A shame, and while some might argue that there’s not enough coming at you in the game to make it worthwhile, a little more depth than what you get would have made it seem that bit more impressive. 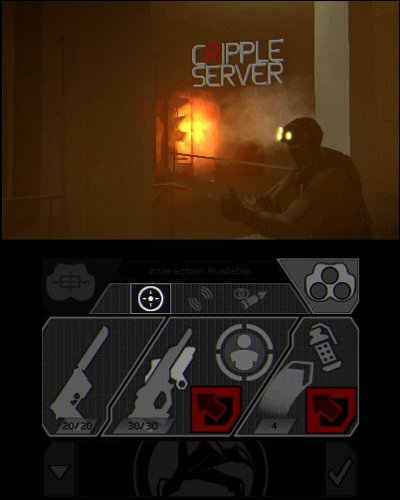 Silence is golden…
The game sounds excellent, with full dialogue from the original cast, including Fisher’s Michael Ironside. Before each mission, you’ll get the opinions and briefings from several of your colleagues, and they’ll often feed you intel mid-game as you complete objectives. The voice acting has always been decent in this series, and yes, it’s as good as when it was first released.

Of course, most of the game will be practically silent as you sneak your way around the locales, but that doesn’t stop sound being an important and interactive element. Everyone knows you can do a whistle to distract the guards, however you can also use sound to mask your movement, with things like thunder or gunfire making for excellent audible cover. It’s always been a really sweet system that makes you feel something of a ninja.

Keep on’ Fishering…
Splinter Cell 3D is actually pretty decent when taken on face value, and is probably the best portable representation of the series we’ve seen. I’ll be honest; I was expecting a complete car-wreck of a port, and what I got handled pretty damn effectively. While it’s definitely diluted compared to when Chaos Theory originally debuted, it has not been dumbed down all that much in the process.

If you like classic Splinter Cell and you want to play it on the move, then this game is definitely for you, although you need to make sure you allow time to get used to the control scheme. Do that, and you’ll find an able game that manages to keep most of the tension and enjoyment of the original title, but truth be told it won’t offer many surprises. A solid port on a smaller scale, nothing more.