I’ve declared my love for Street Fighter a few times on here since we started, not least when I reviewed Super Street Fighter IV last year. My entire youth was spent playing Street Fighter games in some capacity, and to this day the series still means a lot to me and my life with games.

Now, Capcom have decided to see out their fourth iteration of their seminal fighter by releasing a DLC pack that will update your copy of Super Street Fighter IV, making it the definitive and final version that they’ll release. Available now on Xbox Live & PSN for 1200MP and £11.99 respectively, and soon on retail disk; is it worth your cash?

If you’ve opted to get the update via DLC, once the download is complete and you’ve booted up your copy of Super Street Fighter IV, the game will check for the new version and tell you all you need to know before you start. You should notice that on the right of the main menu screen, there is a little gold icon that tells you whether you’re on the updated version or not. A nice (but expected) feature here is that you can then switch between the standard and Arcade Edition of Super Street Fighter IV in the options. That aside, there’s not all that much that’s aesthetically or audibly different that it’ll do to your game.

The first part of the DLC to mention; the one that’s most important to gameplay and the one people will be most interested in, are the four new characters. This update brings in Evil Ryu, twins Yun & Yang, and a new villain in Oni. As with the additions made to the roster between SFIV and SSFIV, the new characters intros and storylines aren’t as polished as those included from the offset, featuring only slightly animated slide-shows and not full motion movies. Shame, because why Ryu becomes evil is never really explained, and I would have loved some more background information on Oni, as I only know that he’s an out-of-control Akuma by doing some research on the interwebs. 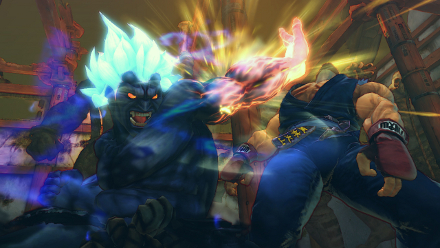 Oni? What a big blue Blanka...

Evil Ryu and Oni are both slight variations on the usual Ryu/Ken play-style, and even I, as an almost devout Ryu fan, sarcastically exclaimed ‘great, more Ryu variations…’ There are, however, some subtle differences. Evil Ryu is a bit of a mixture between Ryu and Akuma, featuring nearly all Ryu’s signature moves but with Akuma’s raw power. His likeness to everyone’s favourite redhead goes further, as he incorporates a couple of the big guy’s moves, such as his teleport. Blanka lookalike, Oni, or ‘Evil Incarnate’ as he calls himself in his intro, is pretty much more of the same but with some lightning flavoured moves and projectiles thrown in for good measure. Once again, Oni falls in line with the Akuma/Gouken power bracket, and as such, these guys have some pretty brutal Ultra Combos that never get old to watch.

The other two characters, Yun & Yang, have been drafted in from Street Fighter III and these young twins feel a bit like the bastard love-children of Chun-Li and Cammie. As Street Fighter III was one of the games in the series I didn’t spend too much time on, I can’t really recall how true they are to their original move sets, but they appear nimble, easy to get to grips with and are pretty damn useful. They are fairly similar to each other for most part, in terms of general handling and speed at least, though their moves do differ between them more than some of the other cookie cutter characters. Out of the two, I found Yang to be just about the more effective fighter, simply because of the range and height of his most useful attacks. What is definitely true, is that these two are where you’ll be looking for something fresher from this DLC offering.

Aside from some general balancing tweaks here and there, the other additions that come with the Arcade Edition are entirely community based. Though, as you’d expect, all the standard features have been extended to make use of the new roster, including some additional titles and icons used to further create some individuality to your online persona.

The worth of what else makes up the Arcade Edition will depend entirely on how much you play online and how into the community side of things you are. With the exception of being able to name your Endless Battle lobby, pretty much all the touted features are subtle usability tweaks for the replay/upload system. So, for example, players can now view replays directly from the game’s leaderboards, and they’ve added an Elite Channel to the billing so that you can get straight to the replays of those higher ranked players. In the My Channel section, when the host plays the clips, the guests that are viewing are able now to save those replays directly to their own lists. While these are nice, user-friendly changes, none of this is really anything that’s going to alter the player’s experience all that drastically. 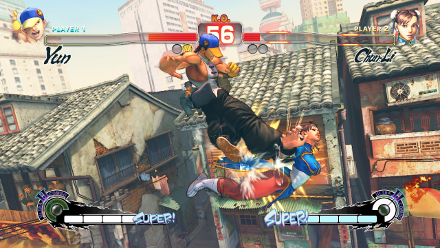 Yun and Yang. Crap pun much?

In fact, the closest thing to an entirely new feature is that you can now follow up to five players’ replay output so that you can keep a eye on their progress. Personally, while I recognise that such things improve the community aspect and would be brilliant features in any game, as expensive DLC they don’t really change things up enough from the standard edition.

I can’t help but feel that if I’d paid the money for this, I would be feeling a little short-changed right about now. You’re looking at a considerable price for some balancing tweaks that could have been done via a title update, features that don’t affect the core gameplay and four new fighters; two of which are rehashes on a classic formula that is repeated too much in the game as it is. At a cheaper price, possibly around 600-800MP, you’d be looking at a far more attractive proposition, but as it stands I’m struggling to find valid reasons to spunk this much money on the Arcade Edition at this time.

If however, you haven’t yet sampled Street Fighter IV in any capacity, then (after jabbing yourself in the eye as punishment) I highly recommend picking up a copy of the full retail version as soon as you can, as you’ll get the most value from the entire experience. For everyone else, this DLC is only really worth it if you’re the most hardcore of fans.