Before I start I have a confession; I have never played a King’s Quest game. I’ve done a little bit of research before playing this latest game but I have never picked up one of the classic games and unfortunately, this new episode isn’t that good.

For those of you that don’t know, A Silver Lining is an unofficial fan made sequel to the King’s Quest series of games made by Sierra back in olden times. After a tumultuous development (which has seen two separate cease and desist orders from the varying copyright holders), it’s finally being released in five episodes.

A plot about a plot?

The story of the second episode starts up at exactly the end of the first. Graham, the jaunty hat wearing main character, has set out to find out how to break a spell that was cast on his children in the first episode. You start the second with a list of things to find and some vague clues about where to go. The story is a major part of the game so I won’t spoil it for you but it isn’t exactly the best ever. Some of the writing is especially lacklustre for a game that revolves around telling a story, with a load of cringe worthy dialogue lines even before the voice actor touches them. It’s pretty hard to take a tenuous story seriously when almost every line feels like it was written by someone who doesn’t quite get how to write stories. It also fails to introduce you to any important concepts or world information from either the previous episode or from the world in general. 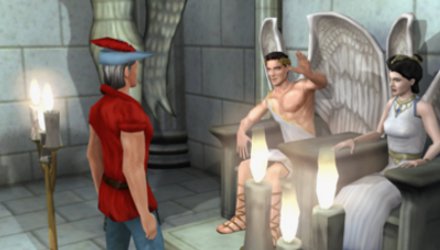 Ah, good time for some gameplay
Of course, this is actually a game so you can’t spend the entire thing sat back watching video. The first episode has about twenty minutes of gameplay to an hour or so of narration and cut-scenes. I really disliked this as it was really, really boring due in part to the terrible writing. The second episode has actually improved the ratio to something more closely resembling a game. It plays as a standard adventure game, based around finding items and then using them in the correct place. There isn’t any combining of items to make new and bizarre items like in The Secret of Monkey island and there are only three verbs you can use (look, interact and talk). It makes it simple but the problem is that it eventually turns into a simple case of pickup everything and try it on every puzzle. This is the style that Lucasarts games kicked the shit out of when they were released and under no circumstances should we go back to it. The game is pretty cool in that it has responses for using the wrong item which could potentially be funny but as mentioned before, the writing really lets it down. The game also has an issue in telling you what to do, unlike other games, it tells you your overall goal and that’s it, with very few clues about where to go and what to look for.

Visual silver? Nope
The game gets worse. The graphics have to be some of the worst I have seen in the past few years. It looks almost exactly like the late ‘90’s 3D graphics of the last actual King’s Quest game, which for 2010 is not very good. Textures look flat, there’s a lack of effects and faces just look wrong. Compared with many other adventure games, you aren’t coming here for the visuals. 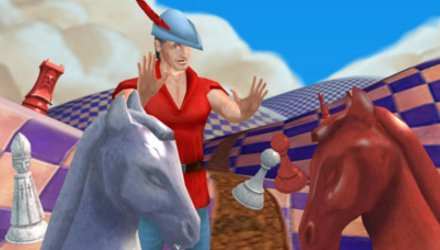 Seriously, what is going on in this picture?

Audio silver? Nope again
Silver Lining’s audio is slightly better due mainly to its haunting music. All of the music tracks are beautiful and well worth a listen. It sounds like they got a very talented composer to work on it. Unfortunately, the voice acting is far less impressive. It sounds a little like amateur hour, which is understandable for a fan project. What is less understandable is just how annoying some of the actors are. The genie’s voice feels like nails on chalkboard while the narrator is nothing but annoying throughout; her little self plug is rather irritating.

Every cloud…
Overall, I cannot recommend this game to anyone except possibly insanely die hard King’s Quest fans. The only “silver lining” I could find in the game is the music, the rest is just a simple “find items to solve puzzles” adventure done in subpar graphics, voice acting and writing. Even for free, don’t play it.