Timeshift had something of a prolonged development schedule, after many delays and presumed cancellations. When it eventually hit shelves it was drastically different to the original time-manipulating vision of developer Saber Interactive. Deciding that graphically and atmospherically in its then current state the game could not compete with the likes of Gears of War, Saber went back to the drawing board and made several notable changes. Gone was the archetypal and never-fazed protagonist Michael Swift, in his place an anonymous mute aimed at making the player feel more involved in the action. The story was also heavily modified, as the game took a far darker tone than that of its previous direction. History tells us that games that go through these troublesome development cycles and false starts don’t tend to perform well (although Resident Evil 4 managed it ok), but have Saber managed to rewrite history and put out something worth playing?

A timeless story…
Timeshift is set in the near future when scientists have come close to creating a fully functional time-machine, however a side project has taken precedent; bio-suits that allow the manipulation of time. Two are produced; however the head of the project Dr Aiden Krone steals the original alpha suit and travels back in time, creating an alternative timeline where he is the ruler of a totalitarian world. Our faceless hero (namely you) takes the improved beta suit and travels back to 1939 in the alternative timeline, and must use the powers of the suit to help a rebel outfit in their efforts to take down Krone.

Sounds a decent plot doesn’t it? It’s a shame that’s about where it ends. Unfortunately none of the story elements are told very well in-game, and neither are the events that tie the acts together. Flashbacks in between acts are handled in short, confusing cut-scenes featuring characters you don’t know and have absolutely no empathy for. One such banal character appears to be the protagonist’s girlfriend, but with limited instances of their relationship to attach to, it becomes hard to give two-hoots about someone who doesn’t even appear in gameplay. Combine that with such an anti-climatic ending, the plot here is hard to get excited about. Luckily Timeshift makes up for its narrative shortfalls with a great atmosphere and demonstrates the ‘tyrannical rule’ scenario almost as well as Half-Life 2.

‘If I could turn back time… Oh wait! I can!’
As you have probably guessed by now, all of Timeshift’s combat relies heavily on the manipulation of time (although if like me you have picked this up on the cheap long after release date, don’t be expecting ‘Braid with guns’). You have three main powers at your disposal: The first being the ability to slow time while you maintain regular speed, giving you a good tactical advantage over your enemies. Next up is pause, which allows you to take weapons out of enemy’s hands. There are some cool effects with this, such as getting a head shot while paused means the effects aren’t shown until time moves forward again, resulting in a gorgeous spray of blood. Lastly there is rewind which helps with a lot of the puzzle elements, and allows you to send grenades back to enemies if they have stuck you with one. Each power has its own time limit (displayed in the HUD), meaning that you have to pick and choose what to use when. Luckily the ‘suit’ is smart enough to read what you need in a given situation, so a quick tap of the left bumper will more often than not set off the mode you need, if not it can easily be manually overridden.

While all of the instances in which you use your powers work well, they are very basic and you get the feeling that they could have been used to even better effect. Making the game a lot more puzzle heavy or including some time-based stealth elements or a power-levelling system would have really helped make the difference in turning this from a gimmicky straight forward shooter to a truly classy title.

The combat itself is a lot of fun, playing somewhere in between F.E.A.R. and Half-Life 2, and let’s face it; that is a big compliment. Controls are solid and robust, and you never die feeling that that you have been let down by finicky game mechanics. The weaponry on offer is mainly futuristic takes on standard weapons, with an assault rifle, a shotgun (named the ‘scattergun’) etc, with the more interesting ones being Sabers version of the torque bow, and the ‘Surge gun’, which is the most powerful weapon in the game. For most part the enemies are your generic soldier types; some armoured, some not, but the further you get in to the game you come across deadlier classes. Some of the enemies have basic time-shifting abilities like you, seemingly sprinting at inhuman speeds, others can appear and disappear. None of these really change up the pace of the game however, and each is as easy to defeat as the last.

The linear level design works pretty well and the layout is generally pleasing, with lots of areas that suit the combat delightfully. Again, just like Half-Life 2 the gameplay is broken up nicely by vehicular sections, traversing the terrain on a quad or manning a turret on a flying fortress. 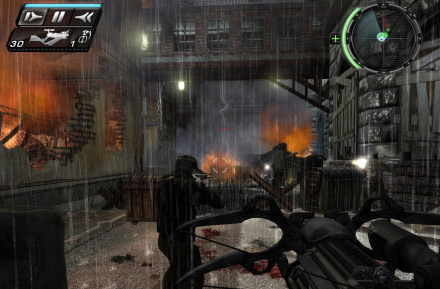 Will you look at the time?!
Timeshift managed to surprise me visually; there are moments of true brilliance here, but the game isn’t that consistently good-looking throughout the entire experience. It definitely doesn’t hold up to the bar of ‘Gears of War’ like Saber had hoped. The opening in particular gives off an instant wow factor, with vibrant rain effects made only cooler when you slow down time. Manoeuvring around the battlefield through motionless raindrops and spurts of blood is one of the main moments that will stick with me when I think back to this title. Other cool features such as exploding body parts and destructible cover help make the game that little bit more engrossing, but it’s just a shame that the high level of visual impact just doesn’t stay the course. In particular the character models do a job but could have been a lot better, they are flat, dull and feel lifeless.

Tick, tick, tick, tick BOOM!
The sound quality generally is of a fairly high standard. The futuristic weapons all pack a decent and believable punch, and explosions are all suitably nice and loud. I found the time-manipulation sound effects a nice and subtle feature, you don’t really notice it in the heat of battle, but you’d notice if it was taken away. Another nice effect with this is when receiving instructions or listening to enemy chatter at a point you need to slow down, the vocals become slow and drawn out, and you can tell they’ve really taken into account everything that time would effect. The soundtrack is definitely fitting with the moody nature of the game, not outstanding or memorable, but just about worthy of the overall experience. I would just like to make a special mention to the voice acting, although clichéd and without any big names on the bill, those employed by Saber have done an admirable job.

What’s a little time between friends?
Unfortunately as this is a bit of a retrospective review born out of bargain hunting, I have been struggling to get into an online match on this game. So with that in mind, I can at least tell you what you can expect, but I doubt very much you will get very far with this aspect of the game. Included are your standard deathmatch modes, attack and defend, and CTF, along with some variations on those. The variations mainly come in to effect because Saber managed to add an element of time control in there with the use of grenades that slow everything down in their blast radius. Looking at other reviews on the web there are a lot of good comments about this multiplayer component, however personally this wouldn’t be the type of game I’d turn to if I was in need of some fragging action.

Time to wrap this up.
Timeshift is a good, competent shooter with fluid and engaging combat and a cracking atmosphere. Unfortunately it’s stifled by a poorly communicated story and a feeling that there could have been a lot more work done with the time-shifting abilities, especially in the puzzle department. Despite not realising its true potential, it’s an exciting adventure and is certainly worth most people’s time and money, though maybe not at full price. Give it a rent, pick it up on the cheap, or try the demo on Xbox Live and PSN and decide from there.