Being a child of the 80’s, I was a fan of many of the big cartoon franchises around at the time. Ghostbusters, Thundercats, you name it, I probably loved it, joined the fan-club and owned the bedding for it. One of my other favourites was definitely the Teenage Mutant Ninja Turtles (or Hero Turtles as it was known in the UK). There have been a whole wealth of Turtles games down the years, some brilliant, some awful. Consider my delight in the summer of 2007 when I discovered that the franchise was not only due a comeback to the big screen in an animated sequel to the live-action movies, but also to our consoles in the accompanying game. Did it buck the trend of awful movie tie-ins? In a word? No. In two words? Hell no. Although there is that little matter of an easy 1000 gamer points…

It’s one shell of a story.
Loosely following the basic structure of the movie (which I thoroughly enjoyed), TMNT is told from the point of view of our four heroes reminiscing over their latest adventure. Between them and Splinter, they tell of how Leonardo returns from an extended soul-searching exile in the jungles of South America to find that his brother’s lives have fallen into disarray. In the early part of the game you follow each Turtle in solitary missions bearing slight relation to how they are now living their lives; Raph is moonlighting as the ‘Nightwatcher’, Donnie has started offering technical support to PC users over the phone, and Mikey has become a children’s entertainer. A multi-millionaire CEO called Winters is behind the re-emergence of the Foot Clan and the appearance of monsters roaming the city.

Here is where TMNT breaks one of my golden movie tie-in rules by not sticking to the source material and taking the story in its own direction, with only few key plot points tying in with the movie. The reasons for being in the various locations are not well explained, and leads to the telling of a pretty disjointed storyline. The pacing in particular is dire, and you’ll be pretty much two thirds of the way through the game before you even get remotely into anything that resembles the plot from the movie. You can forgive this in games sometimes, providing that the rest of the game makes up for it, and unfortunately for Ubisoft, TMNT is certainly not in that bracket.

I don’t love being a turtle…
To be honest, TMNT has so many flaws that I’m struggling to even decide where to begin the slating. I’m probably best to start with the fact that they have tried to use the Prince of Persia formula as a template to some degree, and at first glance it might not seem that bad an idea. In practice and this poorly implemented however, it’s the worst idea they could have had. While taking the princes range of moves to navigate the levels, it’s a huge shame they haven’t copied any of his finesse along with it. Movements are clunky, animations are weak and the levels themselves are very badly designed. This is made even worse by the fact that the fixed camera is of little help. Platforming and combat are kept at arm’s length, with combat clearly separated taking place in open areas, announced by the word ‘FIGHT’ scrolling across the screen. This system can work if the combat is a pleasurable experience, and guess what? It isn’t.

With main attacks mapped to one button, and only a stun attack another, you can probably guess that the combat is incredibly simple. The very basic beat ‘em up approach lacks any kind of combo or upgrade system, and is deeply unsatisfying. I am not exaggerating when I say that you can complete all the combat areas in this game by mashing the slash button. There is simply no incentive to try anything else unless you can count pure boredom as an incentive. When adventuring alone your turtle has a meter that builds up and can allow him to unleash a slow-mo barrage of attacks. When levels are meant to feature all of the turtles, you begin as one character and by acting ‘all ninja-like’ can earn the others one at a time.

Once a new Turtle is added to your party, rather than having them fight alongside you, you can switch to them at any time. Should you stop being ‘all ninja-like’ and mess up, one of them will disappear. You can also do ‘family moves’ by either holding the relevant button or pressing it as you are in the air. Alongside this the turtles each have an individual special move, which may as well be labelled as ‘press this button to progress’. Leo can teleport through bars that glow blue, Raph can scale surfaces that glow red, Mikey can use his nun-chucks to glide over large gaps, and Donnie can pole-vault. None of these really act as the puzzles as they are portrayed as and add nothing to the game apart from minor annoyance. After finishing a level, if you achieve an A ranking (dependant on a number of differentials on each stage) you can unlock a speed challenge, however I doubt that replaying the game will be a part of many people’s plans after experiencing this the first time around. 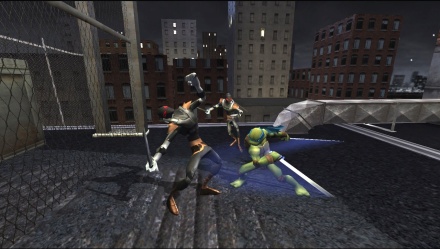 Being a turtle has never been so dull.

Turtely awful presentation (and pun)…
TMNT is easily one of the worst looking games I’ve ever encountered on this or even the last generation of consoles. Character models are ugly, environments are dreary, and animations are appalling. Worst of all the game suffers from severe frame-rate issues and is incredibly choppy. This pitiable frame-rate doesn’t just affect gameplay as in the few moments the game uses footage from the movie, an almost slideshow effect appears there too.

Cowabunga dudes!
It’s amazing to me that in a game that has got so much wrong can at least get something right somewhere. The voice acting in the game is excellent in spite of a woeful script, and that is mainly down to the fact that the top four characters are all voiced by their movie counterparts. That is until they keep repeating the same phrases over and over in gameplay, but every other piece of dialogue is well produced. There are some technical issues here, occasionally characters would repeat themselves immediately after beginning to speak, giving an awful echo effect. The other characters that appear (which oddly don’t include April or Casey, despite playing a major part in the movie) are voiced by sound-a-likes who, to be fair, do a fine job of mimicking their superiors from the movie. Again, typical of the game, the rest of the audio effects fail to excite and drags one of the game’s few plus points back down again.

Shouldn’t there be four of us?!
This is usually around the point of the review we talk about the multiplayer aspect of the game in question. TMNT has no multiplayer; neither local nor online. So why am I bringing this up exactly? Namely because if I was asked to think of a classic popular franchise that would be absolutely perfect for a four player co-op experience, one of the answers somewhere near the top of my list would be Teenage Mutant Ninja Turtles. Now usually I like to review games for what they are, and not by the ideas of what I wanted them to be, but the omission of multiplayer in a game that features four main characters is completely beyond me. Hell, until recently the TMNT arcade game was still one of the most played XBLA games ever, something which many refer to as a perfect co-op game. Surely that proves my point?

This game belongs in the sewers.
I think this is the easiest ‘Avoid It’ award I’ll ever have to give. TMNT is short, ugly, devoid of fun, full of technical issues and has absolutely no replay value (I’m thankful!). Achievement hunters out there might find it a nice easy way to gain 1000 gamerscore points over the space of an afternoon (I’m ashamed to be in the 1000 club with this, at least I can blame it on journalistic integrity), but for everyone else, spend your money on anything but this.