The Winter Olympics are upon us. For many this is a time of excitement, anticipation and potential participation. For others, it is a time of realisation that something happens in the world of sport other than football. For gamers, it is a time to buy another tie-in game designed to make us feel like we are being healthy and participating in something international, or a time to give away more of our hard earned cash for something that makes us feel slightly cheated. How does the coming of the Winter Olympics and its inevitable game make me feel? Well, you will have to read on to find out.

Olympics? In the snow?
The Winter Olympics in game form consists of several events that you can play your way through, covering most of the disciplines featured at the real life Games. Events include various forms of skiing, snowboarding, bobsleigh and the like, speed skating, and ski jumping. Notably absent is the biathalon which featured in the 2006 Torino game tie-in, a personal favourite with its mix of cross country skiing and shooting. The game features no career mode, which I feel is a big vacuum; you basically select one or more events each time, and play them through, either as a Billy-no-mates, or as multiplayer. We also have the option to play ‘challenges’ which provides some fun and alternative amusement.

What? No button mashing?!
The disciplines that are on offer present different challenges in order to master, which does provide a good level of variety. For example, the Downhill is relatively simple in which to do well, yet very hard in which to excel. Your avatar is flung down the side of a mountain (ooh, is that where they got the event name from?) at breakneck speed, and it is up to you to steer him between the flags with your stick. Easy peasy. Well, yes, but I don’t think I have actually managed a clear run yet. The course does not look that challenging, yet despite knowing where the two really difficult gates are, I always miss them. A word of advice (from the person yet to complete a clear run) don’t try and steer through the gate you are approaching; aim for the next one.

While the Downhill focusses on your ability to concentrate and steer well at the correct moments, other events focus on your ability to press the right buttons at the right time, (ski jumping, for example) or for hand eye co-ordination (the aerials) and others rely on your nerve and ability to test your athlete to the limit, and to know when to back off (the luge and bobseigh events). This variety in skills required makes the game as a whole interesting; thankfully we are not reduced to button mashing that seems to have so long dogged the sports genre. As a woman, I have a distinct disadvantage when it comes to the need to mash buttons, as I have not had as much practice at the action required as my male counterparts. With this variety in skills needed comes a slight drawback. The events controls lack consistency; some you need to steer with the triggers, and others require the stick to steer, as an example. Whereas I appreciate the effort the developers put in in order to mix things up a bit to keep the interest, I see this as an annoyance. I play this game every few nights for about half an hour (usually in that handy time between ordering takeway and it being delivered) with my husband, and we can never remember all the controls so end up going through the tutorials for some of them again. I feel that we shouldn’t have to do this; we should know by now. I don’t think it is early onset dementia; I think it is a failing of the game design.

No time to look around, sorry.
Having said all that, I have to admit, the game looks very pretty. The background detail is rendered very well, and in some places looks like a real mountain view, if only you had the chance to admire it. However, the cynic in me says that they didn’t really need to try that hard. Once the template is created, there was little else in terms of effort apparently put in. I am refering here to the lack of imagination, and to the lack of variety. Each time you throw yourself down the mountainside, during the final approach to the finish line a balloon waits to take off. It really should have gone by now! I am mostly jesting, but there is not a great deal to otherwise say about the graphics.

Is that the inside of my own head that I can hear?
One nice inclusion that does warrant mentioning, and also applies to the sound, is certain atmospheric touches. When you are skiing really fast, and really well without crashing, you hear your adrenalin enhanced breathing within your helmet, which blocks out other sounds and ramps up the tension a little bit. Along with this your vision is impaired, as you enter a blurry tunnel-vision-esque state, which sounds naff, but is actually really quite cool. Then, of course, there is the obligatory canned crowd noise, where there is nothing wrong, but nothing exactly ground-breaking either. I appreciate the lack of bad synth/psuedo rock music that seems to dominate sports games. The Vancouver team have seemed to have steered largely clear of assaulting our ears with it. Either that or it is subtle enough that it hasn’t left an impression on me. Either way I appreciate it. 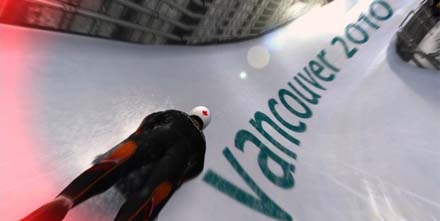 It’s much more fun with more than one.
Multiplayer. Yes. This is really the reason you would want to play this game. With the total lack of a career mode which would keep my attention for some time on my own, you’ll feel the multiplayer mode should be better developed. The multiplayer is essentially the same as the singleplayer, but with more players. My husband and I made a tactical error when buying this game; we had the choice between buying for the PS3 and the Xbox 360. Based on potential graphics quality we went with the PS3. We did not realise at the time that this meant that only one person could be logged in at any one time, and therefore only one person had any chance of receiving trophies, personal bests, etc.

At first we found this immensely infuriating, although as time goes by we realise this is actually less and less of an issue, as our careers as international skiiers are not stunted, as, hey, we don’t have careers. Hubby would normally sign in, and as compensation let me pick which country I wanted to play for. This is the depth of character creation. It inspires no national pride/identity as you play as a generic avatar, so I try to pick a different country each time. I end up playing with my husband’s username with a ‘1’ at the end, as I really can not be arsed to delete the default and type my own in each time; there is absolutely no incentive to do so. If we had gotten the Xbox version, we could at least both play as ourselves, but it wouldn’t go far enough to put back the soul that has been stripped out of what could otherwise be an awesome game. Online wise, the game is focused heavily on basic leader-boards, however there are head to head modes, that allow for four players to take part; this section is just as limited as it is offline.

Does it win gold?
As it is, the game is fun, but vastly limited. The inclusion of the challenges is a nice distraction, but really the fun is in playing, and beating the person you are married to/friends with/hate at slalom, jumping, etc… I feel this game doesn’t do enough to warrant the full price, but is worth buying at a discount price if you are into this type of experience, or want something to while away the time before your pizza arrives. It is ultimately a little bit lifeless, but still, I can’t say I don’t enjoy it. Nothing about it is wrong, or broken, but there is so much that should be in it that isn’t. With that, overall, I get the impression it was rushed out for the release date.