It has been quite a long time since the last ‘proper’ Worms game. Worms 2 was released all the way back in 1997 and Worms Armageddon was released in 1999 but there hasn’t been any shortage of spin offs between then and now for the hardcore fans of this crazy series. 2009 rolled around and saw the release of Worms 2 Armageddon on XBLA and now it’s the turn of the PS3 users to get their hands on this whacky war game.

Who needs plot when you have guns?
As this is a Worms game there isn’t really much plot to speak of but there isn’t any need for one and I certainly wasn’t expecting one. It’s pretty simple; your worms don’t like the other worms, so they attack each other in large groups and in some rather odd locations. Cue gratuitous violence and insane weaponry and you have the world of Worms. Even the campaign that has been slotted into it has no real plot and each mission only serves to get more difficult, not move along any sort of story.

Bombs away!
The single player campaign has thirty missions available to play through with each mission only being slightly different from the last, but most of them use the basic death match mode. Other missions will involve trying to reach an exit point in a limited amount of time with a restricted set of weapons and aids and also some that test your skills against a large army of enemy worms. On top of these thirty missions there are five additional that can be purchased as you progress through the levels.

You earn coins for completing each level of the campaign. These coins can be used to purchase a wide variety of items in the store including new maps, hats and even gravestones for your worms’ untimely deaths so they can conk out in style. Pretty much everything you buy in the store is purely for aesthetics and don’t provide too much of an awesome reward no matter how many points you have but it’s nice to have something additional to a new trophy.

The flow of the game initially seemed to be quite slow, allowing 60 seconds thinking time per round. This quickly decreased as the missions got harder and harder, leaving you with less worms, less time and sometimes less weaponry to dispatch them with. This was definitely preferable to me as a faster pace made it seem far more exciting than the slow and laborious task that it started out as. 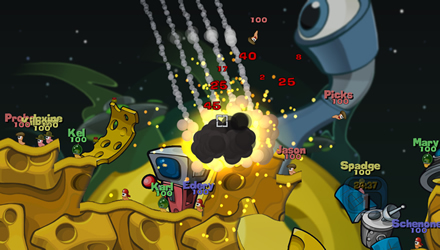 It’s Worm Warfare
The graphics of the game are very basic as you would expect from a PSN game but that certainly matches the gameplay and doesn’t hinder it in the slightest. Playing almost as a 2D side-scroller, Worms 2 Armageddon doesn’t really have all that much going on in the background but what is there is a lovely poster style backdrop that is really easy on the eyes. All the maps are very different in their setting from haunted houses to beach huts and even a few space levels thrown in for good measure.

Rootin’ tootin’ shootin’
One of the wittiest things about Worms 2 Armageddon is the phrases the worms come out with. You can assign languages and dialects to your worms in order to amuse yourself and other players with their witty battle cries and suicidal goodbyes. Among the voices to choose from are Movie Trailer, Kamikaze, Brummy & Redneck.

An actual soundtrack is not really present, instead providing an almost ‘elevator music’ feel to it which hinders the game slightly. A more upbeat and slightly more frantic soundtrack perhaps would have set a better pace, as everything just seemed to be a little bit too quiet aside from the Worms’ heckles at each other and screams of pain.

Is he gonna fire that thing? Oh, wait…
Online multiplayer I have found to be a little bit lag ridden which detracts from any real sense of urgency in the game. In-between turns there is several seconds loading time, interrupting the flow of the game you are in which is more than a little bit frustrating. Local multiplayer is also present, something which has me as it isn’t widely available now for many games. Playing locally allows you to play with up to four players at once, causing complete havoc on your television screen as sixteen worms battle it out to be the best.

Multiplayer both online and locally also encompasses the use of crates to gain advantage over the rival team. The crates available to you are health crates to top you up in dire situations, utility crates to help you make your way around the landscape with ease and the self explanatory weapon crates, full to the brim with goodies to give you that much needed push in the direction of winning. These crates are deposited around the war zone when things aren’t moving along too quickly, or there isn’t enough carnage going on. The more crates that are dropped, the more mayhem is splayed across your screen. 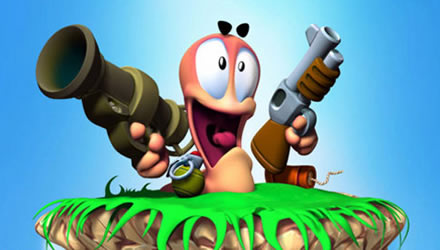 Why use just one, when you can use them all?

Armageddon it?
Worms 2 Armageddon is a fun game even if it was quite short lived and had some serious frustration factors to it as the missions went along. That being said, a longer campaign would have perhaps dragged the whole thing out but there will be no shortage of crazy online games for players to compete in and it will be good fun with a few friends.