Pirates of the Caribbean has a lot to answer for. As soon as you mention anything about pirates dealing with the supernatural, it’s swiftly drowned out by people moaning about the second, third and fourth films. Piranha Bytes, makers of the Gothic games and Risen, have jumped into this area with a sequel to Risen. As it turns out, it’s actually a pretty good take on the whole ‘supernatural pirates’ theme.

In Risen 2: Dark Waters, you play as The Nameless Hero who is trying to recover after the events of the first game by drowning himself in bottle after bottle of rum. However, the reappearance of a friend from the first game sends you off on a quest to go hunt down the big supernatural baddy Mara, who is raising the titans of the earth to bring about the end days. It begins with you being kicked out of the Inquisition so you can go undercover. The plot later on becomes less focused, allowing you to attack multiple objectives at once, which gives you a nice choice of what to tackle.

I actually really enjoyed the plot (something vital for a singleplayer RPG) and was caught up in it, laughing at some of the lines and loving some of the set pieces. However, it isn’t top of the range; some of the writing can be a little off, especially with some of the very English swearing patterns.

The game writing is good for another reason: it feels like a game about pirates rather than just a fantasy RPG with some parrots stuck on top. You’ll spend your time taking part in drinking contests, digging for treasure, robbing tombs and fighting swashbuckling sword fights in every situation possible.

I also enjoyed many of the characters. When you start to build up a crew, the character interaction is very Mass Effect-esque, with each one having their own take on the current events and locations as well as giving you pointers if you need them. These are told rather well, as opposed to them simply telling you your quest objectives. 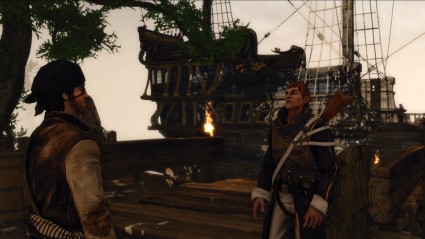 Now, what this strange motion you make with your foot? A kick you say?
The meat of the game is focused on you adventuring around several expansive areas completing quests in order to advance the game. It actually feels very much like a singleplayer MMO in terms of its controls scheme. As said before, Risen 2 has shed the fantasy of the original, and so the areas you’ll be traipsing around range from colonial style forts and towns to pirate hideaways and ancient native temples.

You don’t choose a class when you start; instead you earn Glory that can be spent to upgrade individual stats such as Cunning or skill with blades. This leads to a rather free form approach to upgrading, and allows you to upgrade exactly how you want. Personally, I have no truck with voodoo so I didn’t put a single point into it. Luckily I didn’t feel like I needed it at any point during the game. In contrast though, skills such as Cunning seemed to me to always provide the easiest way to any objective.

In addition to your stats you also need to gain talents. They are bought from skill trainers and range from things such as learning how to kick (a skill most master in early childhood but not for our hero), to more complex feats such as improving your voodoo or mastering critical strikes and the like. Each skill is vital for some purpose and it makes sense to buy them all as fast as possible; sword damage doesn’t matter if you can’t power attack with it. Early in the game, you really struggle to find enough cash to pay for many of these talents.

In fact, the early game is ridiculously hard. It was in fact a little off-putting and almost turned me the entire game. Part of this comes from a terrible combat system. It feels incredibly floaty when you’re fighting, yet also punishes you horribly if even for a moment you lose concentration. In addition, all the basic sword fighting tricks such as parrying or power attacking are locked, meaning your first sword fight is going to be a pain in the backside.

There is some nice variety among the weapons, especially once you’ve unlocked the musket which handily bridges the gap between melee and ranged. It also kinda breaks the game though; once levelled up the musket becomes a deathstick, easily capable of downing everyone and everything. There are also one or two boss battles, but these are rather easy to play through. In fact, I downed the first boss when he was 10 feet away from me and before he landed a single blow.

I actually really like the pace the game doles out new ideas and equipment. At no point did it feel like I’d had a whole bunch of new stuff just piled onto me. You also have plenty of time to explore each area and it makes it very obvious when you’re about to leave, so you don’t go boating off to another island until you know you’ve finished off. There is also plenty of gear and weapons to go out and buy; although, you soon realise each island has a best item in each category and the rest are cheaper alternatives.

Just like being in the Caribbean
The graphics of Risen 2 are a little bit hit and miss. Outdoor scenes look really good, with the sunlight streaming through leaves in the jungle scene or reflecting off the cobbles in the various towns. In fact, I do like the designs for the areas and there are some very pretty views that are now sitting in my screenshot folder. Unfortunately, character animations are exceptionally wooden which can be a little off putting; especially when your character does the exact same hand gesture after almost every line in every conversation. It’s just a little thing but it’s really obvious after you play through the entire game. The game also crashed a few times during play, so save often.

Which brings me onto another point. Unlike other games which clean up any autosaves and quicksaves, Risen 2 creates a new file EVERY time. This can lead to some quite impressively-sized save game folders which is a massive pain. 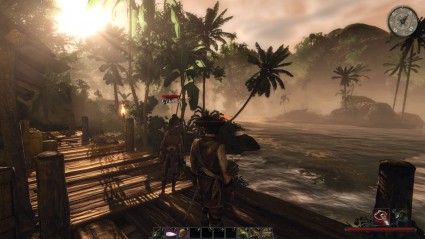 "And we can put the beach bar..there"

Worth singing a sea shanty about
Sound is actually one of Risen’s glories. It has an excellent score that ties into the gameplay perfectly. It reaches a fever pitch during the plot points, but the incidental music while wandering around the town is still pretty good. As mentioned before, the voice acting is great and really fitting for the settings, apart from one or two actors who use the same voice for everyone.

The treasure under the ‘X’
Overall, I really enjoyed Risen 2. It was a game I really got into, wrapping myself in its story and world while avoiding the little niggles the technology brought up. Overall I think the game is great way to spend your time. However, at the moment it costs about £40 off the UK Steam store, which is a little unreasonable in my opinion.