The first Serious Sam was released back in 2001, and gained fans thanks to its fast-paced action and ludicrous enemies. The people at Croteam have been refining their series, with Serious Sam 3: BFE being launched back in November last year for PC. Recently we got the release of Serious Sam 3: BFE for XBox Live, along with its DLC ‘Jewel of the Nile’.

So, what’s Serious Sam all about? Well, think along the lines of old-school shooters like Doom and Quake and that’s what you have here. Serious Sam 3 is a throwback to a bygone era. Is this a good thing though? Has that era of shooter gone by for a reason?

The game has the titular Sam ‘Serious’ Stone going around Egypt shooting aliens in the face in a bid to save Earth. There’s some mention of ancient artifacts being discovered and extraterrestrials coming down in their spaceships to, I don’t know, destroy humanity, or something.

It’s not so much a story as an excuse to travel from level to level, with Sam making quips as the whole planet burns around him. The characters are as flat as a pancake, with the term ‘two-dimensional’ not doing enough to explain just how one-note these people are. That’s not to say that some of the one-liners aren’t funny, as I laughed a couple of times; it’s just that you shouldn’t be expecting anything remotely groundbreaking with regards to narrative. For example, after shooting down a winged alien, it lets out a strange cry. Sam’s response: “Hear that Prince? That’s what it sounds like when doves cry.” I let out a chuckle, I’ll admit it. You probably will too.

Shooting Sam
Look, the story’s not the selling-point here. What we’re talking about is fast and loose shooting action. Everything moves at such a pace that you rarely get a chance to think twice about what you’re doing, with the screen often getting flooded with enemies. In fact, it’s the moments of down-time, where there’s nothing to blast, that you’ll be left disappointed. 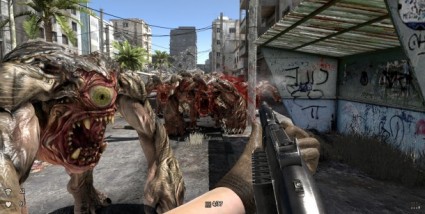 Well, who's a pretty boy then?

This is because the shooting feels extremely solid, with the large range of weapons all having their strengths and weaknesses. For example, tight corridors lend themselves to the shotgun, whilst towering monsters need a rocket or two.

Each shot fired has a real punch to it which can see your reticule wavering about a bit, though the game’s pretty forgiving with its aiming assistance. Enemies explode into a satisfying shower of giblets and blood will splatter the screen, though don’t start thinking that this game’s going to be a breeze. It’s not a case of shooting fish in a barrel, as the enemies that shoot bullets can shoot well and have bullets that hurt. The enemies that run and punch, they run fast and punch hard. For the first time in years I’ve died whilst playing a first-person shooter because the enemies beat me. A real rarity.

Changing weapons on the 360 version can be a bit fiddly, as it requires you to use the D-pad, which will sometimes fail to register a diagonal button press. In the heat of battle when you need to know that you can quickly switch to the right weapon, this can be a pain.

Then again, you’re not always relying on your bullet-slinging weapons as Sam has a mean pair of fists on him. Don’t underestimate how useful mêlée attacks can be, as monsters that get in too close can be dispatched instantly. How this dispatching takes place depends on the type of enemy. Attacks range from stomping on foes to ripping out their solitary eyeball. 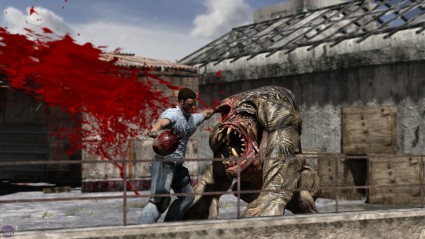 "Eye'll" be taking that, thank you very much

So as great and as frantic as the action is, it’s the moments of calm that really let Serious Sam 3 down as they only highlight the game’s weaknesses. With levels that are little more than ‘kill corridors’ and gladiatorial arenas waiting to be filled with enemies, the design funnels you through rather bland-looking locations. Occasionally you’ll want to do a little bit of exploring to find some health or armour, but apart from those goodies, all you’ll see is the same stack of rubbish bags, statues and other re-used assets dotted throughout each level. On the rare occasions that your screen isn’t full of enemies and your attention isn’t focused on killing said enemies, you’ll start to see the faults within the game.

Seeing Sam
Speaking of seeing faults, the biggest fault is just that: what you’re seeing. The graphics are pretty ugly. Textures are flat, levels contain more right-angles than I’d like there to be and although the enemies are pretty well designed, you’ll be seeing one, and only one, variant of each enemy.

That’s not to say the graphics don’t stand out; as mentioned, the enemy design is unique and the colour palette used is much more varied than the browns and darker browns you see in many shooters today.

Shouting Sam
Another feature you don’t really get in many ‘modern shooters’ is this little known thing called ‘music’. You may have heard of it (pun not intended). 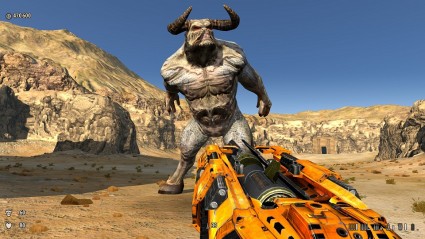 When the action kicks off, the music kicks in. Ridiculous guitars riff accompany your on-screen violence, with the volume and intensity of the soundtrack reflecting what’s happening in-game. It’s kind of cheesy, to have a horde of monsters cause the volume to explode into life, but it’s effective and it’s fun. Which is what Serious Sam’s all about.

Fans of the series will be pleased to know that a long-time staple of the franchise remains, with the headless kamikaze aliens screaming in their traditional manner. At first I thought it was pretty funny, seeing this decapitated monster yelling and running at me, but it soon becomes unnerving. You’ll often hear the monsters long before you see them and with some of the areas being large open expanses, you’ll soon be twirling on the spot wondering what angle the enemy will actually be attacking from.

Separate Sam
What won’t be attacking you is other people. You see, in a strange move, Serious Sam 3’s competitive multiplayer component doesn’t come with the game but is instead a part of the day-one DLC. I had access to said DLC but was unable to find a single game to join and after hosting a game for 20 minutes, I failed to have anyone join me via that method either. So who knows?

What I can say is that the co-op is fine. It allows you to share the madness of the campaign with one other person, though no specially designed cooperative content sits within the game. 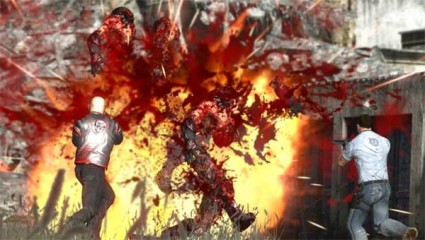 Double the entrails, double the fun...

The rest of the DLC pack, labelled ‘Jewel of the Nile’, is essentially more of the same. I honestly can’t recommend buying this content straight off the bat as the multiplayer was (is?) empty and the extra content offers nothing new. If you’re really desperate to spend another couple of hours with Sam, then go for it. If you’re after anything substantial, save your money.

Summarise Sam
I guess you want to know if you should save your money entirely, and you’re keen to find out if I think Serious Sam 3 is worth a purchase. Personally, I think it’s worth your time and money.

What we have here is a retro-style shooter that just doesn’t really get made anymore. What it lacks in visual polish, it makes up for in non-stop and unrelenting action. As someone that grew up playing Doom and Quake, it’s a trip down memory-lane that scratches that nostalgia itch.

I understand that a lot of people will want more from a shooter. Interesting level design, cinematic action sequences and polished graphics are par for the course in this day and age, so those that think ‘Call of Duty’ when they hear the words ‘first-person shooter’ might be left feeling underwhelmed and shortchanged.

This is why I’m giving Serious Sam 3 a strong ‘Try It’. Seriously, go and download the demo and do as the rating says. Sam will remind you of simpler times, when being funneled along a corridor and looking for health and armour was the height of game design, and a room containing 50 enemies was nothing more than a warm-up exercise. Whether you will consider them better times, I can’t say for sure, but for me they were. Thanks for the good times Sam, I seriously mean that.