Sports games are plentiful and developers will try anything to make theirs stand out from the crowd. One of the easiest things you can do is to pick a niche sport that people have heard of but have never played in video-game form.

Firstly, the game doesn’t bother with any sort of story or conceit. It is quite simply a series of different challenges all lined up in some neat and tidy menus. The challenges do nothing to inspire confidence, as they’re as standard as you’d expect. There are trick challenges, races and ‘go through the hoops’ segments reminiscent of the infamous Superman 64 game.

There’s really not a great deal of variety to what you’ll be asked to do and that’s hardly a problem. Nope, the game’s problems are much bigger than setting or variety.

Flying without wings
Skydive simply involves you starting at a high point and making your way to the ground. Buzz Lightyear said it best when he described an activity as ‘falling: with style’. This is that, but minus the style.

Where the real act of using a wingsuit involves all sorts of complicated aerodynamics, this doesn’t. You can control your character as if it were a plane without an engine. Picking up speed means you lose altitude quicker, as you lean forward to do so. Equally, if you pitch back, assuming you’re going fast enough, you’ll gain some height and lose some speed. If you ever glided in games such as Batman: Arkham City, you’ll have a good idea of what’s happening here. 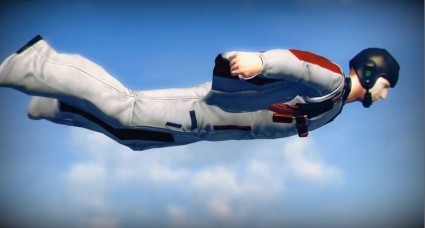 As mentioned earlier, you can do tricks, but truthfully there’s only four tricks you can do. Roll to your left, roll to your right, roll forward and roll backward. So to have a game mode that focuses on getting a high trick score does nothing more than bring to everyone’s attention how limited the ‘tricks’ really are.

There are other attempts at making the game interesting. For example, you can ‘combo’ the tricks together, but this means nothing more than doing one type of roll immediately after another. Also, you can get a ‘proximity flight’ bonus for flying close to the ground, which again increases your score.

As well as increasing your score, all of these point-giving bonuses dish out some ‘adrenaline’ as well. This is nothing more than a boost that you can use to give yourself more speed, and whilst it’s useful to be able to move faster in races, it didn’t seem to serve any other purpose.

Lastly, there’s the fact that at the end of every challenge, you have to deploy your parachute. This is such a non-event, the game even lets you skip it. There’s no discernible skill to using your parachute and getting a ‘good’ landing seemed to be down to the timing of deploying your parachute, though was never made all that clear. 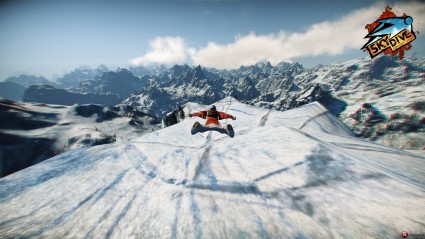 I guess flying down a mountain will take your mind off the cold.

Finally, the default control method needs to be mentioned. By default, the game gets you to use the PS3’s Sixaxis technology to control your character. I thought this fad was over as soon as the PS3 launched, but Skydive seems keen on reminding you how touchy and unresponsive the PS3’s gyroscope-enabled controller can be.

It may be worth saying that there is the option to control the game using the standard analogue sticks instead. I spent most of my time with the analogue sticks, though the controls didn’t stop the game being any less boring. Finally, a control scheme based around using the Move controller was also present, though wasn’t used in the review process.

Don’t look down
The game’s presentation is acceptable, given that it’s a downloadable title. There’s a good sense of speed to the movement and there are some subtle effects that get used to convey just how quickly you’re going.

Other than that, there’s not a lot to say about how the game looks or moves. Some pretty odd-looking collisions can occur at times, and in general there’s really nothing that grabs you about the scenery you’re flying past. There are also a number of different weather effects on show, although again they’re nothing amazing and don’t add to the game in any meaningful way.

‘Wheeee!’
The same can also be said of the audio. It’s fine and doesn’t offend, though there’s really nothing of note. Music plays, and sound effects make it clear that you’re flying dangerously close to a mountain-side. 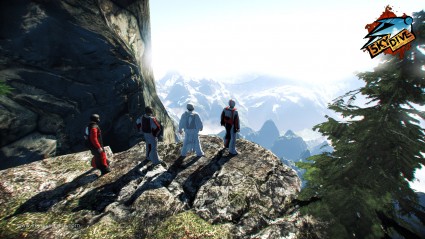 Don’t jump! You have so much to live for!

Flock together
Throughout the game, menus will tell you how you stack up against your friends that are playing the game, as well as some mention of global leaderboards.

This functionality is about as close as Skydive gets to multiplayer which is a shame, as maybe the races could have been fun with more than  one person playing.

Hit the ground
In truth, there’s not a great deal to say about Skydive: Proximity Flight as the game doesn’t have too much going on. It’s an extremely basic title that takes a relatively new sport and boils it down to nothing more than gliding mechanics seen in other games. Minus the bit where, in other games, you’d have something else to do after the gliding.

I find it hard to recommend this game as, though it doesn’t do anything too badly and isn’t offensive to play, it’s extremely dull and shallow.