Even now that the Vita is slowly getting there thanks to a recent glut of releases, some would successfully argue that it’s still missing the broad appeal of the Nintendo DS. For Nintendo, Dr Kawashima’s Brain Training was the starting point of appealing to other demographics (Helen Mirren, for example), using the DS for learning and education purposes, instead of just core games.

Well, Sony has produced its own brain trainer in the form of the new budget title “Smart As…” courtesy of XDev.

One a day!
The main purpose of Smart As… isn’t to plough hours upon hours into it. Instead, it drip-feeds you its content bit by bit, limiting most of your progress to a short daily challenge.

Here you’ll spend roughly 10-15 minutes playing through four different puzzles and mental exercises, each covering a different mental capacity from Language, Logic, Arithmetic and Observation. The science is that by stimulating your brain daily in this manner, you might improve your smarts.

There is a Freeplay mode, but you can only play the mini-games you’ve unlocked as the days go by. 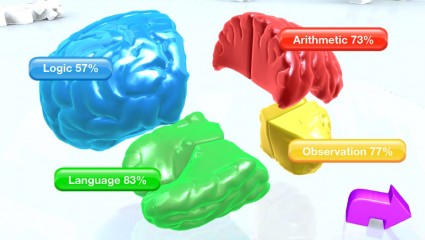 The four categories that you'll sharpen...

Let’s test your metal…
Smart As… doesn’t use traditional physical controls, only a mixture of touchscreen and gyroscope. In the context of this game they all work pretty well, feeling slick and fluid all round. You’ll rarely feel let down by the controls.

I don’t want to go into too much detail here, as half the fun is seeing what the game throws at you on a given day, and I haven’t yet unlocked or encountered all of the exercises myself (this review comes after a few days play, and some of them have repeated). Nonetheless, I’ll provide some quick examples of the types of actions you need to perform.

A language or numbers game might have you writing digits on a virtual whiteboard, or tapping them on a wheel. One of the logic puzzles has you tilting the Vita to roll cubes around to their relevant coloured squares. An observations puzzle has you pressing pop-up tabs using both the front and back screen as quickly as possible, depending on the tab’s instruction. Some games have you drawing lines between pins without them crossing, while others simply demand basic dragging and dropping, or touching the right virtual button to answer.

It’s all relatively simple, but challenging at the same time.

Each of the categories has five individual exercises that will rotate randomly in the Daily Challenge, but once you’ve unlocked them all, you can play them at a whim in Freeplay and tackle their four difficulty levels.

Without ever having a competitive multiplayer component as such, there’s also a nice social element to the game. Smart As… uses the interwebs to provide interesting titbits of information, such as which demographics are better at particular games than others, but it also tells you often how smart you are compared to other players. Loading screens regularly feed all this interesting information to you, sometimes even telling you outright which user is the best in the world in the relevant game; it’s very smartly implemented. With a game like this, Near functionality is also a given, allowing you to set and beat other player’s challenges. 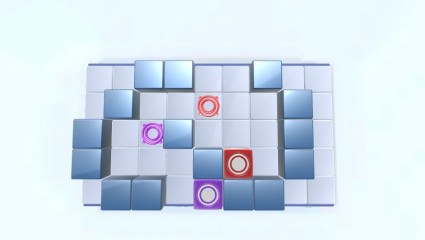 Whiter than white…
Smart As… might not be the most amazing looking game, but it’s certainly clean and stylised with bright whites offset by bold, basic colours; a theme present in every single screen. Every facet is animated gorgeously too, to the point it almost looks pre-rendered, even when in the puzzles and menus.

Not “Faulty”
I was hugely surprised to find that comedy legend John Cleese lends his voice to narrate, instruct and mock when suitable. His commentary here is classy, charming, very often funny, and just a delight to hear. What’s more, it’s amazing that you rarely hear repeated lines.

Although layered mostly with relaxing pads and tones, the game does manage to create a certain tension and urgency. Before every mini-game, it counts down with a sports-style horn, and it really instills an “I’d better not fuck this up” mentality. 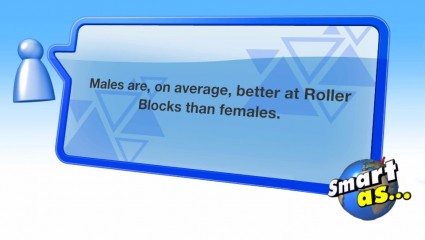 Smarty pants?
While not greatly involving and not really a ‘game’ in the traditional, core sense, Smart As… is certainly worth a look. In a lot of ways, I love that it doesn’t need too much investment in my time, even from the start. I love that I can spend a short ten minutes on my lunch or commute to play my Daily Challenge, and then chart my improvement (and failures) over the coming days, weeks and months. With that, it’s not a game where you’ll see immediate return on your outlay; it’s a long-term game.

Unfortunately, because of that, it leaves you questioning its value, even with its budget starting point. Could it have easily been a $10-$15 digital download only? I think yes, it could have been.

Regardless, it’s a solid and challenging puzzler, and I’d wager that most that take the plunge will enjoy it.