The MOBA is a fascinating genre. Everyone’s heard of them, the currently most-played PC game in the world is one, and they are the most popular e-sports genre on the planet, yet not everyone is a fan or has even properly tried them before. With humble origins as a fan mod of Warcraft III: Reign of Chaos, Defence of the Ancients (or DOTA) helped invent the concept and bring it to the public. It could be argued, however, that it never truly hit mass popularity until the behemoth that is League of Legends came along. Now the MOBA is truly in fashion, with everyone from Valve to Blizzard to EA either having released one already or being in the process of developing one as we speak.

We’ve had a Lord of the Rings-branded MOBA, Awesomenauts had a shot at a side-scrolling platformer/shooter MOBA, and elements of the genre are even creeping (huehuehue) into other games, such as the minion/creep-esque ‘grunts’ of Titanfall. You could say we’re reaching saturation point, similar to what happened with the first-person shooter over the last couple of generations. As with that situation, the industry is being dominated by a couple of heavyweights – League of Legends and DOTA’s sequel, DOTA 2. The genre also hasn’t won everyone over yet, with its often toxic community and steep learning curve.

With this in mind, SMITE has quite a challenge ahead of it now it has surfaced out of its long beta stage. Developed by Hi-Rez Studios, this mythology-themed MOBA flips the perspective from a top-down RTS to third-person action. Is it enough to make it stand out from the rest in the genre, whilst simultaneously appealing to newcomers and getting the MOBA faithful on board?

Though I can’t judge my experiences from the perspective of the latter, I can certainly relate to having been in newcomer territory. I very briefly dabbled in League and some lesser-known MOBAs a couple of years ago, but they never ‘clicked’ for me back then; I struggled to pick up the basics, couldn’t understand the appeal, and left feeling disinterested and underwhelmed.

If I now told you, then, that SMITE not only won me over completely, but was single-handedly responsible for making me love the MOBA genre as a whole, to the point where I currently spend half of my gaming time on various titles in the genre including SMITE and League, you’d realise that it was a bit of a game-changer for me.

What makes this one so different? First of all, as a long-time fan of shooters, the controls were instantly familiar. Although playing a little more like third-person action-RPGs than Gears of War or Uncharted, the average Joe, particularly a console gamer, will find this much more accessible than the usual top-down strategy mechanics. Rather than clicking to make your character move to a location, having direct control of your character gives a satisfying and responsive feel. It makes you feel deep within the action, and is arguably fairly immersive as far as MOBAs go, a trait they’re not usually known for. 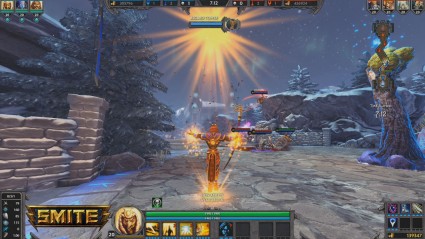 And thus SMITE descended from the heavens, as a beacon of hope to noobs struggling to grasp typical MOBAs.

I also felt very smoothly introduced to the game and its mechanics. SMITE has a brief but helpful tutorial, and afterwards encourages you to get started by practising with human teammates against A.I. bots, before diving into real PvP. League has a similar system, but what I found a godsend with SMITE was the option to have the game automatically level up my skills and buy me items from the shop. Any MOBA player will know that a character build is critical to success or failure, and having this taken off my hands to start with gave me one less thing to worry about, so I could instead concentrate on laning, combat, and all of the other intricacies involved with a match.

As you learn the various systems of SMITE, it’s apparent that while perhaps being more welcoming, it has a similar amount of depth to League and other popular MOBAs on the market. Over 50 gods are available already, with more added on a continual basis, all with varying roles and abilities. The concept of basing SMITE on mythology was a stroke of genius; it has given it a huge pool from which to draw inspiration from, and gods are the perfect fit for magic-wielding MOBA characters. There’s your typical Zeus, Ra and Hades, but also a lot of more obscure, interesting gods like the Chinese dragon king Ao Kuang; the half-girl, half-serpent Scylla; and Hun Batz the monkey god.

Much of the character roles, item system and game objectives will be familiar to veterans of the genre, as well as the ‘meta’, which involves team composition and play-styles, for the uninitiated. Needless to say, you could spend literally hundreds of hours just learning how to play all of the different gods and trying out different strategies.

Just because the controls are more accessible doesn’t necessarily make them easier, either. Due to its action nature, SMITE has a greater emphasis on dodging and skillshots, meaning you can’t just blindly fire off your abilities and usually have to give some consideration to aim. You also can’t see behind you as easily compared to a top-down perspective, which creates more opportunities to be ganked – ambushed from the side or behind.

The main mode is a very recognisable Conquest 5 vs 5 match, involving farming minions for gold and exp, taking down enemy towers while defending your own, taking part in teamfights, and ultimately destroying their base. To give a direct comparison to League, inhibitors have been swapped for phoenixes and the nexus for a titan, both of which fulfil a similar role but actually fight back, which gives a more dynamic feel to taking on the enemy base. 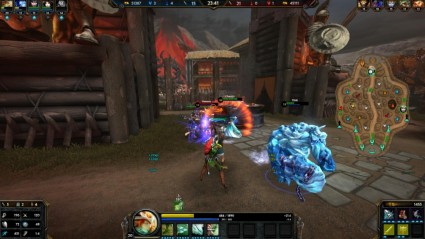 Phoenix down, only titan remains.

SMITE already has an extremely healthy selection of alternative game modes to choose from, too. The 3 vs 3 ‘Joust’ mode is faithful to its name, a medieval-styled single-lane battle arena that I’ve found infinitely more enjoyable than the 3 vs 3 Twisted Treeline mode of League, and regularly pop onto during lunch breaks when I’m pressed for time.

Adding to this is the bombastic 5 vs 5 Arena mode, which is a lion’s den of non-stop PvP action; the new Siege mode, still in beta for now; and an ‘All Random, All Middle’ mode which places you in a chaotic 5 vs 5 with a random god. There’s even a surprise mode which changes daily, establishing a theme such as ‘Girls vs Boys’ or ‘All Egyptian Gods’. This impressive slew of modes certainly helps to keep things fresh when you tire of the standard 5 vs 5 Conquest popularised in League and DOTA.

SMITE’s visuals are pleasingly designed, with a colourful and rich fantasy world that while not entirely original is nonetheless rich and not completely derivative. It’s no technical powerhouse but still looks delightful on max settings, scaling back when necessary to run smoothly on lower-powered rigs like my standard office desktop.

SMITE doesn’t avoid all of the typical trappings of the genre, unfortunately. It’s not too uncommon to experience abuse from other players, particularly if you’re still learning the ropes, although I’ve subjectively experienced less vitriol than in the minefield which is League chat. If you detest MOBA gameplay, the change of perspective which SMITE offers is unlikely to change your mind, either. 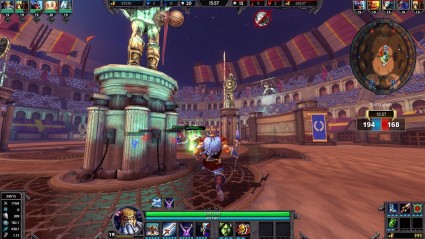 It does also inherit the best feature of its peers, however: free-to-play. Not in the same vein as garbage such as Candy Crush, but rather a completely fair and respectful business model. It sits neatly in between DOTA and League in terms of fairness – the former being unbelievable value whereby all heroes are free and only skins cost money, and the latter costing money to buy champions but letting you pay for these with currency earned through play. SMITE is similar to this, but has the superb option of paying £20 for all current and future gods.

Even though I’ve ploughed many hours into the game, I’ve still not paid a penny of real money. Several gods are permanently free, and five others are available to play at a time on a free rotation. Between this and the in-game currency I’ve earned naturally through play, I’ve just not had any need to open my wallet yet. I’d certainly not object to investing in the Ultimate God Pack in the future, though.

Praise the gods!
I’ve been well and truly bitten by the MOBA bug, and SMITE is to thank, or to blame, whichever way you look at it. If you’re yet to delve into the genre yourself, then there is no better entry point. With a forgiving introduction, a fantastic roster of gods to get stuck in to, an absorbing range of game modes and a laudable business model, SMITE firmly gets my recommendation.