I think that everyone coming into Sonic & All-Stars Racing Transformed for the first time will cynically expect the same thing; a painfully cheap and undercooked Mario Kart clone. I mean, that’s what I was expecting, certainly, and it was the exact reason I’ve kept well away from Sonic-themed racers right up until this point.

Only… I had it wrong. Sonic & All-Stars Racing Transformed is actually brilliant, and in many ways surpasses its own inspiration.

Sonic & All-Stars Racing Transformed is, simply put, a huge celebration of all things SEGA. Sonic is the lead, granted, but he’s just one name in generous roster of big hitters, with faces like Alex Kidd, Joe Musashi (Shinobi), Beat and Gum (Jet Set Radio), and Ulala (Space Channel 5), alongside many other SEGA fan-favourites.

The same extends to the real stars of the show; the race tracks, with each expertly themed around one of SEGA’s most well-thought of franchises. Players will zoom and battle it out around aircraft carriers from Afterburner, ancient Japanese villages, Samba de Amigo and, of course, a handful of carefully chosen Sonic circuits. 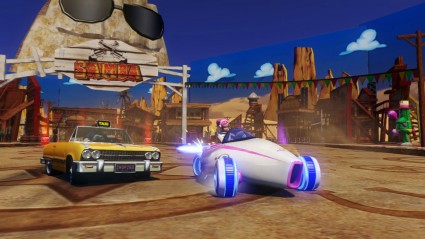 “I wanna go fast!”
As you’d expect, the game still takes plenty of cues from Mario’s karting franchise, as you’ll race, hustle and battle across the many modes, using all the boosts and power-ups at your disposal. Sonic’s effort, though, handles far smoother and tighter than Mario’s, all thanks to excellent vehicle weighting. You can really get a feel for the racing line here, and taking corners perfectly is immediately satisfying.

Racing Transformed’s maps will also take you away from the tarmac, across water and into the skies (this is where the ‘Transformed” element comes in, with your vehicle changing to match your terrain), but unlike Mario Kart 7, these factors actually make a tangible difference to gameplay. On the water, you’ll feel like your boat is actually fighting the waves and currents, and when you take to the skies, Transformed does a pretty decent flying game impression (complete with barrel roll!).

The circuit conditions are changeable throughout a race too, so you might find times where the road is literally ripped away from beneath your tyres, changing the dynamics of the race drastically from lap to lap.

It wouldn’t be a self-respecting Mario Kart clone without a whole host of bizarre power-ups, and this is no different. You’ll find heat-seeking drones that will lock on and blow up a target; a twister that will scramble your opponent’s controls (this is a bitch when you get hit by it, let me tell you); ice shots; a one-shot firework; a Blowfish mine; and a catching mitt that takes a hit intended for you and allows you to use it yourself.

My personal favourite, though, is a brilliant and much fairer alternative to Mario’s dreaded Blue Shell, and this is the Swarm. This power-up plants a number of giant bees ahead of the leader, which they must masterfully avoid if they want to stay in the lead. Much less a case of ‘press button to harm the race leader’ and more testing their ability and desire to stay in the lead…

In terms of structure, Racing Transformed features some pretty meaty modes to plough through, and the jewel in its crown is the World Tour mode. World Tour has you tackling a tree of races and challenges across five worlds, with the intention of winning it all. It’s not that simple, though. Success on each level of difficulty yields a star, and you’ll need certain amounts of stars to access all areas and events in each map, plus to unlock more of the 29 featured drivers.

It’s not just races to contend with either, as you’ll take on battles, drift and boost challenges, time trials, traffic dodging and flying missions in a varied set of game modes. There’s plenty of diversity in here to keep you occupied for a long time. 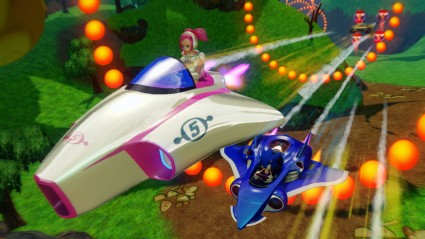 The World Tour is backed up expertly by the Grand Prix mode, which you should consider to be the campaign most like Mario Kart’s setup, as you take on four races in each league, vying to top the table come the end. The other two modes a pretty self-explanatory, with Time Attack and Single Race finishing the single-player feature set.

Across all game modes on offer, you’ll be able earn XP and level-up your favourite racers by regularly picking them. You’ll receive new car mods at each new level, and those will have an effect a character’s stats, should you choose to opt for their configuration before a race. For example, at Level 1, Sonic will unlock mod that allows for better handling, while later on he’ll get better acceleration. Each option will have knock-on effects on other stats, though, so you will have to weigh up your priorities.

No gloom…
I honestly think that this is the best that Sonic has ever looked this generation. While, as you would expect, a lot of the game is papered in bright, happy colours, to say that’s all the game has to offer is disservice to the amount of variety on display. Somehow, going from racing around the cheerful Greenhill Zone to the greyer, war-torn locales of Afterburner, or the creepy House of the Dead’s Curien Mansion is never jarring.

There are some lovely visual effects in motion too, with clever use of motion blur really helping to reinforce that sense of speed that you’ve come to associate with not only Sonic, but also racing games as a genre. The tracks are also ridiculously busy, with action going off all over the map, be it a town’s dancing houses or humongous robotic squids aiming to disrupt your race. It’s never to the point of being overwhelming, though.

It’s in this busy nature that you’ll find some remarkable attention to detail in regards to fan service and Easter eggs. As a quick, non-spoilerific example, forgotten Sonic rival Ristar is the game’s flag-bearer, kicking off and bringing in the end to all the races. There’s so much going on that it’d be impossible for me to mention it all, but make sure to keep your eyes peeled.

Breaking the sound barrier
Unlike some of the older Sonic spin-offs, Racing Transformed doesn’t go too far overboard with reusing classic SEGA soundtracks and sound effects, but you’ll find the odd classic theme here and there. It is very arcade-sounding as an audio package, with light dance beats, tailor fit for the action.

Voice-acting is pretty good on the whole, without too many repeated quips from your drivers. It’s just a shame that Sonic is still stuck sounding like an annoying teen… 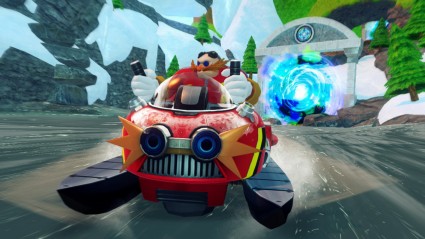 Of course Robotnik/Eggman is here to cause trouble…

Fight!
Multiplayer in Sonic & All-Stars Racing Transformed is crazy fun, and for many people it will absolutely make the game. It can be fully enjoyed online or locally with friends in your living room, with the latter probably being the most fun way to play. There are plenty of modes to keep you entertained too, with Mario Kart-like Battles and Last Man Standing modes stood up against the more typical race modes.

The online stability here is very decent on the whole, and I’ve not encountered many latency issues, though I will mention one thing: a couple of times it seemed that the online multiplayer was eerily quiet. A few times, attempts to play quick matches repeatedly only found the same handful of people every time. An hour later, there were no problems at all finding different, full rooms of competitors, so I don’t believe it’s as a result of an abandoning community.

Maybe I had temporary glitches, or maybe it’s an underlying problem with the matchmaking system; who knows? It at least never prevented me from finding a game, so it shouldn’t be a major factor in your decision to purchase.

Supersonic?
I’m not afraid to admit that I was wrong with my pre-conceptions; Sonic & All-Stars Racing Transformed is a fantastic game, one that not only stands tall next to the likes of Mario Kart, but manages to surpass it in size, scope and ambition. I just hope that the same misconceptions that I had don’t prevent others from taking the plunge, because they’d be missing out on an incredibly complete and enjoyable package.

For SEGA, this represents the best that Sonic has ever been this generation. Hopefully, they’ll start ensuring that the same level of effort goes into Sonic’s more traditional adventures.