Starhawk is the spiritual successor to 2007’s multiplayer-only Warhawk. It builds on the original’s formula of frantic running, gunning, driving and flying by adding a solid but short single-player campaign, and the ability to build structures during the heat of battle. Is it a worthy successor?

Frontier blues
Life in the old west was all about hard work and graft. Dreaming of fame and fortune, people gathered what they had and headed out into the wilderness of the new world to stake their claim, work hard and hopefully strike it rich. Things haven’t changed much since then in Starhawk. This time, people are rushing to the new frontier at the edges of known space to harvest rift energy, and hopefully strike it rich just like their forebears.

Sadly, new frontiers and the promise of riches also attracts outlaws and general troublemakers, so the poor settlers have to rely on people like Emmett Graves to protect them and their claims. You take on the role of Emmett as you return to your old home of White Sands to help the settlers fight off outlaws and mutants, while facing the ghosts of the past before they can threaten the future.

Shake ‘n’ bake
Starhawk walks and talks very much like your average shooter. At least, it does at first. You have your run-of-the-mill hard man protagonist Emmet running in to save the day all guns blazing, shredding enemies to bits by the bullets from his machine gun, pistol, sniper rifle and shotgun.

However, this is the frontier and they do things a little different out here. As well as a wide selection of handguns, rocket launchers and even chainsaws, Emmet also has access to various vehicles, from speedy hoverbikes to bulky tanks and all-terrain buggies. The most impressive piece of kit in the arsenal, however, is the titular ‘starhawk’: a bulking mech that can turn into a fighter jet at the flick of a button.

The recipe for chaos and utter destruction becomes even more potent, as enemies also have access to similar hardware. This sashes nicely into one of Starhawk’s more unique features; the ability to call down whole buildings from your low-orbiting spaceship in the heat of battle.

It works in very much the same way as your typical real-time strategy game. You gather resources in the form of rift energy collected from containers or fallen enemies. This energy can then be used to “buy” buildings, from a simple wall, to turrets, supply bunkers and garages for vehicles, to landing platforms for starhawks and so on. All of this is done by simply holding down the triangle-button which brings up a dial of available buildings. Once selected, you just choose where you want it delivered and it will be sent to its designated location via a landing pod, which then unfolds into the building itself in a matter of seconds. 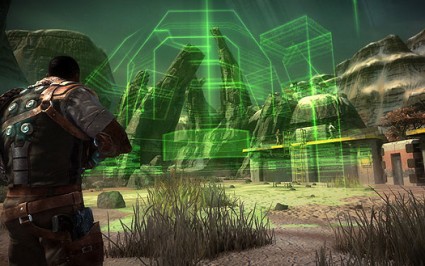 Emmett prepares to call down a building

The short delivery-time of your “shake ‘n’ bake” buildings is vital, as the onslaught from enemies is relentless. Ground can be lost just as quickly as it can be, gained so the key to survival is to fortify your position as best as you can. Luckily, you always get some warning where to expect the next attack from. This gives you some time to build walls, place turrets and reclaim old buildings no longer needed or in the wrong position.

It might seem a tad overbearing that the game tells you where enemies are coming from. Yet while it does remove the element of surprise, it certainly doesn’t make things any easier. Enemies often attack from several sides and while it might not happen at the same time, you often only get a minute’s warning or less to sort out your defenses.

The ability to build adds strategy to the mix. Just like the action itself, decisions on what to build and where and when to build it have to be made very quickly, as everything can be demolished almost as quickly as it can be built. It’s a daunting task at first first, having to make both strategic and tactical decisions on the fly, but the two complement each other nicely. This makes Starhawk feel so much more than your average sci-fi shooter, where rewards of victory are only granted to those with the itchiest trigger finger.

Lessons in death
While the single-player campaign is entertaining, multiplayer is where you get the most bang for your buck. The game supports up to 32 players online which leads to some incredibly intense battles. You have all the usual varieties of multiplayer from deathmatch to capture the flag, that can be configured with different “load-outs” which grant or restrict access to various buildings and vehicles.

There are more specific modes like dogfights, using only starhawks in their fighter-mode. You can also team up in co-op and defend your claim against wave after wave of enemies. Co-op relies more heavily on you managing your resources carefully and taking the time to plan out what to build than any other mode, but that also make things all the more sweeter when your defense-plan comes together.

Just like the frontier of the olden days, multiplayer is not for the faint of heart. Newbies need to be aware of this, as lessons in death and defeat are plentiful and will chip away at whatever self-confidence they managed to build up during the single-player campaign. The same warning rings true for more hardened online players, as buildings and vehicles seem more brittle and fragile in multiplayer than in single player. 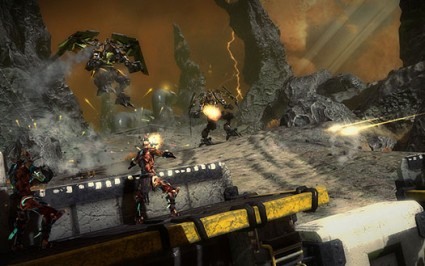 This is not a problem per se, as a ramp up in difficulty is often to be expected from any game when going from single player to multiplayer, but it still seems like Starhawk is taking this just one step too far. Whatever you build, drive or fly can be destroyed much quicker than you would expect, which makes the multiplayer even more hectic. You have to be on your toes constantly.

This will cause some annoyance at first, but stick with it and you will be treated to some very hectic multiplayer action. This is very much thanks to the ability to build structures and use vehicles, which adds much more depth to the gameplay and makes the constant push and pull between victory and defeat all the more intense.

Again, it all comes down to building the right thing at the right time. This is relatively simple when it is just you calling the shots in single-player, but it becomes much more tricky when you are working as a team. Coordination is key, which can be tricky as you can’t give out quick commands and have to rely on voice. So if you haven’t got a headset, now is the time to get one.

Once you get the hang of it and roles are delegated and adhered to, it’s an absolute joy to see enemies crumble under your turrets as you and your team swoop down on the enemy base in your starhawks, ready to unleash hell. This is something few other shooters can replicate.

The new Old West
Starhawk’s frontier-theme shines through in its presentation, with a funny mix of old Western-aesthetics and high-tech sci-fi. Old rusty chunks of scorched metal, ruined buildings, alien vegetation and small settlements litter the landscape that stretches out before you underneath dramatic skies. High above, orbital platforms with heavy machinery drift silent through their orbit.

It all takes a page out of the look and feel of Joss Whedon’s Firefly, but does so very respectfully. Still, you can’t help but think that Starhawk could easily have been a Firefly game in another life. 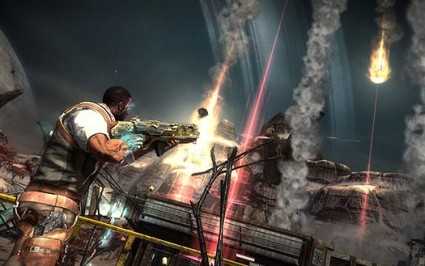 Don't you just hate it when uninvited guests drop by?

Grinding metal
The sound is as rich in texture as the graphics, with explosions, gunfire and systems beeping warnings as buildings crumble and enemies rattle in their death throes. The starhawks are especially impressive, as you can hear their inner gears moving and grinding against each other. The lumbering hulks stride about the battlefield while the various building pods hit the ground with an immensely satisfying “thud”, followed by a cacophony of twisting metal as the buildings erect themselves.

Walking tall
Starhawk is a very accomplished shooter that succeeds both in multiplayer and single-player, and it does the PlayStation proud as an exclusive title. It walks tall amongst giants, as it’s quite clear to see which other classic shooters it draws its inspiration from, yet it still throws enough innovation into the mix to appear fresh and appealing to anyone looking for a new shooting-fix.

It does take a few stumbles along the way though. The imbalance of going from single-player to multiplayer where vehicles are much more fragile can be overcome, but it will make your first hour or two in multiplayer frustrating. Small niggles also rear their ugly heads now and then in both modes, causing grievances where there shouldn’t be any, like the imprecise selection-dial that means you often end up selecting a wall where you wanted a turret and so on. 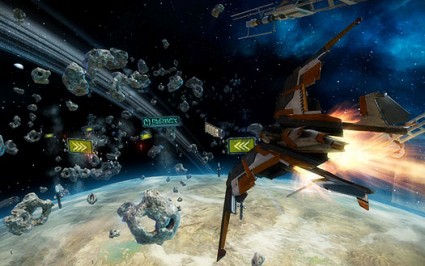 The game also has no cover function, which might have been a deliberate choice from the designers as it forces the players into the open. This makes things more chaotic than a slow-moving “trench battle” where stalemates can last forever as each opposing force bunker down behind their covers, and only gain or lose new ground centimeter by centimeter.

This is not a problem as such, nor a bad decision per se, but there will be moments where you cry out for cover to win some respite and won’t find any. Cover functions seem standard in every shooter released these days, so it’s strange that Starhawk omits these completely.

The single-player campaign is well paced and entertaining from start to finish. It introduces new elements at a steady pace so you never feel too overwhelmed. However, satisfying though it may be, it too suffers from different inconsistencies, like some later missions preventing you from calling down certain buildings for no apparent reason.

The campaign is also too short to be worth the price of admission for people who don’t want to play the game in multiplayer, hence the rating. If this is the case, the game would make a much better rental. People who already live and breathe multiplayer will find plenty of fun behind the controls of a starhawk, as building pods are crashing down all around them.