Starwhal: Just the Tip is full of charm and it’s certainly fun, but it’s a little tricky to argue that it’s good value for money. On top of this, it certainly doesn’t hold up to any sort of prolonged single-player usage.

*please note: I didn’t buy this game. A review code was supplied. #TransparencyStarwhal: Just the Tip is a competitive local multiplayer game where you’re tasked with stabbing your opponents in the heart with a horn that you’ve got attached to your head. This makes sense because you’re a narwhal that happens to live in space.

It makes less sense that these adorable, galaxy-traversing sea-mammals would want to murder each other over and over again. I’m trying to fix this by writing some fan-fic that explains stabbing each other in the heart is a part of their mating ritual. It’s going to blow the Starwhal community’s collective mind. 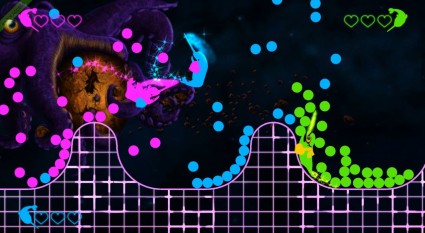 It’s colourful. It’s not cute. These creatures are stabbing hearts!

With the basic premise out of the way, it’s time to consider why the simple act of stabbing a space-whale in the heart is fun. This is in no small part down to the controls.

It’s simple enough, with the player pushing left and right on the analogue stick (don’t play this game on a keyboard!) you can rotate your Starwhal and by pushing up you launch them forward. This is all accompanied by some physics which cause you to flip and flop around in equal amounts.

This flipping and flopping is important to Starwhal: Just the Tip because if you’re facing the ‘wrong’ way, you’ll leave your heart open to attack.

This causes games to turn into a series of charges at each other, almost like jousting. Sometimes you’ll be able to use your horn to flip an opponent over, leaving them vulnerable. If you overshoot your forward charge, you’ll soon find yourself in a precarious situation. 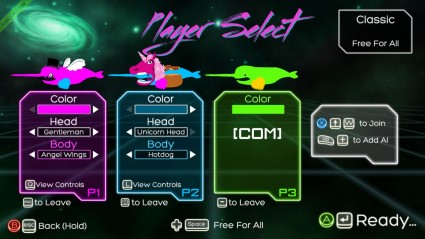 You can dress-up your narwhal. It serves no purpose but I do it anyway.

Each game has an ebb and flow to it where someone can deflect an attempted thrust, be inches away from stabbing their opponent, have themselves flipped over and then subsequently be stabbed by their opponent. It’s very exciting, it’s very fast and it’s very easy to get to grips with.

Adding to the mix-up is the fact that each stage has its own unique layout with some featuring match altering properties. Some locations contain bouncy walls whilst others have surfaces that act like half-pipes, flinning you around the screen. Being able to use the elements to your tactical advantage, either intentionally or by accident, is a great feeling and only adds to the pandemonium that is your typical Starwhal match. There’s no arguing that Starwhal: Just the Tip is great fun, there are issues.

The main concern being the amount of content. Attempts have been made to flesh out this title, with extra game options being available from the start. Modes where you have to ‘steal’ a heart and keep hold of it and another where you aim to claim as much of the level as possible are fun, but none of them are as good as your traditional deathmatch. This means that you’ll try them all once and then more than likely forget about them. 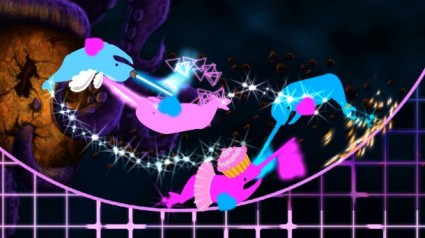 Sparkly Horns of Colourful Death. A great name for a band.

The single-player offering is also pretty weak. There are time-trial challenges to complete where you have to shatter targets as quickly as possible. You’ll get achievements and little else for your effort. Fair enough, considering this is a multiplayer game, but it’s the price that causes me the biggest worry and ultimately makes this hard to recommend without caveats.

Starwhal: Just the Tip is a great multiplayer game. It’s competitive without being complicated, and it’s hectic without being unfair. A very simple premise that’s delivered with cute and colourful graphics and a thumping soundtrack. For the price that it’s currently selling at (£9.99), it’s just too much to ask for. If you spot it in a sale or if you think that £9.99 for a multiplayer game’s not too much to ask for, then by all means jump right it. It’s a blast.