You’ve heard of Minecraft. I can almost know that with certainty. You may not have played it or even seen it, but unless you’ve had your head in the sand for the last few years you’ll have heard about it somehow. The blocky mine-’em-up has literally taken over the universe and made an absolute fortune for its developer Markus ‘Notch’ Persson and his company Mojang.

Unsurprisingly, many other developers have attempted to cash in on the seemingly overnight rise in interest over the genre, mostly by copying Minecraft exactly and adding minor tweaks. Before 4J spat the title (or at least a year-old version of it) on to XBLA, a few indie games even gave it a try.

Not wanting to jump on the bandwagon too hard, indie studio Re-Logic decided to take the mine/craft/survive formula in a different direction. Terraria, released after the Minecraft ‘alpha’ but before the game was actually ‘finished’, was a side-scrolling take on the genre that focused more on actual progression and survival combat than simply building large edifices out of endlessly mined stone. It also took the action into the 2D realm and was more than a little popular, although it never managed to reach the heights of its three-dimensional cousin. Now available on XBLA and PSN, does Terraria have enough to drag people away from their endless worship at the altar of Minecraft?

Eyeballs or something…
Terraria has about as much story as Minecraft, and by that I mean almost none. Apparently I’ve been told there is a plot, but you’d be hard pushed to find it unless you dug deep. The focus here is not on telling you a story but allowing you to tell your own, and therein lies the first problem.

It’s all well and good letting players loose in a sandbox and giving them no clear objective, but unless the core gameplay is utterly compelling it leaves a hideous void where a story should be. I’ll get onto why this is an issue in a minute.

The annoying thing is, Terraria presents an instantly more interesting world than its genre peers. Within the first hour you meet NPCs, delve into caves to get treasure and fight at least six different kinds of enemy. Compared to Minecraft’s often slug-paced gameplay it’s a breath of fresh air.

The problem is, without any context or reason it all feels a bit pointless. You kill monsters to get stuff to make stuff to help you kill more monsters. At night there are additional monsters. As someone who took the vanilla version of Minecraft to its end years ago and played the PC version of Terraria to death, there’s absolutely nothing to keep me playing this version at all. 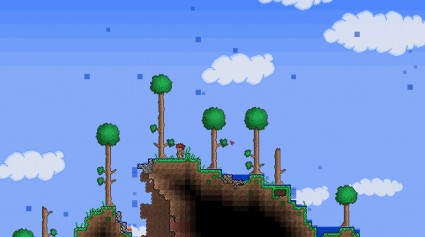 What if you’re looking for something specifically with no story? Might Terraria be the game Minecraft could have, should have been? Well, maybe, if it wasn’t for the aforementioned gameplay.

Both hands tied
Terraria is a game of two halves; the familiar mining/crafting/building aspect that is initially so damn compelling and a more traditional hack/slash/treasure chest angle that gives you a reason to explore and rewards you with more traditional RPG-style stuff. The trouble is that both aspects are let down by a horrific control set-up.

It seems designed for neither element and makes both a chore. Initially feeling like a poor attempt to transplant the PC release’s controls to a gamepad, it soon becomes clear that Re-Logic actually actively attempted to create an entirely new interface system for the XBLA version and failed epically.

Interacting with the world is clumsy and inaccurate. You hold the right stick in the direction of a tree and squeeze RT in vain hope that your little character will cut the wood and not try to dig the ground with his axe. You can switch to a mouse pointer-style system which is more accurate but just makes you wish you were playing it with an actual mouse. Once you’ve gathered enough resources to build things, getting around the crafting menu is needlessly fiddly. The icons are so tiny and nondescript that I ended up fabricating 100 wooden platforms thinking they were tables. Only the wobbly white text, often made hard to read by the background, told me I was making a mistake.

Actually placing your constructed bits and bobs around the world is again difficult to do accurately, which is a massive inconvenience when you have finite items. Putting aside the fact that ‘wooden walls’ actually ended up being simply the background wall (huh?), building anything is a case of either holding the stick in the general build direction and hoping it doesn’t mount too far upward or painstakingly placing each piece with the awful pointer control. Both are tedious and make what is supposed to be one of the most enjoyable aspects of the game boring and frustrating.

To its credit, Terraria offers a huge range of craftable goods and the ones you don’t use to build with are much more interesting than they first appear. Swords, armour and other weapons are in abundance, each with RPG-ish stats and requirements. While you don’t actually level up, finding more precious metals and materials allows you to craft ever better gear and at least that adds some sort of progression to proceedings. Fallen stars and found potions can be used to upgrade your health and mana too. It’s a shame the control system makes using them more difficult than it should be. 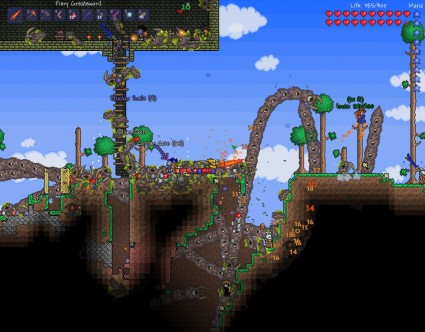 Attacking enemies is fine but feels like an afterthought, almost like using a sword is no different to using a spade. This wouldn’t be so much trouble if combat wasn’t such a big part of the game. Every second, even in daylight, you’re bombarded with enemies of all kinds. Delve into a cave or hang around outside when the sun goes down and it only gets more hectic. The combat controls just aren’t up to the challenge and your little character’s blocky and stiff movements make things worse.

I understand Terraria is supposed to be challenging, but I’m a big opponent of shoddy mechanics being responsible for a large amount of the difficulty. I don’t mind getting mobbed by floating eyeballs and dying like a bitch, but when I feel like I’ve got one hand tied behind my back it’s no fun.

In fact, scratch that; Terraria ties both your hands. It’s clear that Re-Logic should have implemented two separate control systems, easily switchable with a button press. One would focus on gathering and building and include a more creative placement system and more clearly signposted crafting. The other would transform the game into a responsive, tense action platformer with a focus on combat and allowing you to use the many weapons you make and find in conjunction with each other. Maybe they thought about doing that but decided it was too much work. That lack of effort bleeds into every aspect of the game and it’s appalling.

Having played the PC version a lot I can safely say there is little to no difference here. Rather than updating the game and fixing some common criticisms, Re-Logic have simply copy-pasted their game into our 360′s and thrown together a barely-capable HUD and control system to hold it together.

Retrocraft
Graphically Terraria goes for retro but manages a pretty ugly interpretation of it. While everything is brightly coloured and the art and sprites are cute, the obvious lack of improvement has made the jump to big-screen HD a painful one.

There’s one thing having cute, nostalgic graphics and it’s another being able to see each individual pixel clearly. It looks like everything is made up of tiny crumbs and lends the scenery an ugly, grainy look that’s hard on the eyes.

As for design, Terraria has some neat ideas, mainly in the enemies department, but generally sticks with basic land and foliage unless you venture deep into the caves or run far, far, far away from your start point. The NPCs you encounter are boring and unremarkable, making the fact you’re supposed to take care of them almost laughable.

Endless loops
Music is one thing that must be quite difficult for sandbox games. With a more linear, story-driven experience you can compose specific bits of music to fit scenarios or set-pieces, breaking up the ambient tunes that underpin the more explorative sections. Terraria only has these endlessly looping soundscapes to play with and as you’d expect they get old quickly. It’s not that they’re bad, just that any piece of music gets tedious after the hundredth time. I ended up turning the music off after a few hours.

The other sound effects are basic to say the least, vaguely invoking the more average 16-bit titles of old and feeling like they’re only present because their absence would be odd.

Journey together
Terraria offers sofa and online co-op right from the off and it’s here that the game shines. Well, sort of.

Playing split-screen with a friend is a doddle, a simple case of them pressing Start at the world select screen. The issues come in fitting both your views on-screen. Bizarrely Re-Logic decided to zoom your view out further when there’s two of you, making the already tiny objects almost impossible to see. I’ve got a pretty decent 32 inch TV and even sitting just a few feet away I found it hard to make anything out.

You also have no control over the camera zoom, so both myself and my friend had to sit cross-legged on the floor, about a foot away from the screen to have any chance of actually playing the game. Talk about fucking up your eyesight.

Online is obviously devoid of this issue and works very smoothly, with no difficulty getting into a game and a pleasing absence of lag. Then again, with graphics this basic I would’ve found it incredible to experience any. Not wanting to sell the game short on its merits, I’ll say that if you do enjoy the core Terraria experience then the online multiplayer makes it twice as fun. Questing and exploring with a friend is much more enjoyable than on your own and it even makes building less of a chore. The enemies do appear to increase in number though, so don’t think it’ll make the game any easier.

The throne is unchallenged
So not the Minecraft-beater some touted it to be, then. While the PC Terraria was a fresh distraction from the Block King and offered an extra layer of gameplay, this crude port only serves to prove that without a lot of extra effort, mouse-based games just don’t work on console.

The lack of any real care is astounding. From the shoddy, broken control system to the horrid graphical presentation, Terraria smacks of a cash-in release and that’s just not on.

If you’ve never played it and fancy another endless game to play with your friends, Terraria just might fit the bill. If you have any experience with the original version or are looking for a sprawling, solo adventure though, you’ll be sorely disappointed. Minecraft’s dominance over XBLA remains assured, however boorish you may find it.