The Legend of Zelda: The Wind Waker HD

You know what? I’ve been a Legend of Zelda fan for nearly as long as I can remember. From exploring an 8-Bit Hyrule on the NES all the way through to the gorgeous, painterly visuals and motion-controlled swordplay on the Wii, there hasn’t been a single game in this series that I haven’t played and loved. One of the most divisive entries, thanks mostly to its cel-shaded graphical style and bold colours, was Wind Waker on Gamecube. Those that gave it the chance went on to find a beautiful and typically charming Zelda game, while those that foolishly derided its ‘childish’ visuals did so to their own detriment; they missed out on one hell of an epic adventure. One of Link’s very best, in fact.

It’s ironic, then, that Wind Waker’s controversial art direction is the very thing that’s kept it from aging in the same way as other games from its era. Out of all the 3D Zelda titles, its bold art direction still holds up today, so it’s easy to see why Nintendo opted to give this iteration in particular a shiny, high-definition makeover. In doing so, they’ve only made the beautiful more beautiful, and despite fixing one or two minor niggles with the original game, they’ve proven that it isn’t just the visuals that hold up well in these modern times.

Where the old top-down games and even Ocarina of Time sought to put you in the thick of the action straight away, Wind Waker takes a slightly slower approach to its opening. After waking from his typical slumber, this generation’s Link spends a short time getting to know the inhabitants of the equally sleepy Outset Island. It’s very apparent here that he’s not an outcast as OOT’s Link was, but a loved member of his community, no more so than by his Grandmother and little sister Aryll. This simple framing gives you something no Zelda had provided before; a genuine sense of loss when his sister is kidnapped by a gigantic menacing bird.

The quest to rescue his sister (and thus to uncover a greater danger in the process) is bolstered heavily by wonderful characters. The feisty pirate leader Tetra is the most prominent and interesting thanks to several twists and turns, and you also get to see Ganondorf in one of his utmost powerful and intimidating forms. Meeting and chatting with the world’s inhabitants is always a real treat too, as are the side and fetch quests that many of them will bestow upon you. 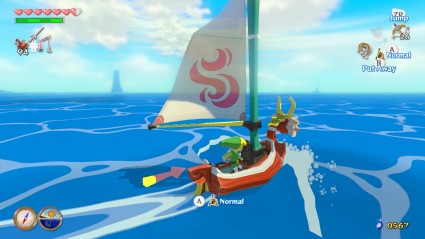 You never know what delights await over the horizon…

For the most part, events follow the typical Zelda format with time split between exploring its magical, nautical world and conquering the series’ famed dungeons. Exploring the world via the open sea is a ridiculously satisfying experience, and even on this second time around I found myself just sailing mindlessly, taking in the sights and sounds (including that glorious soundtrack), excited to see what was on the next island or over the horizon. It’s here where the game is at its most dazzling and, in my mind at least, it’s the most visually striking game on the Wii U. Thanks to more power in the box, CRT TVs being a thing of history and the game engine’s new dynamic lighting system, the bold, crisp colours and character designs really pop like never before.

Typical of the series, the dungeons are impeccably designed, housing both a myriad of menacing foes and thoughtful puzzles. In 2003, Wind Waker had Link tackling fights with a little more finesse than in his previous adventure despite reusing the basics of locking-on and hacking away. Fights in Wind Waker require good timing, dodging and countering if you’re to come away from battles unscathed. What’s truly astounding is that this system is still as robust in 2013 as it was an entire ten years ago. Wow, don’t I feel old now, if I didn’t already from the review’s introduction.

The dungeons, unsurprisingly, have to be tackled in a certain order, imposed by the need for particular items if you’re going to crack the puzzles and boss fights within. It may be a structure used ad nauseum throughout nearly all the Zelda games, but it’s something I’ve never felt tired with, thanks largely to the gentle drip-feed of new toys and abilities offering up new ways to play. The boss fights in those dungeons are large in scale, brilliantly directed, and there’s always an engaging rhythm to bringing them down. Much like every other danger in the dungeons, they’re practically a puzzle themselves, and they’re as satisfying as ever to solve.

If Nintendo had simply prettied up Wind Waker, it would likely have been enough to see most fans happy (including me), but they’ve taken the effort to improve some minor niggles where needed. For example, standard travel by sea requires Link to constantly change the wind direction using his wind-manipulating wand, but if you choose to seek out the new Swift Sail, you can travel at double the speed and always have the wind at your back. Handy! The infamously contentious Triforce quest has been streamlined too; a smart move to lessen the frustration of what was ultimately arbitrary game-lengthening in the original release. 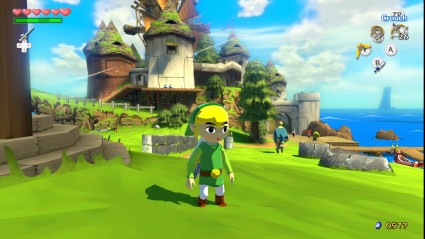 The Wii U’s feature-set offers up some changes to the way you play. The second screen on the gamepad, for example, makes managing your inventory and checking your maps an effortless process. You’re no longer required to pause to switch to your weapons around, while mapping them requires only a simple drag and drop. Aiming with certain weapons can be done using the pad’s gyroscope, which only makes hitting your targets a lot easier. Miiverse integration too is impressively handled, allowing you pop messages – such as hints or pictures taken with the in-game Picto Box – into bottles and send them off for other players to find during their own adventures. The trio from GTA V haven’t got anything on Link, as he too can now take selfies and send them off for the world to see, which is, frankly, bloody hilarious.

Despite the few things that have seen improvement and how well the rest of Wind Waker holds up generally, it does still show its age from time to time. There was a notable example when I needed to gain access to a pirate ship using a password. The question was an easy one and I knew the answer, but I wasn’t allowed entry until I’d snuck into a nearby building to trigger a cut-scene, which then told me the very answer I had already been entering. This was equal parts disappointing and jarring and is typical of age-old game design, but thankfully such cracks in this magnificent revisit are very few and far between.

Sail away…
Put simply, The Wind Waker HD is the definitive version of one of Nintendo’s finest ever games. It’s barely aged a day mechanically in ten long years, which is astounding when you think about it, and the high-definition polish brings this charming and colourful world to life like never before. With the additional enhancements and clever modernisations, it’s every bit as essential now as it was back in 2003.

A magical adventure that’s absolutely worth revisiting and – for my money – is the best game available on Wii U at this moment.