I’ve always had the worst luck with earphones. Throughout my mobile music listening history, I’ve had them snap, get stolen, stop working for no reason, start giving my ears electric shocks; you name it, I’ve had it happen. It’s costly constantly replacing them too, and thus recently it has resulted in me repeatedly buying cheap, shitty buds just to tide me over.

Of course, cheap buds are no good for when I want beefy sound accompanying my lunchtime gaming sessions, as I attempt to drown out the monotonous office background noise about ‘touching base’ and ‘going forward’, among other equally obnoxious entries in the office’s daily bullshit-bingo competition. Gah! Deep breath!

Having recently been enjoying a new pair of Turtle Beach headphones at home, I thought I’d take a punt on something from Turtle Beach’s mobile range to help. After much deliberating on the three models available, I eventually landed on the very affordable but compact M3 headset, and so far I’ve not been disappointed.

When you first open the box, the first thing that surprises is the set’s diminutive nature. You’re looking at a compact headset here; one that collapses nicely in on itself, making for a convenient size for shoving into backpacks, handbags or manbags.

Helping to keep the build size down is the fact that the cans don’t actually cover the entire ear, instead sitting directly on the ear over the lugholes. This sounds like it could be uncomfortable for long sessions, but let me ensure you that they’re extremely light, and in two month’s usage I’ve never once experienced any pain or discomfort. In fact, you can barely tell you’re wearing them.

The cable is short, but absolutely perfect for portable gaming, such is the distance we tend to hold these devices away from our faces. Probably best not to expect to house your iPhone in your trouser pocket if you’re going to use them for music, though… 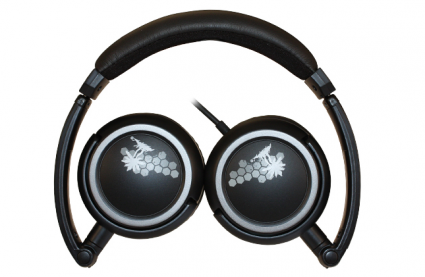 The set folds up quite nicely...

The cable does, however, come complete with an inbuilt communicator that not only works on iPhone and Android (including track changing via the set’s solitary button), but also when playing online with the Vita! A great feature! They also come with an adapter so that you can use them for communication on PC too. I’ve done limited voice testing, but I’ve had no issues whatsoever in the little I’ve done.

Of course, without portable USB power, they’re naturally going to lack that amazing impact and oomph of their big brothers, but that doesn’t mean they completely lack punch themselves. Having tested with all compatible formats (3DS/Vita/iPhone/PC), when the volume is cranked up loud, these little beauties will provide clear and powerful sound no matter what you’re playing, with a great low-end and plenty of bass.

Downsides? The M3’s lack of heft does leave the build quality feeling a little cheap, but without wanting to stamp on them as a tester, I’d wager that they’re a bit tougher than I’m giving credit for. It still would have been nice to see some sort of carry case included, but for the price, you can’t really complain.

Secondly, there is no independent volume control, so if your source is quiet, then you won’t be able to give it a little boost like you can on some other headsets. It’s not a massive drama, though; they’ve been plenty loud enough with all games I’ve tested them on, even in the noisy locales of offices and trains.

Suffice it to say, my lunchtimes have been rescued with my purchase of the Turtle Beach M3. They’ve proved perfect foil for the likes of Sound Shapes (especially!), LittleBigPlanet, Theatrhythm, Ziggurat and various Vita fighting games on the move.

Compact, portable and very affordable. If you’re a regular gamer on the go, you should definitely give them a look (or listen, rather! Fnar!)

Right, I’m off back to work to do some ‘Blue Sky Thinking’… Euuugh.