The name Futuremark should be one that most people who like tinkering with their PCs should know quite a lot about. They make 3D Mark, perhaps the most famous benchmarking tool for the PC to date.

What most people don’t know is that Futuremark also make games; their first was a PC first-person shooter called Shattered Horizon, which looked fantastic but was deeply flawed at launch. Then they made Hungribles for the iOS, which was a little more successful, and is supposedly quite fun. Now they have returned to Steam with the Unstoppable Gorg, a new and different take on the good old tower defense genre.

Unstoppable Gorg is heavily inspired by ‘50’s style sci-fi films, and this is evident from the off. The story starts when humanity discovers Planet X, lurking beyond Pluto. Miss Solar System herself, along with the dashing Captain Adam, travels off to this world to act as peace envoys for humanity. However, the aliens turn hostile and it’s up to you to defend the human race’s hold on the Solar System from the Unstoppable Gorg! 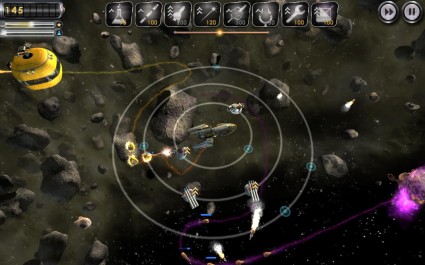 Yep, that's two different motherships you have to deal with

Now, I’m a sucker for in-game FMV with terrible special effects, and Unstoppable Gorg is packed full of this. From the cheesy between-level briefings to the terribly-acted live action scenes with all their home-made props, it perfectly hits the vibe of films like The Day The Earth Stood Still and Forbidden Planet.

The best form of defence is rotation
Gameplay is very similar to the standard tower defense; place turrets to prevent waves of enemies from reaching your base and destroying it. However, Unstoppable Gorg changes this through the use of orbits.

All the turrets you place are positioned at different spots on the orbit surrounding the main base at the centre of the map. These act like the standard placement points used in most tower defense games. However, you can also rotate them, allowing you to move your turrets when they are not in use or when the enemies shift their path. It’s a great idea and makes it a little more hands-on than other tower defense games, which can just turn into you watching the enemies get minced up by your perfectly arranged turrets.

Apart from that, though, it is very much a standard tower defense game… except for the fact that it is really, really hard. There is an awful lot of trial and error, which increases later on in the game when new races pop up and require different strategies to defeat them.

Visions of space
The best way to describe the visuals of Unstoppable Gorg is that they are perfectly serviceable. There is nothing terrible about them, but they really don’t have any lasting impact. However, they do the job well; from unit cards to the little enemies winding towards your base, they all do the job they are designed for. In contrast to Shattered Horizon that prided itself on its graphics (to the point that it broke the rest of the game), the aim here was obviously to create great and compelling gameplay, rather than just look fantastic. 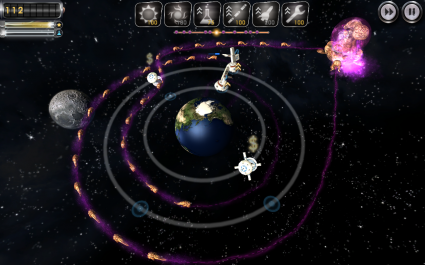 The sounds of the stars!
Unstoppable Gorg is great as far as its audio is concerned. Both the effects and music tie into the ‘50’s sci-fi style, sounding simultaneously really good and terrible at the same time. I should also bring to light the terrible voice acting as well; it’s perfectly kitsch and helps to tie everything together in a ’50’s nostalgia hit.

Can you stop the Unstoppable Gorg?
Overall, I really enjoyed playing The Unstoppable Gorg. It’s a very interesting take on tower defense with a great aesthetic, and despite its punishing difficulty, it is still fun. I would recommend you try it though; as much as I enjoy it, the tweaks it makes to the regular formula may not entice everyone.