So I decided to complete the trifecta and review the third and final of SEGA’s fighting games released just before Xmas. With Sonic The Fighters and Fighting Vipers already done, all that was left was Virtua Fighter 2.

Being more of a Tekken fan at the time of the series’ heyday, I never had the pleasure of sampling the delights of Virtua Fighter until a very brief go at Virtua Fighter 4 just a few years ago.

Truth be told, I didn’t get on with it all too well. How would I cope with going further back into the series’ history?

No fate but what you make…

While the previous two games I reviewed had storylines that never actually featured in either game, Virtua Fighter seems to be a bit more honest in its approach.

There are fighters at a tournament. End of story.

While there are apparently more elements of stories in subsequent games, it’s not something that you’ll have to worry about here. You pick your character and try to win the tournament. Get to it! 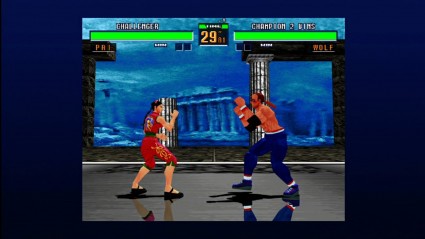 Fighting in the lost city of Atlantis…

One slip and you’re gone…
Once again (and I hope it’s the last time I say this for a while…), we’re looking at another SEGA three-button fighter, with one button for punch, one for kick and one for block. While this hampered SEGA’s other two titles in this trio of re-releases (more so Sonic The Fighters than Fighter Vipers), Virtua Fighter 2 manages to avoid the same repetition almost entirely.

Without the shield or armour gimmickry of its earlier reviewed cousins, VF2 is certainly an uncluttered game in comparison, but oddly it manages to be deeper. The damage dealt is high, and despite being a tad slower, it nails a certain tension that comes with knowing that one mistake can end your round as quickly as it took to start. It’s far more tactical in this respect.

Often fights start with each party daring the other to make the first move, and then laying in with a well-time flurry of fists and feet. Because of this, combos feel like they have to be better timed, while the floaty jump mechanics will leave you heavily exposed, encouraging you to keep the fighting on the ground. Because of that, the game fools you into a sense of intricacy, even though the mechanics themselves are pretty simple.

It needs to be said that Virtua Fighter 2 represents the biggest challenge of the three titles and, especially more so than the others, the diversity found as you work your way through the ranks of fighters is heavily felt. As a result, it’s simply a more stimulating fighter.

It’s true, the core gameplay hasn’t aged quite as well as, say, the original Tekken; but compared to its stable mates, it’s aged far better. Certainly the highlight of this little collection.

Better blocks…
Although much like Sonic The Fighters and Fighting Vipers in that the game is presented here in its original form, Virtua Fighter 2 is superior to the other two games visually. Notably, the character models look way sharper and the animation is significantly better, while the arenas are not only cleaner and more colourful, they’re simply more interesting to look at and fight in.

Round 1, Ready!
Once again, you’re faced with the type of musical arrangement that helped define the era of arcade popularity. Virtua Fighter 2 here takes more of a Street Fighter approach, blending a wide range of themes, mixing many styles from traditional Asian themes to darker guitar-driven numbers, all with the hard dance beats of which the genre has always been associated.

Is it an iconic soundtrack? Not for me, but those who grew up playing this will no doubt love it dearly. 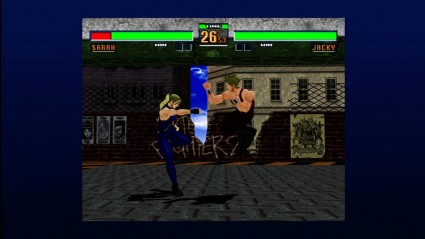 “Are you looking at me? You must be looking at me, there’s nobody else here!”
To put it bluntly, there is no one to play this game online against; it’s a dead community already. I tried for a combined hour over two nights and failed to find a single person to fight against. All I can tell you is that there are Ranked and Player matches. How well they work is anyone’s guess.

Suffice to say, if you’re looking at this for multiplayer matches, it’s probably best you get some mates around and stick with the local Versus mode…

Worth fighting for?
As you’ve probably worked out by now, Virtua Fighter 2 is easily the best release in this trio of digitally re-released fighters from SEGA. It’s certainly the one that feels like it has aged the least, and thusly feels the most like a legitimate fighter by today’s standards. That said, its peers have still undeniably aged better, and there’s greater value for money available on any digital marketplace.

As I said with Fighting Vipers, Virtua Fighter 2 definitely has some worth as a snapshot of fighting games from a bygone era, just be prepared to have your rose-tinted glasses tested if you decide to give this some time.