Aliens kidnapping humans and submitting them to painful tests is nothing new. How refreshing then, that puzzle game Warp turns this age-old cliché on its head, by letting you play the role of the alien desperately trying to escape your human captors.

Using, of course, some nifty alien abilities while solving some clever puzzles.

Zero tolerance
You play as little alien Zero, who is not having a good day. He is kidnapped by the evil General and locked up in an underwater lab, where men in white coats and masks gang-probe him within an inch of existence.

Luckily, Zero manages to break free but there are miles and miles of corridors, labs, storage rooms and vents between him and freedom. Luckily, the little guy has a unique trick up his sleeveless, tentacle-like arms. He can warp short distances, through walls and doors or into various containers to hide from scientists and soldiers as he makes his way to the surface and freedom.

Pop goes the human
Warp is best described as a stealth puzzler and it draws heavy inspiration from the likes of Metal Gear Solid, with its top down view, and Portal, with its clever puzzles. The action shifts effortlessly from stealth to puzzle as Zero sneaks past armed soldiers by warping and ducking from container to corner and trying to get past laser-fields, disable generators or getting from one end of a gangway to the other without being squashed by something heavy. The puzzles are generally quite clever but never so tricky to become discouraging.

As Zero gets closer and closer to the surface he discovers new powers and the puzzles evolve and become more elaborate as Zero gets stronger. The game is good at introducing you to the use of these various powers and then gently steps away to let you figure out how best to use them to solve a puzzle. A good example of that is Zero’s ability to create an “echo” of himself. Essentially, an echo is nothing more but a clone with a limited range, but it can pass through wall and act as a decoy to draw enemy fire. You can even trick soldiers to fire at each other or explosive containers using the echo, which becomes very handy when solving certain puzzles. 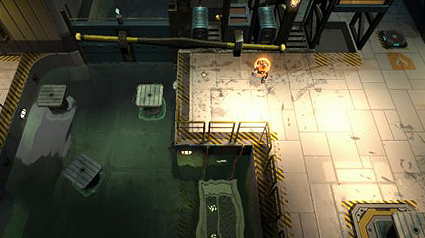 Someone left the tap running

One of the most important elements of Warp’s many puzzles are containers. They come in all shapes and sizes, from laser-proof cylinders to explosives barrels. Some are even so volatile that they will explode if Zero stays hidden in them for too long, killing both him and anyone unlucky enough to be within the blast-radius. On the other hand, this comes in handy for setting off chain-reactions, provided Zero can get to safety in time. The non-volatile ones can be overloaded with energy by rotating the left joystick, which makes them explode. This again can be used to cause a distraction or you can use it to knock out enemies.

While his ability to warp does give him an edge, Zero is generally a fragile little thing and can’t really withstand much trauma. Water is his kryptonite as it drains him of his power so he can’t warp and slows him down. This weakness is used to great effect in some levels that have been flooded, meaning you has to rely on good old-fashioned sneaking from corner to corner while avoiding the trigger-happy soldiers. One shot kills instantly, in which case you have to start from your latest checkpoint. Thankfully, checkpoints are generously spread throughout the levels and conveniently placed just before and after tricky bits, easing any frustration that might crop up

Although his body may be fragile, Zero is not without offensive capabilities. Just as you can warp into a barrel and cause it to explode by overloading it with energy, so can you warp into the body of humans and make them explode in a red mist of blood of guts. It’s delightfully gory and you inner sadist will likely jump with joy as your enemies start bellowing up to twice their size before they end up as sticky splats of red smeared all over the walls and floor.

You can actually complete the game without killing anybody, apart from the occasional boss. There is even an achievement to be earned for players who are willing to forgive and forget all the gang-probing and leave quietly, but watching your enemies go pop is one of those rare gaming treats that delights and excites, making it hard to play nice guy. 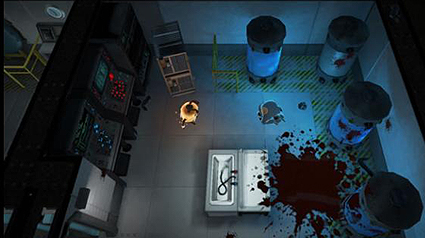 This red splat messed with the wrong alien

Along the way, Zero also collects small purple gummybear-like “grubs” scattered throughout the levels. These can be used for upgrades like silent running, faster movement, making echoes explode and so on. Grubs can also be won in the various challenges that are unlocked as you progress through the game. The challenges range from popping enemies before time runs out, to warping through a level as fast you can and so on and serve as a nice break from the puzzles.

Translucency
Warp is a good-looking game without being overly impressive. Zero himself is an orange translucent blob with black spindly arms and legs and his small size and overall charm gives him cute, almost childlike aura of innocence. In contrast, the surrounding lab with its many corridors and sterile rooms feels both oppressive and sinister and the graphics work well enough to convey the games overall sense of innocence escaping oppression.

You can, therefore, forgive the occasional drop in frame-rate and the weird clipping that sometimes occurs. Neither will affect the gameplay but it still feels a little sloppy to find error like these in a game that doesn’t exactly push the envelope for game graphics.

Chirps and tweets
The sound-design is more impressive with the delightfully squishy “pop”-sound from exploding enemies working especially well. On top of that you have the clanking and grinding of metal from barrels and machinery overloading, to Zero’s many cute “purrs”, “chirps”, “peeps” and “tweets”, which further endears= him to the player.

The scientists and enemies are all voiced but in the interest of cutting expenses, they are all voiced by the same actor working to a limited script. Luckily, he seems to be enjoying himself, so you can forgive the repetitive lines and tone of voice. 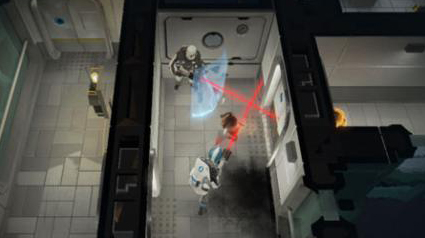 Cute contrast
Warp isn’t a very long game and its neither too difficult to finish nor too easy to breeze through. It balances itself just right between the two opposites by giving you a sense of constant progress, slight irritation when you hit a tricky bit and a fulfilling sense of achievement when you manage to get past it. The various challenges are a great addition that keeps the longevity going as they are, as the name suggests, quite challenging.

Warp’s ideas are fresh but don’t exactly break new ground nor do they really need to. The developers had a very clear vision for the game that they stuck with, and they have certainly managed to create a very charming little protagonist in Zero, whose abundance of cuteness is in stark contrast to the way he sadistically disposes of his enemies.

Still, you can’t help but feel that had the developers just been a little braver with some of the ideas, Warp could have shined even brighter. For instance, warping into a human and popping them like a balloon is fun but ultimately moot as you can’t really do anything with them once you are “in”.

Still, Warp is charming little gem that might only shine bright for a few hours before you complete it, but it’s got plenty of charms and clever ideas that are well-executed for you to be guaranteed some good wholesome fun while it lasts.