Do I really have to introduce this game? I mean, come on! It’s Worms! You all know how it goes. You control a team of 4 worms… and you fight other… worms.

Worms the franchise has been around for over a decade and as a result has often had to fight to stay relevant and fresh. Can Clan Wars help keep Worms alive and well, or does it belong on the end of a fishing line?

Well, kudos to Team 17 who have seen that the way we play games, particularly competitive games, has changed. Clan Wars is focused mainly on the idea of creating a clan (surprised?) and battling others online.

Before going into detail about how clans work, it’s important to note that there’s a robust single player and offline offering here as well. So those of you turned off by the idea of having to play online, good news. You don’t have to play online.

The single player campaign revolves around a mysterious adventurer called Tara Pinkleton and her desire to stop the evil Mesmer. Mesmer is apparently after a Golden Carrot that will enable him to control the worms so they can do his evil bidding. 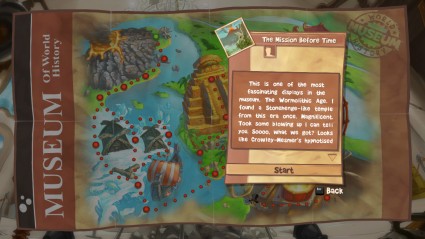 This is the story mode. Don’t read what it says. It’s all nonsense. In a good way.

It’s pure nonsense, but it’s written and delivered in such a way that it comes off as charming rather than annoying. This is probably down to the fact that the dialogue was written by a BAFTA winner and then delivered by another BAFTA winner. If you think you recognise the voice, you probably do. Reason being that the voice actress is Katherine Parkinson, better known as Jen from The IT Crowd or ‘that lady off the Maltesers adverts’.

It also gives the game the excuse to set the levels, both online and offline, in museum exhibits. That’s right, for some reason, this battle for an ancient artifact is taking place in museum dioramas. Like I said, don’t think about it too hard. Just enjoy it.

Tapeworm
This means the levels take place in one of 5 different settings. Feudal Japan, a viking setting, prehistoric era and so on. 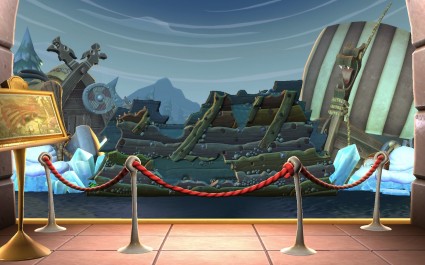 See the rope? It’s because it’s a museum. Like I said, don’t think about it.

The different settings are purely aesthetic, but keeps things fresh. As you’d expect from a Worms game, the levels aren’t just for show as they play a strategic role in how you approach the fight.

New for Clan Wars is dynamic water and objects that respond to the laws of physics. This means you can have some great fun with flooding your opponents, using bricks to crush them and getting thrown around by platforms that spin around. That’s not to mention your traditional landmines and other explosives that litter the battlefield.

Aside from that, it’s hard to say there’s anything new to how Worms plays. You’ve still got the same bazooka launching, wind compensating action as before, though the huge number of weapons gives the game a real strategic edge. If you’re looking to win your match, don’t let the cartoony graphics or silly one-liners fool you. Winning takes some real thought, some real skill and a little luck.

Flatworm
It’s safe to say that Worms’ strength has never been its graphics. Whilst they likely won’t win any awards, they’re certainly charming enough and help give the game an extra layer of character. 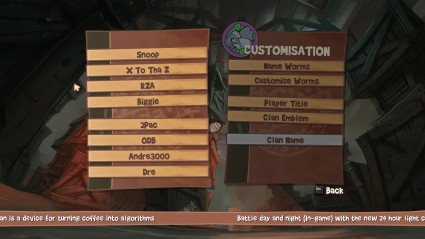 The music is fine, being neither outstanding or grating in any way. A special mention needs to be given to the voice over work though. The previously mentioned Katherine Parkinson is a great choice and whilst the writing won’t knock you off your feet, it’s undoubtedly a step up from your average game .

The customisation options available are pretty solid as well. Logos, victory dances and other accessories can be used to dress up your worms as you see fit, making them stand out in the middle of their micro war zones.

The customisation also goes as far as altering the voices and names of your worms. This means I now have a group of worms named RZA, Biggie, 2Pac and Dre. They constantly make cheese puns and will often resort to using flying sheep in the middle of a match. Which is great.

One of the really exciting things that Team 17 have put a lot of work into is the Steam Workshop connectivity. It’s hard to gauge how successful this will be, but by the looks of what the beta testers got up to, this could see the amount of levels and items skyrocket over time. 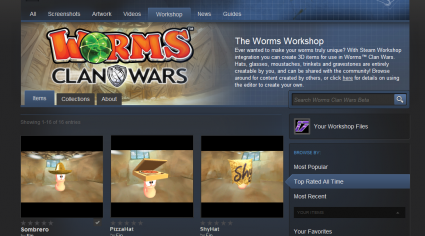 I can’t wait to see what else the community comes up with.

As mentioned, this game is focused on bringing classic Worms gameplay into the modern age through the use of clans, user-generated content and an external app that’s yet to be released. For a game about worms, this looks like it could have some serious legs.

Ribbon Worm
That’s right, there’s soon to be a Worms app. This will let you talk to your clan members outside of the game, look at stats regarding your team and hopefully allow you to organise an evening of worm murder whilst on the bus. It’s likely that online is where you’ll spend most of your time with the game as you battle to get your clan promoted to higher leagues.

10 new weapons brings the grand total of your arsenal up to 65. On top of the variety in weapons, you’ll also need to consider what class of worm you’re using. That’s right, Worms now has classes. Soldier, Heavy, Scout and Scientist all have their strengths and weaknesses, as you’d imagine, and it all adds up to a highly competitive experience where you’ll be cursing yourself, your luck, but never the game. Well, sometimes the game – but you shouldn’t. It’s always your own fault. 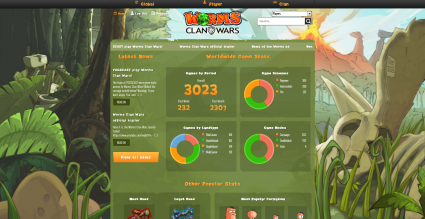 The app wasn’t available at time of review. It won’t ruin your experience if you never even use it to be fair.

Whilst there’s a not a huge variety to game modes (no capturing of flags, for example) there are a good number of customization options that keep deathmatches compelling. A huge array of weapon sets are available to pick from, all of which will have a massive impact on how you play.

Peanut Worm
At the end of it all, this is a great game that uses the Worms formula extremely well. With plenty of options to customize your games and a ton of weapons that all add huge to depth to how you play, it’s hard to say anything against it.

What’s really exciting though is the potential that Steam Workshop and the companion app offers. How this will pan out is difficult to predict, though I have faith that the Worms community will get behind this one and we’ll soon be seeing hundreds of new hats, new weapons and new levels ready to download soon enough.

So, if you have even the faintest interest in Worms, do yourself a favour. Download Clan Wars, convince some friends to buy the game as well and get a new clan up and running.

Alternatively, why not join clan ‘ThisIsMyJoystick’? We’re open to Worms of all ages. All we ask is that you don’t mind getting blown up.