As we prepare to move onto the next generation of gaming, I find myself reflecting on the games I’ve played recently and it’s fair to say I’m enjoying a bit of a golden age of gaming at the moment. Never mind the likes of Far Cry 3 and Sleeping Dogs played earlier in the year; lately I’ve been lucky enough to play Thomas Was Alone, Bioshock Infinite, The Walking Dead and now The Last Of Us; quite possibly the finest collection of games I’ve played in this or any other generation (our review of The Last Of Us will be out soon but in the interim just let me say if you have a PS3, you have to play this game). Life as a gamer is certainly good at the minute.

However (there’s always a “but” isn’t there), one thing I have noticed recently, is that more and more bugs seem to be creeping into these games.

Now I will instantly say that I do not include Thomas Was Alone in that list. I had no issues with that game at all, and I just wanted to mention it because it’s an absolute gem; but I’ve had problems with all three of the other games mentioned there. Problems with The Walking Dead were only minor (options not appearing when they should, the odd sound issue), and fortunately although there was a day one patch for The Last Of Us yesterday that caused a save game issue, it was quickly resolved by Naughty Dog.

I have to call out Bioshock Infinite, though, and also God of War: Ascension. Two games that I enjoyed, but that had horrendous problems throughout which really detracted from my enjoyment of the games. In Bioshock, I repeatedly had to go back over large chunks of game (45 minutes on one occasion, and one 25 minute section three times) because events failed to trigger, or an enemy got stuck in scenery.

One of those sections required me to shoot a guy stuck in a curtain in the elbow to progress as that was the only part I could see (new Internet meme there? “I took a bullet to the elbow”), but another time while I could hear someone shouting they were going to get me, it’s fair to say that wasn’t going to happen any time soon; I couldn’t find them anywhere.

At that point, I actually stopped playing for a few days because I was so fed up with it, which is a real shame for such a great game. 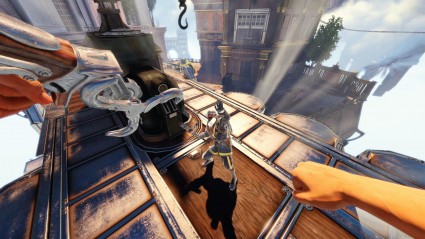 Attacking a bad guy in Bioshock Infinite. Much easier when they’re not stuck in scenery…

If that was pretty bad, God of War was even worse. This disappoints me most because God of War 3 was not only superb, but almost flawless. I can’t explain why there are so many issues with Ascension, but this is a game that caused my PS3 to crash repeatedly, resulting in a forced reboot and a wait while it verified the HDD was okay. It has also, so far, required seven patches post-release, and the latest actually failed to load, causing me to spend considerable time messing about with deleting, re-downloading, and once again dealing with a series of full crashes on my PS3. Then when I was able to play the game, I had numerous problems with sound cutting out (the subject of one of the many patches).

I lent the game to my good buddy Neil Hickton (you know, just gave him the disc, Sony style), and sure enough he then spent several hours trying to get it working due to the same patch install issues, crashes and so on. From a quick Google, I know this wasn’t isolated to the two of us either.

Now I understand that as games get more and more complex, the chance for things to go wrong increases because there’s simply more going on, but the fact that four of the last five games I’ve played have had problems is a real cause for concern. It’s worth noting perhaps that all these games were on PS3, a machine notorious for its programming difficulties and with well-known memory limitations, but until this series of games I’ve not really encountered any bugs to speak of whatsoever. 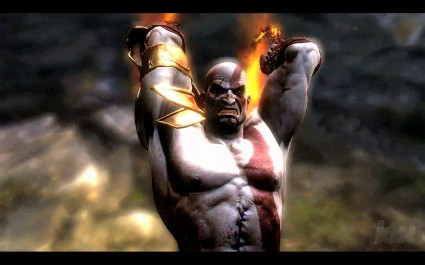 Kratos was also far from impressed at the bugs in his latest game; didn’t the developers know he had some mythology to murder?!

Is this perhaps a sign that it really is time for the leap to the next generation as developers struggle to cram their games into the limitations of the current gen consoles? Or does this suggest perhaps that game testing isn’t doing a sufficient job anymore? Could it even be that the sheer ambition of some of these games means we have to accept we will get the odd bug?

I can understand that scale and limitations may have impacted Bioshock as they tried to squeeze a PC game onto aged console hardware, but for first-party developers to have so many issues (I‘m looking at Sony Santa Monica here; the Naughty Dog issue appears to have been a one-off unforeseeable server issue) is really unforgivable, and I can’t believe that none of the problems in GOW: Ascension could have been picked up on before release.

Of course this problem isn’t entirely new either; problems with Skyrim in particular on PS3 are well-documented, and Bayonetta was also badly implemented. Though at least with these games I had fair warning and so I simply didn’t buy them. I won’t give money to people who can’t release a game that isn’t broken.

One positive coming out of the next generation is that PC, PS4 and Xbox One will all have very similar architecture, so porting between them should be fairly straightforward on the whole; not to mention that there is far greater power behind the new offerings from Sony and Microsoft. That means less time moving games between platforms, and more time making the code as tight as possible, so hopefully we will see a reduction in bugs.

It’s also fair to say that Sony has very much learned its lesson from this generation. Let’s not forget how cocky they were leading up to the PS3 launch; a cockiness that they have no doubt paid for since. We see that only now has the PS3 finally caught up to the Xbox 360 (with the Wii having finished its life-cycle well out of sight of either) after the total domination of the PS2 in the previous generation. We should also no longer have to spend untold minutes waiting for any patches still required to download now that the PS4 can handle this sort of thing in the background.

All-in-all, the future looks brighter for more than just shinier graphics. Bugs, patching, and so on, are probably not going to go away in the next generation, and while they’re not exactly the sexy side of gaming, if they can be addressed in a better way moving forward, that’s more than alright with me.

(This Is My Joystick also have a Youtube channel where, amongst all the trailers and video commentary, you can watch some videos of a few bugs we’ve encountered along the way. Enjoy!)